Ninety-seven percent of CFOs in the Deloitte CFO Signals Survey believe that a recession is on the way in 2020 or that one has already begun. The performance of the trucking industry, having experienced a precipitous decline in demand since September 2019, reflects this CFO sentiment and lends credibility that the recession is already underway. With global debt levels at record highs, today is when you must be examining your exposure to financially risky companies up and down your portfolio.

A Deep Recession or Depression

CreditRiskMonitor estimates that the average default rate for U.S. public companies is on a trajectory to soar above 12 percent during this correction, resulting in estimated losses of $1.2 trillion or more. That figure is derived by comparing historical default rates to today's record levels of corporate debt: 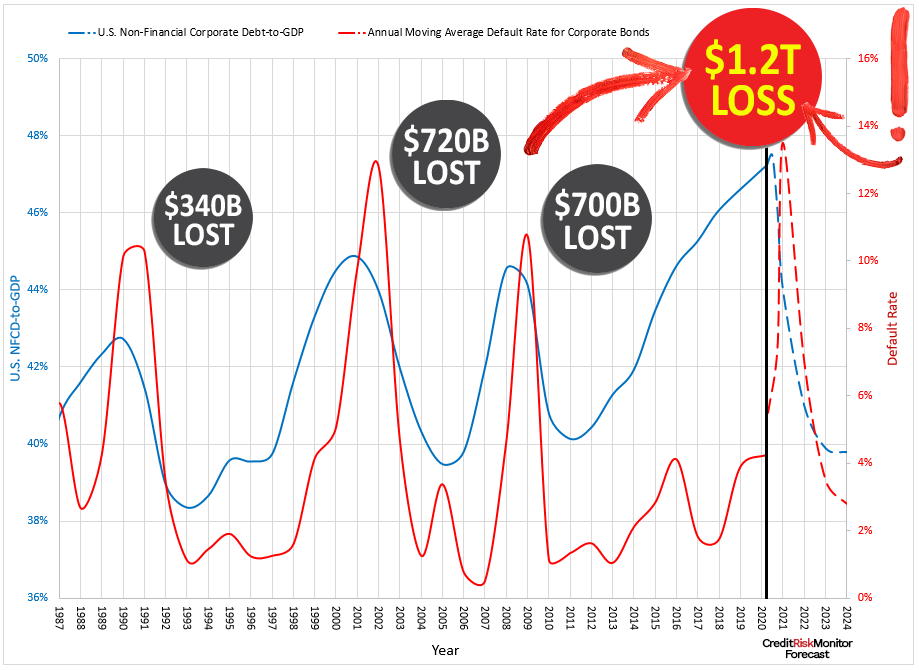 This analysis further reflects the sentiments of the Deloitte CFO Signals Survey and provides magnitude expectations for massive losses associated with the coming economic downturn. Waiting for the correction to start before engaging in proactive management of your risk exposure is a foolhardy policy.  Per historical precedence, there is rarely enough time to address financial risks once the market spooks since everyone is trying to make the same mitigations en masse.

CreditRiskMonitor’s AI-based risk analysis tools allow users to start managing their exposures up to 12 months or more before a bankruptcy filing.

One sector that is already ripe for review is trucking. On the whole, this group of public companies appears to be on solid ground. Yet once you dig into the individual names underlying the industry average, many notable players are in bad shape. The late 2019 bankruptcy of Celadon Group, for example, though partly precipitated by issues beyond a drop off in demand, was a warning.  Of note, Celadon was paying its bills in a timely fashion right up until it declared. All of the truckers highlighted below are also paying in a timely fashion, as measured by the DBT Index, which tracks payment history similar to Dun & Bradstreet’s PAYDEX® score (the DBT Index works on a "1" worst to "10" best scale). The takeaway is that payment history is not a reliable predictor of bankruptcy risk.

YRC Worldwide Inc. was the subject of a High Risk Report in September 2019. It currently carries a FRISK® score of "1," the worst possible score on the "1" (highest risk)-to-"10" (lowest risk) scale that has a 96%-accurate record of accomplishment when it comes to predicting bankruptcy risk. A score of “1” indicates that YRC Worldwide possesses a 10-to-50x higher chance of going bankrupt than the average public company. In a typical distressed, public company fashion, YRC Worldwide is continuing to pay its bills in a timely fashion, a clear example of the “Cloaking Effect.” Do not fall victim to payment-based cloaking of financial stress in this case since leverage remains elevated and the company’s free cash flow was negative through the first nine months of 2019.

YRC Worldwide management painted an upbeat picture during its third quarter 2019 conference call, but noted that the year had been "challenging" and that "operating results deteriorated due to depressed volume levels, which were particularly acute in the Midwest Rust Belt." Economic weakness is taking its toll, so management is focusing on "optimizing" its operations to "deal with the weak demand environment."

Risk professionals must review the liquidity subsection of the management, discussion, and analysis (MD&A) since the two people with the most insight into the stability of the company are responsible for the content of this section being materially truthful under personal liability which includes millions of dollars in fines and prison time.  If reading the MD&A isn’t currently part of your process, then you should really consider adding it, especially given the gravity of the deep recession potential. YRC's third quarter MD&A noted that in order to meet key debt covenants the company would need to cut jobs, eliminate short-term compensation incentives, and trim discretionary spending. It also highlighted that continued economic weakness could further impair its ability to maintain its debt covenants. Fourth quarter earnings results revealed that YRC's financial troubles had not turned for the better, as the company reported net losses for the quarter and year. Perhaps more concerning, the trucker experienced a 60% year-over-year drop in its available liquidity, with liquidity falling from $203.8 million at year-end 2018 to just $80.4 million in 2019.

USA Truck, Inc. has seen its FRISK® score fall from a "6" at the end of 2018 all the way down to a "2" as we enter 2020. A decline of four points leaves USA Truck with a risk of bankruptcy that is 4-to-10x that of an average public company in the coming year. The company's sales have sequentially declined over the last four quarters and its total liabilities are around four times larger than its market capitalization.

Management was very clear about the troubles it faces during its third quarter 2019 conference call, explaining that, "we're in the midst of an environment that is quite challenging," highlighting that there was a weakness in early fourth quarter demand relative to expectations, as well. Although management remains committed to improving performance, it entered 2020 expecting a "tough" year. The drop in the company's FRISK® is a clear warning to counterparties that they need to keep an eye on this trucker. A heavy debt load in a difficult market will limit management's options to deal with adversity.

Daseke, Inc. also has a FRISK® score of "3". That's an improvement from the worst possible "1" from a few months ago, but still well off of the "5" in late 2018. While the company has been cash flow-positive over the past 12 months, tangible net worth has declined to negative $99 million. CreditRiskMonitor subscribers have also been active by conducting careful reviews of the company in the last few months. Acting as a de facto Virtual Credit Group, our users’ research patterns during these reviews indicate a collective negative sentiment on the financial stability of Daseke. We have some of the most knowledgeable risk professionals, including 35% of the Fortune 1000 and thousands of other large businesses worldwide, using our website every day to analyze their counterparties. When a large enough group of credit professionals displays similar research behaviors on a specific company, our proprietary crowdsourcing sentiment AI affects the FRISK® score, in this case negatively.

In the middle of 2019, Daseke shifted gears in a big way, moving away from acquisition-driven growth to a focus on optimizing its existing business. It is working to cut costs and integrate previous acquisitions, but doing so in a difficult demand environment. That fact was highlighted in the third quarter MD&A, which explained that Daseke had to write down previous acquisitions by more than $300 million and saw a $23.5 million reduction in its liquidity. Although the company claims that the industry-wide troubles in the trucking space are actually helping it pick up additional business, close monitoring is necessary given the material change in corporate direction. Its liabilities are five times larger than its market capitalization.

With cracks already starting to show in the trucking industry and CFOs worrying that economic conditions are primed to decline, the time to prepare is now. Once a downturn snowball gets rolling, it will be too late. Avoid the avalanche of bad debt; CreditRiskMonitor has the tools you need to stay ahead of such risk. Contact us today to have a representative give you a free product walkthrough so you can see for yourself.