The Institute for Supply Management (ISM®) reported that U.S. manufacturing contracted further in December. The summary detailed widespread weakness: “Of the 18 manufacturing industries, three reported growth in December…15 industries reporting contraction.” Such a slowdown has affected a broad variety of operators, including companies within the trucking industry.

The FRISK® score uses a variety of data factors including stock market information, financial statement ratios, bond agency ratings and the Virtual Credit Group. Each of these components provide a distinct signal to the FRISK® score, allowing it to successfully capture 96% of public company bankruptcies for more than a decade. The Virtual Credit Group is the most unique factor as it leverages CreditRiskMonitor’s subscriber base, including credit professionals from more than 35% of the Fortune 1000 and thousands more from large corporations worldwide.

Credit professionals prudently monitor their extension of trade credit to commercial counterparties. Based on Q2 2019 Federal Reserve U.S. Financial Accounts, trade receivables and trade payables were $3.4 trillion and $2.5 trillion, respectively. This aggregation of trade has enormous influence on the daily commerce of purchasing and selling activity between companies. According to CreditRiskMonitor research, subscribers will exhibit disparate click patterns on a company’s commercial credit report – those characterized as normal behavior and those indicative of concern. A cursory review is generally considered normal and instances that involve in-depth research and analysis reflect concern. The latter actions oftentimes involve credit discussions with a company’s sales and management team, which are integrated within the computation of the FRISK® score.

The Virtual Credit Group will: 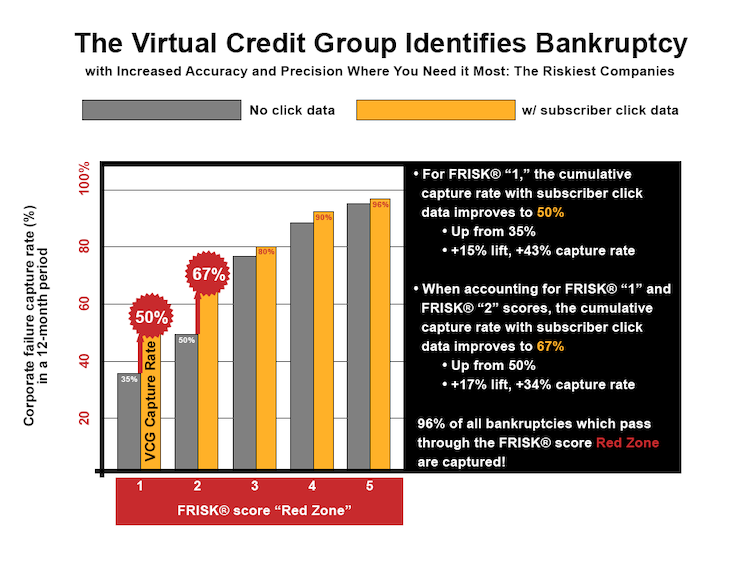 YRC Worldwide has maintained a FRISK® score between “1” and “2,” which demonstrates high financial risk versus the trucking industry. Over the past two quarters, the Virtual Credit Group provided a neutral to negative signal to the FRISK® score: 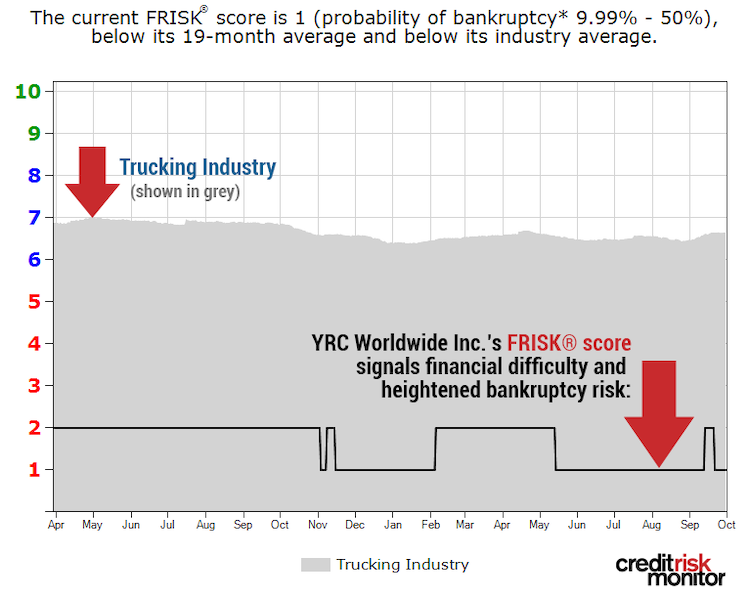 This behavior likely reflects concern about the company’s debt coverage. In September 2019, YRC Worldwide structured a new Senior Secured Term Loan, which contained a new financial covenant that requires a minimum trailing 12-month adjusted EBITDA of $200 million. Between the second and third quarter, total EBITDA was $108.6 million. If that performance is maintained on a run-rate basis, the company will be within compliance.

However, macroeconomic conditions remain a critical consideration. If shipment volumes fall off, YRC Worldwide would run afoul of this covenant. Net interest expenses serve as a heavy burden as well. Across all primary financing, including term loans and finance leases, the company's weighted average cost of borrowing is 11.9%. Its operating leases carry a weighted-average discount rate of 11%. Protracted economic weakness could lead to default and potentially end in a bankruptcy filing.

CreditRiskMonitor also released a High Risk Report on YRC Worldwide Inc. to assess the company’s financial profile up to the third quarter of 2019.

The Virtual Credit Group provides a unique perspective that helps determine the financial risk of public companies. Across the motor freight transportation and warehousing (SIC 42) industry are 10 other U.S. logistics operators exhibiting financial stress, including operators like USA Truck, Inc. and Daseke Inc. Large trucking operator, Celadon Group, Inc. also filed for bankruptcy in December in part due to “legacy and market headwinds.” As the likelihood of an economic downturn continues to intensify, public companies across cyclical industries should be monitored closely. Such events have major implications for trade credit and supply chains – make sure your company doesn’t get impacted.