Russia’s war with Ukraine caused immense capital flight that pushed Russia’s government yields above 10% and led bond-rating agencies to downgrade its sovereign ratings to “C,” one notch above default. Countries across Europe, North America, and Asia-Pacific have imposed sanctions on Russian corporations, which has disrupted both supply chains and international financing. Sanctioned companies have debt service restrictions while current and future business between other countries has been impaired.

Many of the nearly 1,400 companies in our Russia coverage have been subject to sanctions, which limits business-to-business buy, sale, and investment transactions. As of May 2022, nearly two-thirds of all scored companies in Russia are trending in the high-risk FRISK® score "red zone." The FRISK® Stress Index for Russia has increased from 1.5x to more than 2x, which ranks among the riskiest countries worldwide, and total risk is up by 239% since 2007. 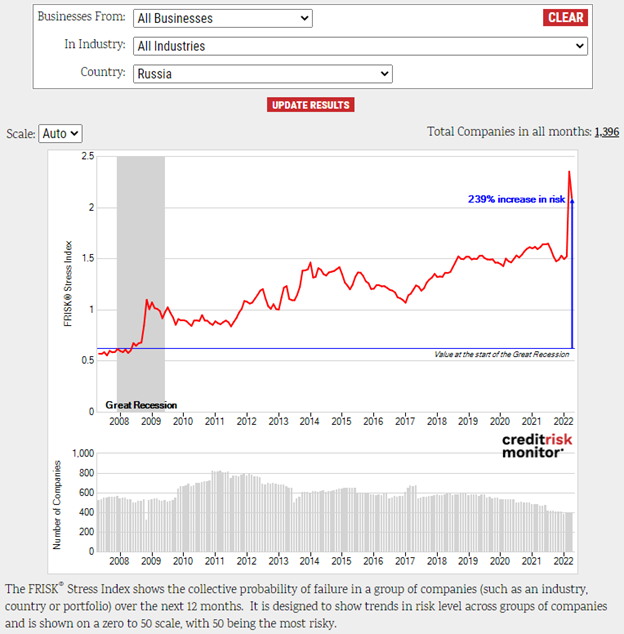 In addition to transactional sanctions, Russian public companies have also observed significant increases in stock price volatility and market capitalization declines, with some losing most of their value. Effectively, Russian companies have lost support from offshore creditors and their ability to raise equity capital is diminished. Also, many offshore creditors require repayment in their domestic currency rather than Russian rubles due to sanctions, which is an extra headwind for financially distressed companies.

The CreditRiskMonitor FRISK® score places the highest risk Russian companies into scores of "5" or below, also known as the red zone indicating above-average bankruptcy risk, on the "1" (highest risk)-to-"10" (lowest risk) scale. The FRISK® model incorporates financial statement ratios, stock market performance, bond agency ratings from Moody’s, Fitch, and DBRS Morningstar, and the aggregate risk sentiment of our subscriber base.

Below are eight financially distressed entities that have a material proportion of sales outside of Russia:

Total liabilities were converted from Russian rubles to U.S. dollars ($) and are valued in thousands.

All the companies listed above also have exposure to foreign currencies including U.S. dollars, euros, and yen, among others. Although the ruble has fully recovered since the invasion on Ukraine, sanctions still inhibit payment in rubles and many companies have limited USD liquidity.

In short, doing business in Russia even with its most renowned operators has become challenging, if not near impossible. So many companies globally have withdrawn their operations and investments from Russia. Meanwhile, a Harvard Business Review editorial concluded that companies are fundamentally better off curtailing operations in any environment that violates human rights:

“The Russian invasion of Ukraine changed the role of business in their response to sanctions. Most notably, many firms have self-imposed sanctions, restrictions, and withdrawals far beyond what government sanctions required. But even more important, these responses illustrate a new operational approach for companies doing business in other countries with reprehensible human rights violations."

Sanctions have delivered significant financial stress to the Russian government and corporations alike. Overall, many Russian companies have dropped into – or have sunk into – the FRISK® score red zone, indicating heightened financial stress and corporate failure risk. Companies with debt denominated outside of Russian rubles will have difficulty servicing such debt and ultimately find it difficult to find future business. Companies that source new counterparties outside of Russia, i.e. from geographically safer territories, inherently eliminate concerns involving company sanctions and financial risk. Contact CreditRiskMonitor to learn how you can use the FRISK® score to keep your company informed on sanctions and the best options for finding new partners.