Debenhams Plc entered Administration in April 2019, one of the largest department store collapses of the last several years. Leading up to this event, commercial credit reporting entities may have signaled low financial risk due to Debenhams' prompt payment behavior in the months leading up to its failure. CreditRiskMonitor’s unique FRISK® score, in contrast to competitors’ scores, signaled financial stress and heightened failure risk in Debenhams for more than 12 months prior to its filing.

CreditRiskMonitor is a leading web-based financial risk analysis and news service designed for credit, supply chain and financial professionals. Subscribers include thousands of risk professionals globally, including those employed by more than 35% of the Fortune 1000. A few important features include:

Debenhams generated more than £2 billion in annual sales and seemingly had modest financial leverage. The company continuously paid its bills on time, as indicated by our Days Beyond Terms (DBT) Index over the past year, even in the three months directly before filing for Administration. Our research shows that public companies exhibiting this prompt payment behavior mask their financially distressed condition, also known as the cloaking effect.

Unfortunately, some commercial credit reporting entities provide risk scoring models that rely on trade payables data (including Dun & Bradstreet’s PAYDEX® score), which misinforms trade creditors about failure risk. In other words, credit professionals that rely on these tools are likely to be blindsided and left to deal with significant financial loss – this calamity may have occurred with Debenhams.

In Debenhams’ credit score history, we look at the graphic below to see how the DBT Index illustrates very healthy payment behavior (green row). Our proprietary FRISK® score, on the other hand, shows extreme financial stress for 12-plus months in advance of the failure. The FRISK® score ranges from “1” (highest risk) to “10” (lowest risk).

In other words, even while credit professionals are recognizing prompt payment, there is still significant underlying risk to creditors. A FRISK® score of “1” is the highest risk of failure, indicating a failure probability rate as high as 50% within the next 12 months. Compare this to the risk level in your rank-and-file public company that has an approximate 1% risk of failure across any given industry. Also observe the impeccable timing in the trend of the FRISK® score:

Notice how the FRISK® score incrementally declined from “7” to “1” over the period. Essentially, CreditRiskMonitor subscribers doing business with Debenhams would have been alerted of increasing financial risk in January of 2018 and would have had ample time to evaluate the situation. In the months thereafter, trade creditors being aware of its problems, would have taken action to mitigate risk.

Despite the smoke and mirrors of steady sales, modest financial leverage, excellent payment behavior and the supporting words of management – the FRISK® score consistently identified Debenhams’ high risk of failure.

Debenhams' business was consistently profitable in the years leading up to fiscal 2018. That said, its U.K. same-store sales were steadily declining over the period, which was partially driven by broadly poor consumer confidence (concerns surrounding Brexit haven’t helped). Operating expenses were slowly rising, too. Operating margins effectively declined from mid-single-digits to low-single-digits in the last few semi-annual periods and cash flow was crimped substantially. This essentially turned a slow motion problem into a liquidity crisis. For example, see Debenhams’ poor liquidity metrics below: 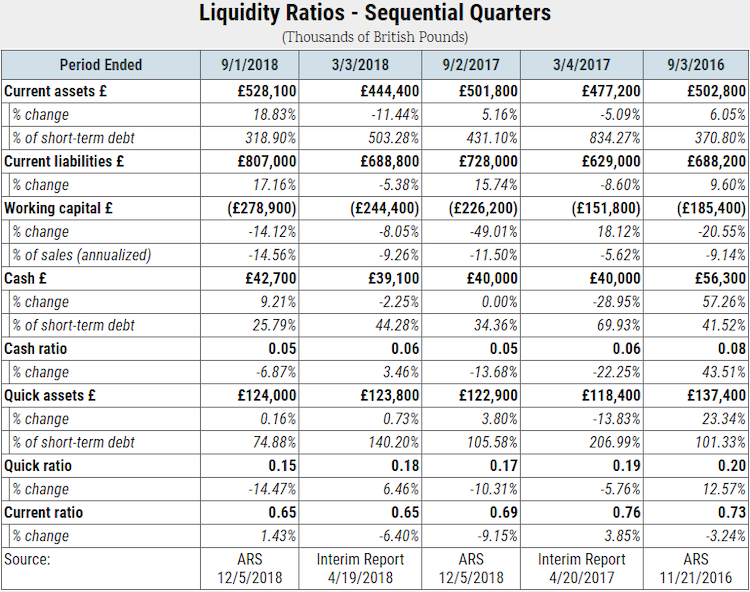 Its cash, quick, and current ratios all ranked in the bottom quartile when compared against industry peers in the last five reported semi-annual periods. With weak performance, Debenhams was unable to pull together adequate financing. Sports Direct International plc did offer a £150 million equity capital injection but it was rejected. As a result, secured lenders stepped in to take control of the business.

Debenhams’ Administration filing may have surprised some, but public company financial stress occurs more often than most think. Payment behavior is not a reliable indicator of financial risk as Debenhams clearly illustrated the cloaking effect problem. Fortunately, many CreditRiskMonitor subscribers take advantage of our worldwide service and use the FRISK® score to easily monitor all of their risk exposure – helping them identify instances that may turn into corporate failure. If you would like to receive a free risk assessment or more information on credit stress in the retail sector, please contact us today.