The McClatchy Company, one of the nation's largest newspaper publishers, has filed for bankruptcy protection. Based in Sacramento, Calif., the Chapter 11 filing on Feb. 13 was made in order for the company to keep its 30 newspapers afloat while it reorganizes more than $700 million USD in debt, 60 percent of which would be eliminated.

The bankruptcy is yet another in a long line of examples of public company failure being caught by our proprietary FRISK® score. In fact, all the way back in 2017, our FRISK® score was predicting increased risk, which we talked about in our McClatchy Company High Risk Report. As the years rolled by and their FRISK® score remained anchored to a "1," we continued to warn our subscribers to make whatever business pivots were necessary to avoid unnecessary exposure to a potential bankruptcy. 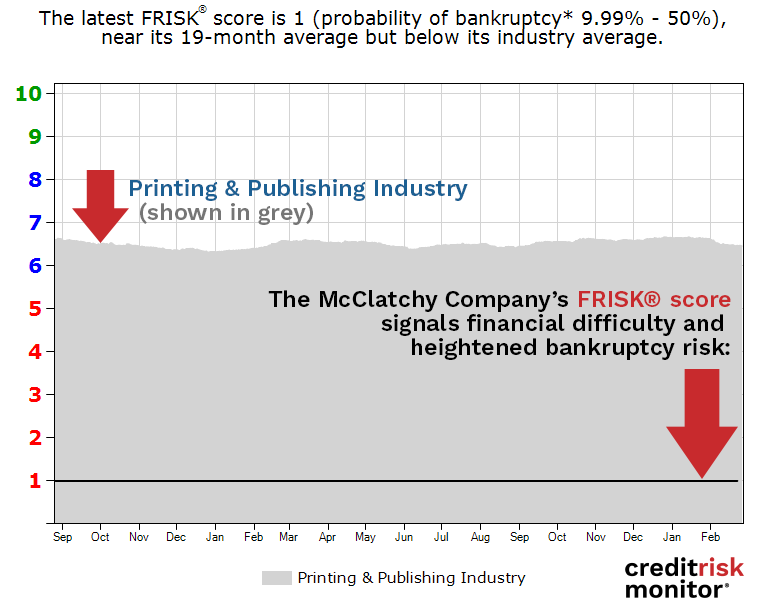 This Bankruptcy Case Study will give a postmortem on what finally doomed The McClatchy Company after an extended struggle to stay alive. McClatchy’s filing foreshadows further cost-cutting and retrenchment for one of the biggest players in local journalism, at a time when American newsrooms are straining to cover their communities amid declining ad revenue and dwindling resources. In fact, 20% of all U.S. newspapers have closed since 2004, and the sector has shed nearly 50% of its jobs.