As foreshadowed in our High Risk Report in May 2017, the "worst case scenario" unfolded for Cumulus Media Inc. The radio station owner filed for Chapter 11 bankruptcy restructuring in late November. Notably, its FRISK® score of "1" had indicated heightened bankruptcy risk for more than one year prior that event, particularly when compared to the broader Radio Broadcasting industry as seen below: 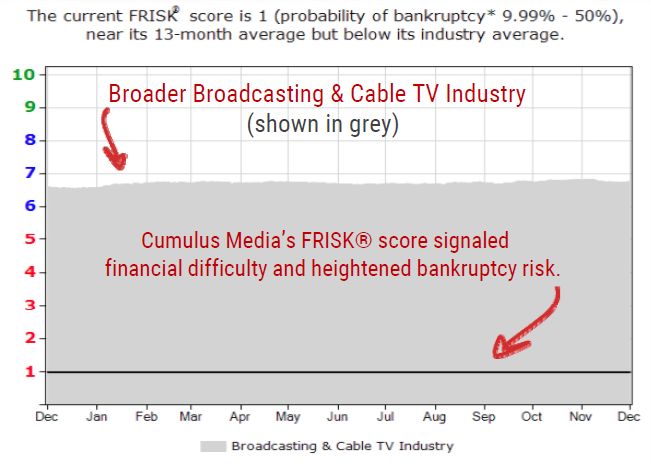 This Bankruptcy Case Study will demonstrate key risk factors that appeared on the CreditRiskMonitor service prior to Cumulus' eventual failure. The company's poor leverage metrics were particularly concerning, specifically as its total-debt-to-EBITDA ratio became extremely elevated by the first quarter of 2017. Shortly thereafter, Cumulus management began talks with its lenders and bondholders to address its unstable capital structure. Chapter 11 was, unfortunately for unsecured creditors, the outcome of those discussions.