Integrated support services operator Carillion PLC and its related companies are now in liquidation. It's a ghastly and rather abrupt decline for the U.K.-based corporate parent which dipped its proverbial toes into many different waters: they built hospitals, maintained prisons, arranged project finance and even provided meals to schoolchildren.

Carillion's FRISK® score plummeted from the top of the high-risk "red zone" of bankruptcy risk all the way down to the bottom, dropping from a score of "5" (0.87-to-1.40% chance of bankruptcy in the subsequent 12 months) in early March 2017 to a "1" (9.99-to-50%) just six months later in October. CreditRiskMonitor leverages this highly accurate score, which combines stock market capitalization and volatility data, financial ratios, bond agency ratings and crowdsourced subscriber behavior measuring, into a formula which is 96% accurate* in determining public company bankruptcy risk: 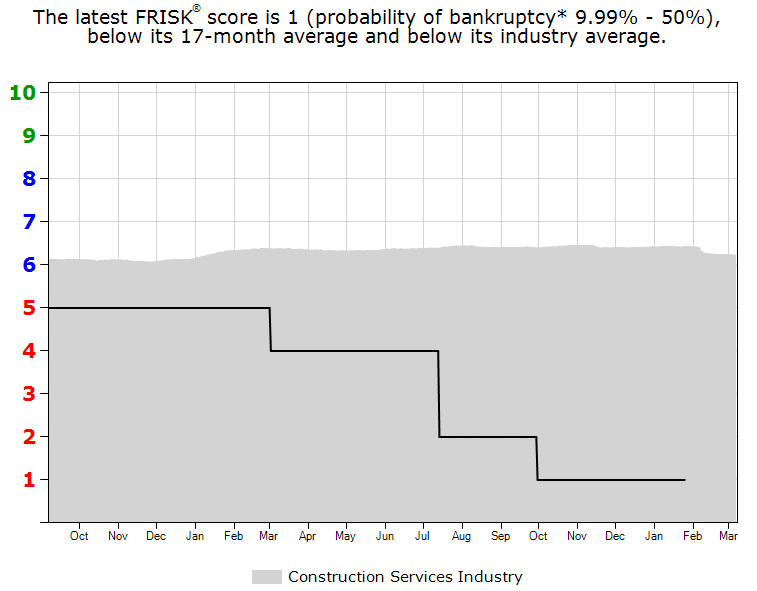 Carillion upped their propensity in taking on debt while operating and net income plummeted in 2017. As 2018 approached, the consequences were nothing short of disatrous. Considering pensions alone, Carillion was swamped by liabilities of at least £2.2 billion; their pension deficit stood at £580 million when the calendar turned. Less than two weeks after this news broke, they were bankrupt.