Tax reform has been a major tailwind to recently reported corporate earnings, as the U.S. statutory corporate income tax rate was reduced from 35% to 21% as part of the tax legislation enacted last year. Some other benefits were changes to capital expensing, now including bonus depreciation, and reductions in taxes on cash repatriation for multinational companies. On the other hand, this legislation also has guidelines that materially reduce tax-related cash flows. In fact, corporate cash flow streams are now lessened where:

Put another way, companies that have net interest burdens that exceed 30% of reported adjusted taxable income will be adversely impacted, all else remaining equal. Logically, these are businesses that are highly dependent on debt financing and, even more so, ones that have relatively more expensive debt costs. These financing circumstances are characteristic of lower-grade junk debt issuers.

Regarding NOLs, the benefit from NOL utilization is reduced by the variance in the old and new effective tax rate. Additionally, companies will no longer be able to carryback NOLs and obtain refunds of taxes paid during the previous two-year period. Thus, companies that were utilizing carrybacks will no longer have this option, and in the event of distress, it would be more difficult for a business to stage a recovery. We think this adjustment will similarly funnel down and impact junk debt issuers the worst.

In a previous report, Preparing Today for the Next Contraction in Credit, we evaluated the pace at which aggregate U.S. corporate financial leverage expanded up until the end of 2016. We estimated that the median debt-to-asset ratio rose by approximately 25% over a six-year period. This is a huge increase. We also found that debt servicing ability simultaneously weakened, particularly demonstrated through a decline in the median interest coverage ratio (calculated as net interest expenses over annualized EBITDA). Many corporations in the population that fell below the median had especially poor credit quality, which were attributed to factors such as above-average leverage, low or negative equity, and subpar interest coverage.

During the middle of 2017, it was affirmed that the junk bond market ballooned to approximately $2.5 trillion, the highest level recorded in the last decade. Junk-rated corporations that lose a significant portion of their tax write-offs, either through limitations on interest expense deductibility or NOLs utilization, will have materially weakened after-tax profitability. The scarier scenarios are junk-debt businesses with very thin profit margins that would be pushed into net losses by the tax law changes. Furthermore, risky companies with less after-tax cash flow streams could realize incrementally higher costs on capital overtime.

Corporate debt has also continued to increase over the last few quarters. In fact, non-financial corporate debt (NFCD) pushed to a new record high in the first quarter of 2018. Amid this persistent financial leveraging, risk professionals need to be wary of junk debt companies issuing more debt and/or those which have large near-term maturity walls. Right now, there are many large junk debt corporations working through these dicey financing transactions. There are hundreds of companies that could be added to the list if we look out a couple of years, as well.

There are many junk debt issuers that are exposed to the adverse effects stemming from the recently adopted tax reform, so it’s important to be prepared. As a part of the CreditRiskMonitor service, our proprietary FRISK® score identifies U.S. public company financial stress and bankruptcy risk with 96% accuracy. Any company that receives a score of "5" or less is within what we call the FRISK® "red zone." This is the bottom half of the "10" (lowest risk) to "1" (highest risk) FRISK® score. Our FRISK® score chart displays each score's corresponding probability of bankruptcy:

However, companies that maintain a FRISK® score between "1" and "3" are considered to be the riskiest. For instance, a company with a FRISK® score of "3" indicates that its financial risk is about three times more than your average public company. All risk management professionals, whether in credit or procurement, need to be wary of businesses that trend in this high-risk range.

Eastman Kodak Company (NYSE: KODK), a well-known name in the commercial printing and imaging business, is working through its own unique financial challenges. The company's FRISK® score has trended lower over the last 12 months and is now deep in the red zone at a bottom-rung "1," as shown in the chart below. In fact, this score currently indicates severe financial distress and an elevated probability of bankruptcy: 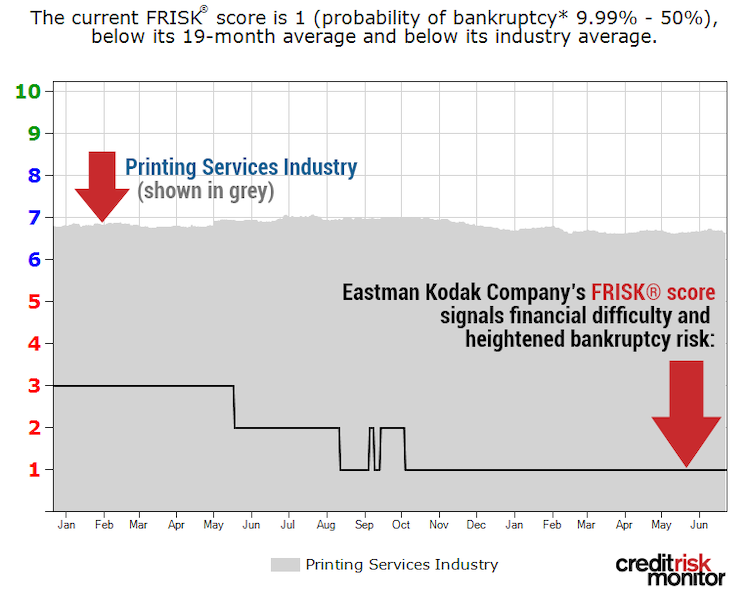 Between the fiscal year periods ending Dec. 31, 2016 and 2017, Eastman Kodak's deferred tax asset balance declined by approximately $287 million. Most of this decline, or $202 million, was attributed to the reduction in the U.S. tax rate from 35% to 21%. Therefore, tax reform had a negative impact on the company. This decrease in its deferred tax asset was largely offset by Kodak's valuation allowance falling by $440 million, reflecting improved profitability in a foreign location. A valuation allowance is established to reflect the uncertainty of the company's ability to utilize its NOLs. Therefore, this accounting transaction was an overall positive given its net deferred asset improved from $19 million to $172 million.

Eastman Kodak reported $95 million in net profit for the period ended Dec. 31, 2017, which appears good on the surface. However, all of that profit was attributed to a $110 million income tax benefit, largely associated with the release of a valuation allowance. So, we can see that improved foreign profitability was certainly helpful but tax reform was a negative for the firm. Ultimately, Kodak's future will depend greatly on whether or not it can achieve sustainable profitability going forward.

Commencing with the first quarter of 2018, Eastman Kodak has shown a stabilizing trend in net sales on a trailing twelve month basis. However, its trailing twelve month gross margin dollars have declined 14% on a year-over-year basis and, even worse, operating margins fell from 9% to 3.8% after backing out one-time items. Unfortunately, this adjusted operating margin percentage was the lowest level recorded since the company emerged from bankruptcy in 2013. Moreover, if the company continues to experience substantial margin erosion, it may be unable to realize a portion or all of its NOL carryforward.

Its deferred tax asset balance being maintained is significant given the firm already has a weak liquidity position. Carryforwards being reduced would impact cash flow, which is concerning given free cash flow generation has been consistently negative over the last few years. If you count Kodak as a customer or supplier, you will want to monitor the impact of the recent tax change closely.

The changes in the tax code certainly provided a tailwind to earnings and cash flow for the aggregate of U.S. corporations through lower tax rates, in addition to other benefits. However, the changes also introduce headwinds to businesses that already have poor credit quality, which come through limiting interest expense write-offs and shrinking NOLs. Eastman Kodak specifically had to reduce its deferred tax asset balance and it remains in deep financial trouble.

Among the many companies adversely affected by the tax code changes, highly distressed operators will have more difficulty staging turnarounds. Therefore, risk professionals will need to monitor risky counterparties even more carefully as financial distress and bankruptcy risks are now magnified. The CreditRiskMonitor service provides extensive and highly accurate commercial credit report coverage to stay ahead of such hazards.