Toys "R" Us: Forced Into Bankruptcy by Trade Creditors

It's rare for a retailer such as Toys “R” Us to file for bankruptcy right before the holiday season, but it appears the retail giant didn't have much choice in the matter. Almost in unison, suppliers for Toys “R” Us started to restrict its access to trade credit, setting in motion a liquidity crunch. This scenario highlights the vital-yet-commonly overlooked role trade creditors have in a company’s financial structure.

While suppliers are always looking to grow sales, ensuring that they get paid for their wares is also of prime importance. When a business-to-business customer’s financial condition is unstable, suppliers often conduct research and analysis to assess the amount of risk involved. If deemed necessary, the credit manager will implement stricter payment terms or even halt shipment of inventory entirely.

CreditRiskMonitor has been tracking the research activity of trade creditors as part of its web-based service for nearly a decade. While methodology varies by credit department, we have found that certain patterns of research are indicative of concern about a company's financial strength. In some cases, this anonymous crowdsourced subscriber behavior can actually have a negative impact on the FRISK® score. Toys “R” Us already had the lowest possible FRISK® score and subscribers’ research activity materially increased weeks in advance of the bankruptcy filing. This activity essentially highlighted extreme “nervousness” across a portion of the company’s supplier base.

Debt-laden Toys “R” Us' deteriorating financial condition was slow and painful. In fact, Toys “R” Us was in compliance with debt covenants and working closely with Lazard, a financial advisory firm, to refinance its upcoming debt maturities just prior to its filing. Unfortunately, news headlines of a potential bankruptcy at the toy retailer led multiple suppliers to simultaneously require cash deposits and faster payment. Toys “R” Us simply couldn't come up with the cash.

Melanie Teed-Murch, president of Toys “R” Us Canada, summed it up in a court filing: “Since the media reports of a potential Chapter 11 filing, a number of suppliers have sought to reduce their potential exposure by requiring deposits, cash on delivery or compressed payment terms, putting a strain on the Canadian business’ liquidity."

Yet this outcome was not a surprise for some risk managers. Toys “R” Us' FRISK® score stood at the worst possible rank of "1" for several years now. This level indicates a 10% to 50% probability of bankruptcy within a 12-month period. A bottom-of-the-barrel FRISK® score such as this is a glaring indicator to prepare yourself for – or to avoid altogether - a business relationship with a company experiencing severe financial distress, i.e. default and/or bankruptcy.

Toys “R” Us closed on $3.1 billion in debt financing; the court has only approved $2.2 billion in DIP financing and a hearing is scheduled for Oct. 10, 2017, to grant access to the full amount. It is still unclear which of the retailer's creditors will be paid and how much. Larger suppliers tend to receive a higher priority than smaller ones in a bankruptcy.

Toy manufacturers Mattel, Inc. (NASDAQ: MAT) and Hasbro, Inc. (NASDAQ: HAS) are, as you might expect, among the largest creditors. Each will be impacted by the bankruptcy but both are financially strong businesses nonetheless. As of October 2017, these toy makers maintained FRISK® scores of "9" and "10," respectively. Counterparty risk is relatively low here.

Publicly traded JAKKS Pacific, Inc. (NASDAQ: JAKK), however, is worth watching fairly closely. Management stated last week that it expects to report a net loss for the full year, in part due to bad debt expenses. It's too soon to tell how much of an impact the Toys “R” Us bankruptcy will have on JAKKS, but it's clear that the company is already dealing with trade credit issues.

It’s also worth thinking about JAKKS on a go-forward basis. Toys “R” Us may need to source product more cheaply in the future if it plans to compete better – which could mean lower gross margins for suppliers. Toys “R” Us might also reduce its orders if it chooses to curtail its brick-and-mortar footprint, leading to lower sales figures for JAKKS. Trends like these are taking shape throughout the retail industry and JAKKS is not as well positioned financially to handle industry changes compared to its larger peers.

JAKKS said it expects to remain EBITDA positive for 2017, but the figure will be lower on year-over-year basis. That's not a particularly good trend. Over the last 12 months JAKKS' FRISK® score declined deeper into the "red zone," signaling increased financial risk: 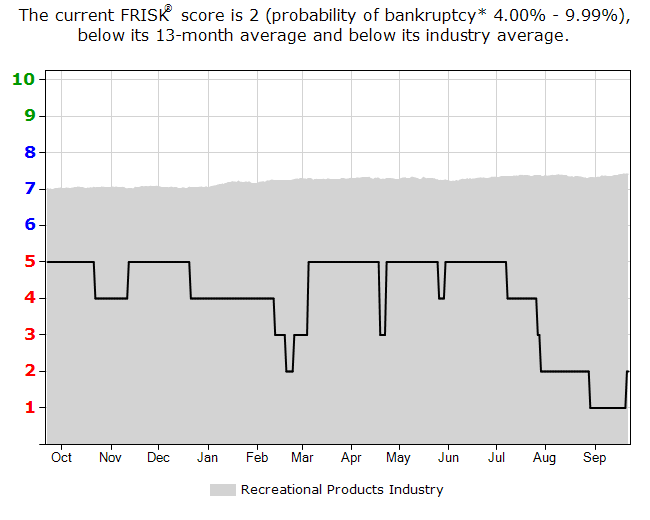 Part of the decline in the FRISK® over the last quarter was caused by subscriber crowdsourcing. Financial counterparties are, once again, highlighting a name that should be followed with heightened scrutiny through their own research activities. Compared to a recreational products industry average of roughly “7,” JAKKS’ current FRISK® score is currently a “2” in October 2017. This indicates a 4-to-10% probability of bankruptcy during the next 12 months.

We can see that the Toys “R” Us bankruptcy was signaled in advance by the FRISK® score and subscriber crowdsourcing confirmed the crescendo that accompanied the final downturn. Risk management professionals use this exclusive data to their advantage to help protect against counterparty financial risk. To that end, we believe JAKKS is a name you should be following.

What the Toys "R" Us bankruptcy illustrates best is the domino effect that can be sparked by restricted trade credit. It is a reminder that trade credit is essential for funding working capital at many firms. With less of it, firms can run out of cash. Given how many leveraged operators exist in the retail landscape, trade credit is likely to be an increasingly important issue to monitor. CreditRiskMonitor subscribers, meanwhile, have an inside glimpse of what's going on because of the inclusion of crowdsourcing in the FRISK® score.