In August, multi-billion dollar telecommunications operator, Windstream Holdings Inc., refinanced more than $1.4 billion in bonds and issued second quarter earnings. Both of these announcements were modest incremental positives for the business, but unfortunately it remains financially distressed. CreditRiskMonitor’s proprietary FRISK® score, which measures corporate financial stress and bankruptcy risk, is flashing a warning signal for Windstream.

Windstream has been trending at a FRISK® score of "1," the lowest possible rating on the “10” (healthiest) to “1” (riskiest) scale, for many months. Part of this high-risk assessment has been determined by CreditRiskMonitor's unique subscriber crowdsourcing component. The click data on the web-service shows when risk analysts – our subscribers – are concerned about a particular business, which is then reflected in the FRISK® score. These risk professionals are employed by corporations around the globe, including more than 35% of the current Fortune 1000.

Risk professionals use the FRISK® score primarily as it is 96% accurate in predicting public company financial stress and bankruptcy risk. This highly accurate rate is synthesized as the model uses multiple, high-quality inputs to calibrate a score. Most of all, the model provides a forward outlook of one-year and it is updated on a daily basis, which is a much more timely review of risk compared to traditional financial scores on public companies. 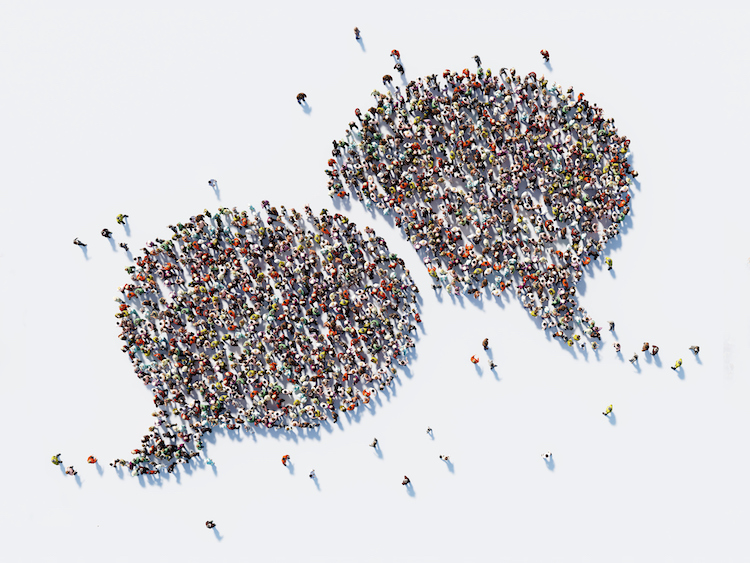 Subscriber crowdsourcing data is proprietary to CreditRiskMonitor and has been proven to identify company financial stress and bankruptcy risk. CreditRiskMonitor collects and analyzes the anonymous research activities of its subscriber base, and has found that certain click patterns within its commercial credit reports can demonstrate concern about a company’s financial health. Effectively, this information can help identify heightened financial risk faster and with more precision on a case-by-case basis.

Certain risk management groups are not subject to Fair Disclosure regulation, which allows them to have access to important non-public information. These risk professionals are not only entitled to highly detailed conversations with management teams, but they can also reach out to special groups within their respective industries, including creditors. There are many incremental factors that ultimately determine whether a company survives or fails, but having access to this aggregated research activity is especially useful when a company is in financial trouble. Subscriber crowdsourcing gives risk professionals a cutting edge way to stay ahead of financial risk.

In the case of Windstream, its FRISK® score has been negatively affected by subscriber crowdsourcing for nearly one calendar year: 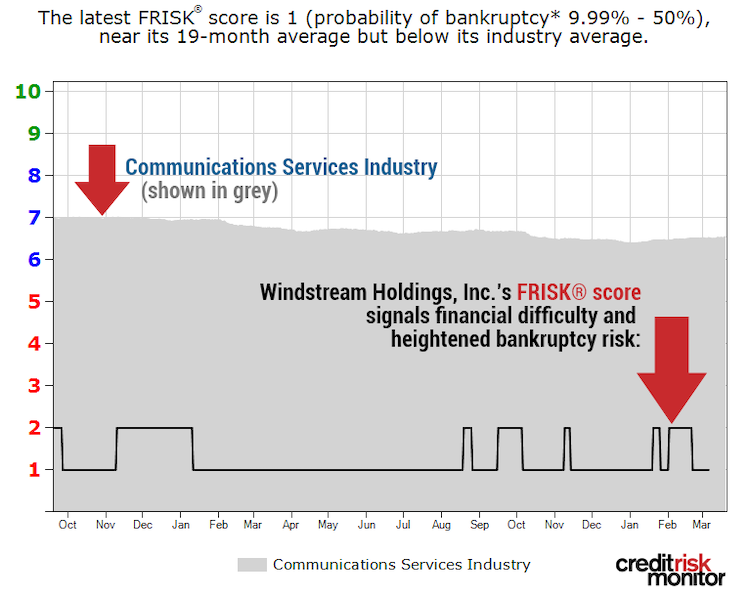 Specifically, the impact began in September of 2017 and danger remains present. In effect, crowdsourcing requires many analysts from different firms to be conducting deep-dive reviews to trigger patterns that are categorically deemed “high-risk.” The ongoing nature of the impact at Windstream is a troubling sign, and not a surprising one for CreditRiskMonitor subscribers.

Windstream recently battled Aurelius Capital Management LP in a debt-default trial. Aurelius claimed that Windstream breached covenants on its debt following a 2015 spin-off transaction, which created the industrial real estate investment trust now known as Uniti Group Inc. Windstream staunchly refuted that the spin-off qualified as a contract breach. The final judgement remains to be seen, which will determine whether this divestiture will merit a technical default for the company.

That considered, Windstream's financial condition remains fragile. During 2017, the company bought out industry competitors Earthlink and Broadview, which reflected a simple roll-up strategy. But by early 2018, executive management disclosed approximately $2.14 billion in cumulative charges related to goodwill impairment, higher depreciation & amortization, and additional merger and integration costs, all of which were primarily attributed to these two large acquisitions. The charges actually pushed shareholders’ equity into negative territory.

As of Q2 2018, Windstream's trailing 12-month net sales and EBITDA margins appear to be showing signs of stabilization. Steadiness in performance margins is important here given that the telecom's interest coverage ratio is barely trending above 2 times, calculated as EBITDA over interest expense. Meanwhile, it is worth noting that the company was able to successfully refinance all of its near-term maturities, but its cost of debt has materially increased. As of the second quarter, its run-rate interest expense rose to approximately 8.4%, an expensive rate given today's historically low interest rate environment. This rate is certainly something to keep an eye on going forward.

Although pushing out its maturities was a net positive, financial leverage remains a serious concern. For several quarters now, net debt has exceeded $10.5 billion and Windstream's debt-to-asset ratio just hit a record level of 98%. What’s most concerning is debt repayment capacity. In the last three fiscal years, Windstream management’s guidance for free cash flow has maxed out at $200 million. For 2018, they just revised their guidance down to an adjusted free cash flow figure of $145 million. This lower number is made worse when you consider that the telecom cut its capital budget by approximately 15% year-over-year based on mid-point guidance – a move that should have freed up extra cash.

Unfortunately, the heavy debt burden is a massive hurdle for the company and repayment will be challenging. Windstream will need to stay exceptionally disciplined on execution, specifically growing enterprise sales, mitigating legacy erosion, and sustaining tight cost controls. Since the telecom industry remains highly competitive, even incremental gains will not be easy. Moreover, future performance deterioration would weaken its financial leverage metrics and could eventually trip a debt covenant, leading to an alternative default scenario (assuming that it avoids a technical default in the court case noted above).

Windstream Holdings Inc. was able to refinance many of its debt maturities and reported decent results in August, but it is not close to being out of the woods. The company’s FRISK® score is signaling financial stress, and subscriber crowdsourcing specifically shows that risk professionals have been on high alert for nearly a year. Those concerns, meanwhile, haven't materially changed despite the recent steadying of financial results.