Roadrunner Transportation Systems, Inc., a large U.S. domestic trucking company, has been highlighted as a financial risk by CreditRiskMonitor’s proprietary subscriber crowdsourcing. CreditRiskMonitor is a leading web-based financial risk analysis and news service designed for credit, supply chain, and financial professionals. Subscribers include thousands of risk professionals from around the world, including employees from more than 35% of the Fortune 1000. Three core features of the service include:

Breaking down the Details

Roadrunner Transportation is now one of the largest trucking companies in the U.S. after acquiring more than 20 trucking businesses since 2011. However, major accounting errors were discovered in early 2017, which eventually turned out to be the result of executive officers and certain employees conspiring in accounting and securities fraud to inflate reported figures.

CreditRiskMonitor subscribers, astute risk professionals, quickly took notice of the damage. Subscriber crowdsourcing, a powerful type of alternative data, directly came into play with Roadrunner. Crowdsourcing is often indicative of high risk when many analysts perform careful research and analysis on our web-based service on a particular company. When such scenarios occur, that warning signal is incorporated into the company’s FRISK® score.

Our subscriber base exhibited the unique research patterns that signal concern starting in early 2018. This behavior came around the time that Roadrunner announced an accounting restatement covering nearly six fiscal years and was one of the core reasons for Roadrunner's FRISK® score falling to a worst possible score of "1." 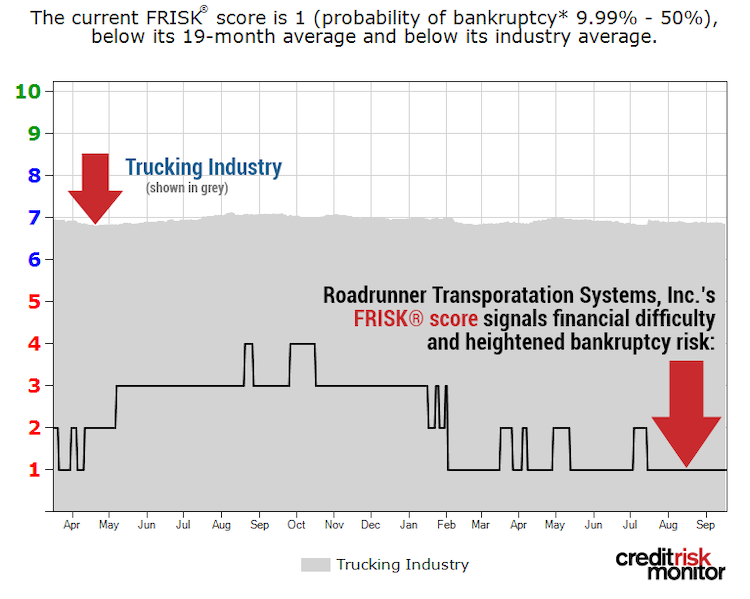 Roadrunner announced a major management team overhaul, the implementation of additional internal controls and an equity injection to support operations at the time of the restatement. These actions were meant to assuage investors and other interested parties, yet CreditRiskMonitor subscribers have continued to carefully evaluate the company’s financial reporting, as well as incremental news flow. This concerned behavior is in clear contrast to most other trucking companies. The explanation is straightforward: the trucking industry maintains an average FRISK® score of “7,” as revealed in grey in the chart above, which is quite healthy. This broadly mirrors the current boom cycle in the industry, where trucking companies are enjoying high freight rates.

However, Roadrunner Transportation remains deep in the FRISK® “red zone,” which is high-risk territory denoted by a FRISK® score range between “1” and “5.” See the bankruptcy risk chart below for details on the exponentially increasing financial risks posed by companies as they fall deeper into the red zone:

Since Roadrunner Transportation’s peak financial position in fiscal Q3 2015, the damage to the balance sheet has been severe. The company’s total shareholder equity position has declined by 92% from about $600 million to $47 million. This was driven by the restatement, as well as net losses following that event. A few key drivers were lower values recorded under goodwill, customer relationships and net property, plant and equipment. Pertaining to leverage, tangible net worth has dipped deeper and deeper into negative territory over the course of the last five years. Furthermore, debt relative to total assets has more than doubled over that span to a record 62%:

This dependence on leverage should be monitored closely given the company’s weak cash flow history. For example, over the last five years, annual free cash flow generation relative to sales revenue has been very low. More concerning right now, free cash flow was negative over the trailing 12-month period.

The recent cash flow weakness has primarily been driven by poor operating margins, which have been negative for seven consecutive quarters when excluding the divestiture of Unitrans. Obtaining the additional financing noted above was a mixed blessing. When the company received that supportive equity capital injection, the investor received an effective yield between 15% and 17% across all series of the preferred stock. Management classified the preferred as debt within its reporting. Regardless of what you call it, a 15%-plus yield is a notable burden. On Sept. 17, 2018, management stated within an 8-K that they will announce a plan to eliminate this costly financing: “...the Company currently expects to finalize and announce its current direction regarding its plans for such a transaction by the end of September 2018.”

Roadrunner Transportation's financial results would significantly improve if it manages to obtain cheaper financing. This is something that everyone should keep an eye on. Other risks should also be considered, as the company is still working through the amendments to its internal controls and has affirmed that not all remediation efforts have been completed. Additionally, there are a number of litigation proceedings against the company which were filed in 2017 and 2018. As of the second quarter, the company reserved for uninsured losses in the amount of $29.6 million, but also disclosed that all costs related to these legal matters cannot be currently estimated. So even if Roadrunner is successful in its efforts to lower its interest expense, it still has other issues to deal with.

Roadrunner Transportation holds a fleet of more than 800 trucks and 11 cargo jets, and generates more than $2 billion in annual sales. Many customers are dependent on the company’s services and widespread supply chain disruption could ensue in the event of bankruptcy. New management could very well turn the business around and, fortunately, has the help of a strong industry upcycle right now.

CreditRiskMonitor subscribers, however, continue to monitor its financial situation very closely for a reason. If the new financing transaction falls through, operating costs remain too high, or freight rates experience a steep downward spiral, the company would likely be headed for financial trouble. Based on its low FRISK® score today, we recommend that subscribers continue to monitor this situation closely.