Risk on the Rise in India

Asia’s third-largest economy, the Republic of India, is boasting healthy economic growth. In fact, recent reports state the country is on target to double the size of its economy by the year 2025. India represents a desirable market for credit and procurement professionals largely due to its low operating costs and a diverse selection of companies in hot industries, particularly ones in the technology sector. Additionally, India’s new insolvency regulations make the country an attractive landing spot within the business world; it is now easier to do business in Mumbai, Delhi, Chennai and Bangalore today than perhaps at any other point in history.

Reading Between the Lines

In spite of the positives, conducting business within India’s market should come with a healthy dose of hesitation if you are a credit or procurement professional. Although India has experienced unprecedented growth over the years, financial risk has also materially increased, which is signaled by the CreditRiskMonitor FRISK® Stress Index. Credit and procurement professionals should be on high alert, as the FRISK® Stress Index shows a staggering risk increase of 351% since the Great Recession: 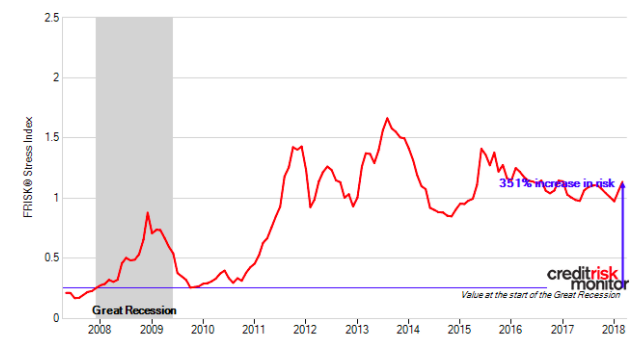 Out of more than 4,100 India-based public companies in CreditRiskMonitor’s database, more than 1,030 - or roughly one quarter of the companies - are in the FRISK® “red zone” of elevated bankruptcy risk. The FRISK® score is based on a “1” (worst) to “10” (best) scale, with score of “5” or lower being the red zone. We advise CreditRiskMonitor subscribers to pay strict attention to any public company which falls within that range.

Financially weak companies in India span many industries such as oil and gas, healthcare, technology and retail. Though growth sounds promising, many companies appear to be at risk of financial distress, and risk professionals would be well advised to look into why before bringing India companies into their portfolios. Below is just a sample of the companies that the FRISK® score highlights as posing potential risks to financial counterparties:

Some India-based companies, meanwhile, are in even worse shape. PSL Limited, for instance, filed for insolvency in July of 2017. Ricoh India Ltd. and Hanung Toys and Textiles Limited entered India's bankruptcy courts in January and March of this year, respectively. Although each of these situations is obviously unique, they are vivid evidence that financial risk in India cannot be ignored; the FRISK® scores of each of these companies were in the red zone before they filed.

A Dive Into the Numbers

Though Bilcare Limited has seen some positives recently, the pharmaceutical packaging company continues to post some worrisome numbers. Specifically, the company’s Altman Z”-score collapsed. Starting in March of 2016, the Z”-score fell into the “fiscal danger” category and has not recovered. Not only has the business reported persistent net losses over the last few years, but it has also shown an incremental step up in financial leverage. For example, their debt-to-assets percentage has risen from just over 50% previously to 65% in the third quarter of 2017.

Bilcare Limited has been in the FRISK® red zone since April of 2016, and the score dipped from a “5” to a “3” within the last eight months. As a result, financial risk is clearly elevated here.

Although this IT solutions company’s financial situation has been precarious for more than a year, things took a more drastic turn in September 2017 when the company’s CFO, S.G. Murali, announced his resignation. More recently, the company’s board sought shareholder approval to sell off assets, a request that was approved in February of this year.

Though the dispositions will likely bring temporary financial relief, a look at the company’s balance sheet illuminates money issues that will take much more time to fix. For example, tangible net worth dipped into negative territory in the September quarter and short-term debt makes up roughly 77% of the company's total debt. These facts suggest HCL Infosystems Limited, which has been bleeding red ink for over a year, has little wiggle room should conditions worsen.

The fact that India’s economy is growing is a positive at the macro level, but problems still persist in this country when you dig into public companies and find billions of dollars at risk. It is important for credit and procurement professionals to proactively research India’s overall financial health, in addition to the individual companies based there, before making any decisions on conducting business. Consistent monitoring, both at the country level and the company level, can make the difference in the amount of risk you might be adding to your portfolio. The FRISK® score offers a first line of defense, alerting you to counterparties that require a more scrutinous appraisal, saving you time and potential exposure.