The Argentinian economy has improved since the government's 2014 debt default, but the country is still facing severe challenges. Argentina is reporting unrelenting fiscal and current account deficits, high inflation, and a ballooning external debt load. The Argentine peso has collapsed since it was allowed to float freely in December 2015, which demonstrates just how much financial trouble remains in this South American nation. When compared to the U.S. dollar, the currency has fallen a staggering 40% in the last 12 months alone.

Another concerning dynamic is the newly implemented interest rate policy by the Central Bank of Argentina (BCRA). The 35-day Lebac rate, the BCRA’s benchmark interest rate, was recently pushed up to 40% and is now the highest in the world. It’s hoped that this rate hike will benefit the economy, in part by subduing inflation. However, it’s already having knock-on effects, including crimping credit growth and inverting Argentina's yield curve even further. In fact, Argentina just received a massive $50 billion loan agreement from the International Monetary Fund (IMF) to help its budget spend, and the government must comply with its proposed austerity cuts.

Commercial suppliers and buyers must take extra care when dealing with emerging market businesses, particularly ones in Argentina. The CreditRiskMonitor worldwide subscription offers our users the ability to proactively monitor counterparty financial risk in Argentina and many other countries outside of North America. Our credit report coverage spans more than 58,000 public companies around the world. Thousands of risk management professionals utilize the FRISK® score, which identifies financial stress and failure risk up to a 96% rate of accuracy.

For South America, CreditRiskMonitor's reporting coverage exceeds 2,000 publicly traded companies. Many of these businesses fall into what is called the FRISK® "red zone."  This is the bottom half of the “10” (lowest risk) to “1” (highest risk) FRISK® scale, and it is an important warning signal. The red zone is shown in the visual below:

This range effectively identifies when a business is in financial distress and possesses a higher-than-average risk of failure. What's most concerning is that nearly half of all scored companies specifically in Argentina currently stand in the high-risk category.

Financial risk is spread across Argentina's business landscape and some industries have been harder hit than others. Companies in agriculture, for example, have been struggling through a prolonged period of weak commodity prices. Agriculture is only one industry dealing with major problems though. Risk professionals should pay special attention to business counterparties with high financial leverage. In the table below are a variety of large corporations based in Argentina with weak capital structures:

Here, we handpicked companies from different industries, all of which have FRISK® scores in the high-risk red zone. Each company's Z''-Score (a rating system developed by Dr. Edward Altman that gauges a company’s likelihood of bankruptcy) is also shown, which is another helpful indicator in measuring financial stress. Furthermore, we've included the most recent quarter debt-to-asset ratio for each company. While financial leverage varies from industry to industry, all of these companies are showing higher-than-average debt levels.

Argentinian companies that have issued domestic debt are exposed to high interest rates, whereas debt denominated outside of Argentina is exposed to volatility in the foreign exchange market. As we previously mentioned, borrowing rates in Argentina are expensive and the peso has fallen about 40% year-over-year. All else equal, if U.S. rates and the dollar were to rise at the same rate, it would be more difficult for an Argentina-based company to repay U.S. dollar denominated debt. If you have a counterparty that is in financial trouble now, these macroeconomic risks could introduce more problems to that company’s poor financial situation.

Trouble in the Pipeline?

Medanito SA maintains a variety of operations in the energy sector, largely involving exploration, production, and transportation of oil and gas. Currently, its FRISK® score stands at a "2," which is well below the industry average of "6." 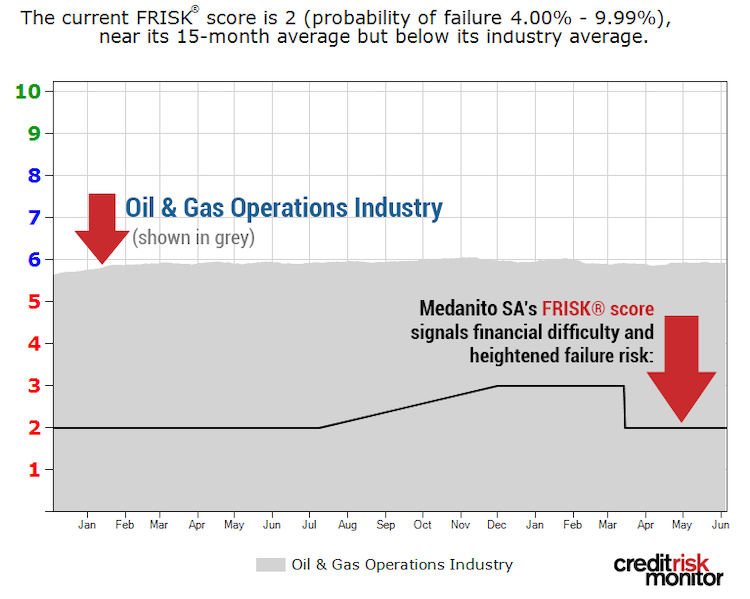 Between fiscal 2016 and 2017, this business reported material declines in all four components of its Z''-Score. TTM EBIT-to-total assets and total equity-to-total liabilities are two metrics that both turned negative primarily as a result of the company's higher year-over-year operating expenses. During fiscal 2017, the company reported its largest net loss over the last fiscal five years and paid about an 11% interest rate on its debt. Free cash flow also turned negative, despite a significant reduction in capital expenditures.

Shifting to the balance sheet, Medanito's working capital deficit widened significantly mostly due to lower cash and accounts receivable as well as higher short-term debt balances. Additionally, the energy company recorded a steep increase in financial leverage as its debt-to-assets rose from 55% to 67% on a year-over-year basis. Given these factors, this oil and gas operator is one of the weakest among the seven companies previously shown in our table.

Argentina is using extraordinary measures to keep its economy afloat. While these tactics may help the overall environment for now, many businesses are feeling the pinch of IMF austerity in addition to other challenges, including the declining peso. Businesses that are heavily reliant on debt financing, particularly the seven entities mentioned above, could be in trouble if these overarching problems persist. Financial professionals, including credit and procurement, can monitor these types of risky companies using the worldwide subscription of the CreditRiskMonitor service. The highly accurate FRISK® score is the best resource available to identify and closely track public company financial risk.