Remington Outdoor Company, Inc. recently filed for Chapter 11 bankruptcy protection after more than 200 years of operation. The primary drivers of its collapse included broader industry weakness and its own unique financial challenges. This firearms manufacturer is now a problem for creditors, reporting more than $1.3 billion in liabilities compared to assets of only $954 million at the end of its most recent quarter ended Oct. 1, 2017.

CreditRiskMonitor sourced and processed this large private company's financial statements in-house. Our analysis determined that Remington had been a significant financial risk, as it has displayed the worst FRISK® score of "1" for more than a year. The FRISK® score is one of CreditRiskMonitor's proprietary credit models which accurately measure company financial distress up to and including bankruptcy.

How Financial Statement Sourcing Fits In

This service provides rapid processing of financial statements and primarily helps to reduce the challenges associated with data preparation and analysis of private companies. It’s essential that financial professionals not only receive comprehensive company coverage but also highly accurate risk assessments. Here, credit professionals can tap into the precision of the FRISK® score through Financial Statement Sourcing. When the model unveils a worrisome financial relationship, these cases can be addressed promptly.

With that said, we will review some developments in the firearms industry and key factors that contributed to Remington’s bankruptcy.

Firearm industry sellers have been under more pressure recently. For example, retail chain Gander Mountain Company, which claimed to be the top seller of new and used firearms in the U.S., filed for bankruptcy in March of 2017. According to CEO Marcus Lemonis, two key drivers for its bankruptcy were a weak gun product mix and poor inventory management.  Since then, new management has restructured and rebranded the company, and its name was also changed to Gander Outdoors.

Manufacturers have also reported sales weakness, particularly in the last two quarters. American Outdoor Brands Corporation, formerly Smith & Wesson, reported a 33% year-over-year decline in sales during the third quarter. Sturm Ruger & Company, Inc. displayed a similar decrease in its fourth quarter sales, with its top line declining 27% year-over-year. In essence, we are noticing less commercial purchasing activity in Remington's core industry. Making matters worse, however, major retailers including Wal-Mart, Kroger and Dick's Sporting Goods have recently announced that they are curtailing firearm offerings at their stores, primarily as a result of the negative media coverage surrounding the industry. Putting it all together, we can see pressure manifesting in both firearms manufacturing and related retail outlets.

Fortunately, our subscribers have been aware of Remington's weak financial state for some time, since its FRISK® score has been a bottom-rung “1.” A score of "1" is highly concerning given it represents a 10% - 50% probability of bankruptcy over the next 12-month period: 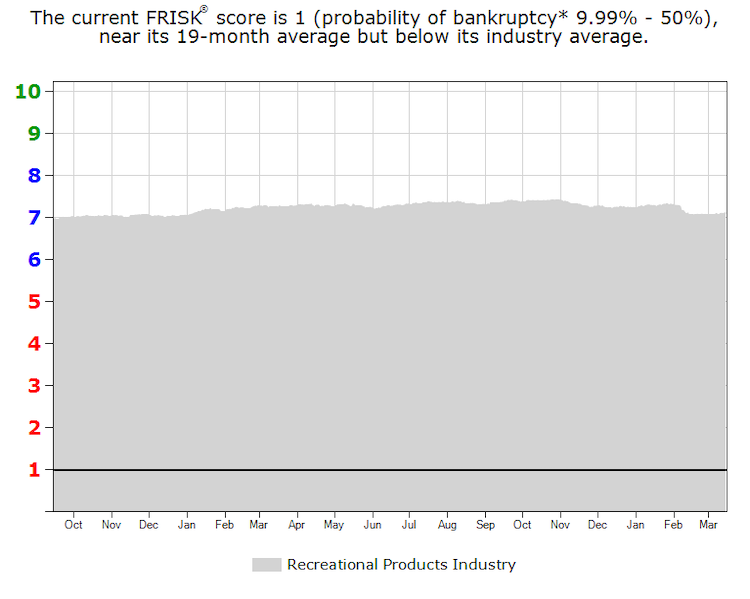 While firearm manufacturers have typically generated strong margins and healthy credit profiles, Remington has been facing increasing troubles for some time. Over the last four years, the gunmaker's gross margins have experienced a severe decline. Gross margins averaged north of 30% a few years back but fell to a lackluster 21% in the trailing 12-month period, well below the present-day recreational product industry median of 30%.

Industry instability, in addition to the unique troubles for this marginal operator, led to a collapse in revenues as well. When reviewing its interim efficiency metrics, we saw collapsing annualized inventory turnover, and more broadly, a protracting cash conversion cycle: 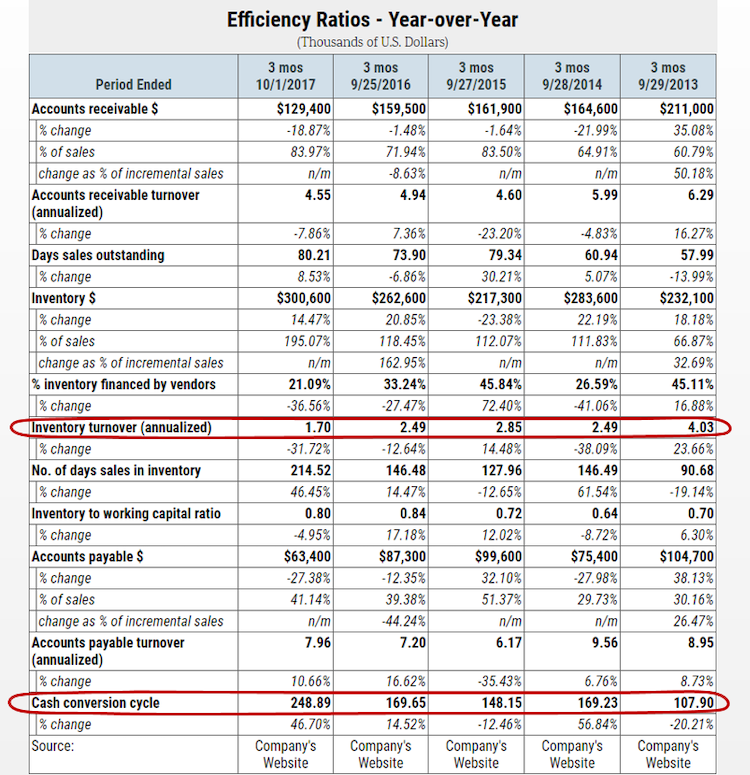 Remington also carried a substantial debt burden, showing a total debt load exceeding $950 million in the latest quarter ended Oct. 1, 2017. In and of itself, however, that figure doesn't mean much. It's when you examine the balance sheet more deeply that the real risk shows up. For example, we can best observe its deteriorating credit profile through year-over-year interim leverage ratios. The company displayed increasingly negative tangible net worth and a climbing debt to assets ratio: 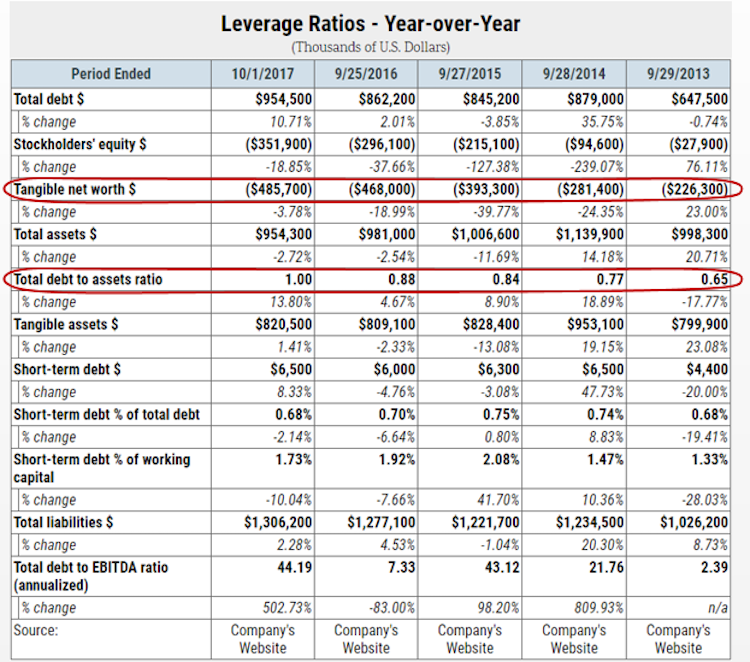 Remington's challenges blew up in the last 12 months, as net sales declined across every sequential period. This sales weakness outpaced its cost-cutting efforts and contributed to its persistently negative free cash flow. These trends ultimately impaired the gunmaker's ability to service its debt load.

Just like Gander Outdoors' 2017 bankruptcy, Remington has experienced significant financial pressure related to gun inventories and sales. Remington operates in an industry that is facing substantial stress, which in the end, proved too much for the heavily indebted company to bear. It's FRISK® score and financial statements uncovered its deterioration, largely illustrated through weak performance metrics and a high degree of leverage. This is another instance where certain business counterparties may take a hit due to a bankruptcy restructuring process.

This scenario also supports the need for extensive company coverage with financial statements, for private businesses as well as publicly listed firms, even when the brand name is well-known. Financial professionals can easily add such coverage to their arsenal through the CreditRiskMonitor service.