Prepare Now Before the Cycle Turns

Economic consensus points to steady global growth for the foreseeable future. However, the longevity of the current benign credit cycle should be viewed with skepticism as incremental risks continue to build up. Of course, trade war risk should rightfully be a concern for many industries and countries around the world. Yet simultaneously, the enormous expansion of credit exists as one of the largest underlying risks to the economy. While predicting the precise timing of the cycle is a challenge, history indicates that widespread trouble is not far away.

All risk management groups, particularly credit and supply chain professionals, need to prepare for a downturn today or will almost certainly struggle playing catch-up tomorrow. It’s critical that your company’s most important counterparties should be scrutinized during this time of uncertainty. The CreditRiskMonitor service is the best option to help with this challenging process of risk mitigation.

A Record Amount of Junk Debt

While interest rates are still low by historical standards, they are rising in the U.S., which has led to tighter credit conditions for the largest geographic economy. Companies of all types, quite logically, have taken advantage of the opportunity to secure cheap debt and extend corporate maturities. For example, technology giants like Apple Inc. (Nasdaq: AAPL), Oracle Corporation, (NYSE: ORCL) and Microsoft Corporation (Nasdaq: MSFT) have managed to access funds with relative ease; their solid business structures and strong balance sheets serving as evidential proof. Yet not all companies issuing or recycling debt are as financially secure.

Take, for example, junk-rated Frontier Communications Corporation (Nasdaq: FTR). Debt at this telecom provider has ballooned in support of acquisitions, cumulatively issuing $7.48 billion in new debt during the course of the last three years. In spite of this, its earnings have declined over the same time frame. Thus far, yield-starved investors have been willing to buy debt of financially weak companies, like Frontier, in an attempt to increase returns. That's not an unreasonable decision if the rewards are high enough. At the same time, however, bond covenants across the aggregate have loosened up. Covenant-lite lending has allowed corporations to pursue riskier business strategies, such as spending more aggressively and buying out other companies. While this may seem like business as usual, commercial suppliers and buyers can be subject to a host of problems when these strategies fail.

With junk rated companies in mind, it’s important to consider the broader trend. Last year, Dr. Edward Altman and CreditRiskMonitor CEO Jerry Flum discussed ballooning risk manifesting in credit markets in a webinar: The Mammoth Debt Problem. In the United States, junk debt was mentioned as a particularly concerning issue, as it had reached approximately $2.5 trillion when including leveraged loans. That's a staggering 13% of the U.S.’s gross domestic product (GDP): 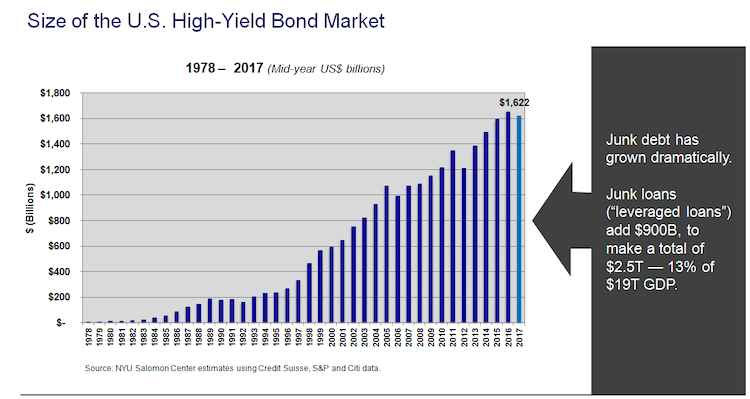 That increase has coincided with non-financial Corporate Debt (NFCD) to GDP jumping to 45%: 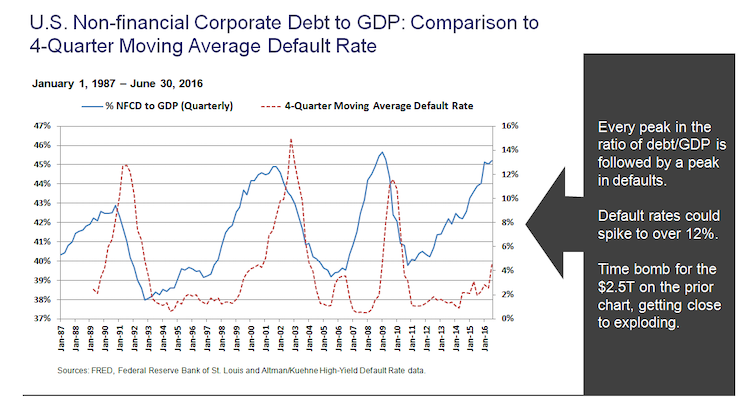 In each of the last three debt cycles, default rates have spiked every time the ratio of NFCD to GDP rose to these levels. Within these scenarios, companies that are most at risk of default are the junk issuers. What’s worse is that the high yield bond market only continued to expand since this webinar was conducted in September of 2017.

The good news is that there's a lag between these two trend-lines. Currently, default rates remain at relatively low levels. The concern is that it may not take much to drive default rates higher, assuming credit conditions continue to tighten and the economy falters. Again, now is a critical time to adopt best practices in risk management to protect your company.

During 2017, Frontier’s FRISK® score dropped to the lowest level of “1.” The FRISK® score is a proprietary credit model that predicts financial distress and bankruptcy risk, ranking companies from "1" (highest risk) to “10” (lowest risk). In fact, 96% of all U.S. public companies that declare bankruptcy fall into the lowest five scores, which we call the "red zone." The fact that Frontier's FRISK® score is a “1” provides an important warning sign to customers and suppliers that material financial risk exists.

One of the important themes of the FRISK® score is that it doesn't consider payment history, but instead it focuses on four data components including: stock market sentiment, credit agency ratings, financial statement ratios, and crowdsourced research behavior. CreditRiskMonitor's subscriber base is the driver of crowdsourcing, which includes 35% of the Fortune 1000 and many other large companies from around the world. Payment history is useful for measuring risk in private companies, and even smaller public companies; however, CreditRiskMonitor research indicates that public companies have a long history of making timely payments right up until the day they declare bankruptcy. Therefore, relying on payment history for public companies won't keep you ahead of the curve.

In and of itself, the FRISK® score for a single company is valuable information. Microsoft, for example, has had a FRISK® score of "10" (the best possible score) for the past year. If your company counted Frontier and Microsoft as two customers and/or suppliers, the bigger risk would be Frontier. Naturally, every situation isn't as cut and dried as the aforementioned.

The service becomes even more valuable when you examine FRISK® scores across your entire portfolio of relationships. When you have a portfolio of businesses, the FRISK® score will quickly cull out the biggest risks. After that, you can use many different tools within the CreditRiskMonitor service to evaluate risk more precisely. The robust database allows you to examine historical financial statements through trend analysis as well as relative comparisons to industry peers. There's also a news feed that displays the most pertinent corporate events that are impacting each individual business.

The last time that there was a major increase in NFCD to GDP, the 2008 Great Recession ensued a few quarters later, and we observed a substantial increase in default rates. Here we can see that current debt levels, much of it low quality, will eventually become a problem. Keeping public company financial risk at bay is more important than ever, and now is the time to start preparing. For credit professionals, it’s essential to easily drill down to examine your biggest dollars at risk. For procurement, financially weak businesses must be identified as these risks could lead to supply chain disruption.

The FRISK® score is updated daily and looks to identify trouble in the upcoming 12-month period. All it takes is a quick review of your company’s portfolio to show which entities are the biggest risks, those that are becoming more risky, and which ones only need a cursory check. We believe the CreditRiskMonitor service, along with the proprietary FRISK® score, can help you in that effort.