CreditRiskMonitor is a leading web-based financial risk analysis and news service designed for credit, procurement, supply chain, and financial professionals. Subscribers include thousands of risk professionals all over the globe, including key decision makers from approximately 40% of the Fortune 1000. Three features of the CreditRiskMonitor service include:

The FRISK® score uses a scale that ranges from “1” (riskiest)-to-“10” (least risky). Hornbeck Offshore's FRISK® score is currently trending at the lowest-possible FRISK® score of “1.” 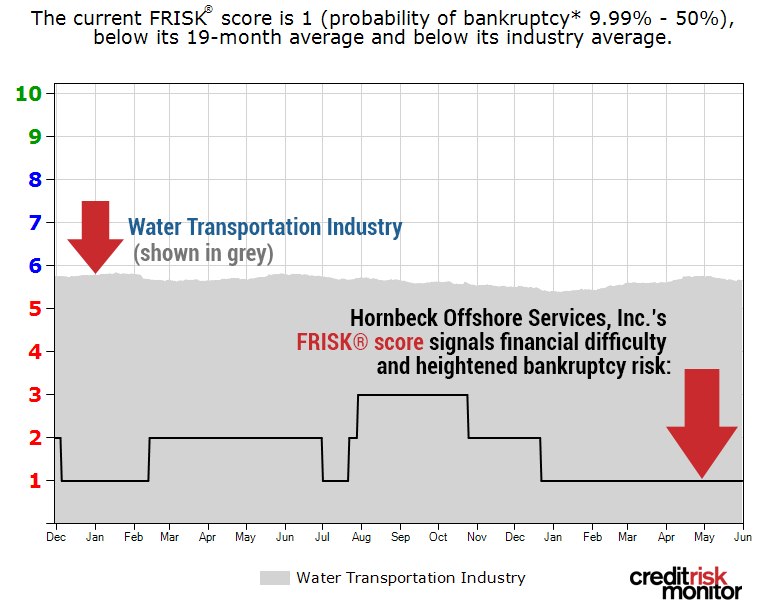 Unlike the FRISK® score, the Z”-Score continues to miss the risk here. Over the last few quarters, the Z”-Score demonstrates “neutral” financial health despite Hornbeck Offshore’s unsustainable capital structure detailed below.

Hornbeck Offshore's operating performance remains weak, in trend with three years of depressed offshore oil & gas rig activity reflected in the average day rates and total contracted utilization data reported by IHS Markit®. While management expects a modest inflection in supply and demand this year, the prospect of a significant recovery in offshore drilling still appears to be about two years away.

In April, Moody’s Investors Service stated that Hornbeck Offshore’s “refinancing risk remains elevated in the absence of a meaningful recovery in the offshore drilling market.” For context, the company held about $175 million in cash and short-term investments as of Q1 2019; however, its term loans contain a $25 million maintenance covenant, so true cash is around $150 million. Meanwhile, its trailing 12-month free cash flow deficit was more than $100 million, not leaving much flexibility.

The larger problem is the maturity of its 2020 senior debt which the company has been exchanging for a higher-yielding, longer maturity bond. However, in the Q4 2018 conference call, management stated that a portion of debtholders may attempt to force the company into bankruptcy: “we believe that there is a fraction among them who's [sic] objective is not to be repaid but rather to coerce the company into a highly dilutive restructuring.”

So far, the debt exchange has allowed management to reduce the face value of its 2020 5.875% senior note by $142.6 million, refinanced into a new 2025 term loan bearing 9.5% interest. The remaining $224.3 million of 2020 notes still need to be negotiated, resulting in every higher cash interest burdens.

Altogether, management is working hard to avoid a restructuring but the company’s net debt hit a record high of $1.02 billion last quarter. Unless both offshore activity and day rates demonstrate a meaningful upswing over the next year, its refinancing transactions will continue to be challenging and bankruptcy could become a reality.

A broader market recovery will be required for Hornbeck Offshore to avoid Weatherford's fate, and the near term outlook remains bleak.