Not So Noble With Failure Looming

Multi-billion dollar commodity trader Noble Group Limited (SGX: CGP) is holding on by a thread as it has lost credibility with investors and lenders. Price weakness across coal, iron ore, crude oil and natural gas over the last few years is the primary reason for its business challenges. However, financial restatements followed by management departures have been even more telling, highlighting serious governance issues. Based on the size of this operator, many counterparties would be impacted by a looming corporate failure.

Noble Group’s FRISK® score has bottomed out to the lowest rating of “1,” meaning that the company now has a 10-to-50% chance of declaring bankruptcy over the next 12 months. CreditRiskMonitor's proprietary FRISK® score is a bankruptcy risk scoring system where a "1” is the worst possible score and “10” is the best in terms of a company's financial health. Any business with a score equal to or less than “5" falls into the high-risk “red zone,” which serves as an initial warning sign for subscribers.

Further, subscribers can gauge Noble Group against industry peers using the FRISK® Stress Index; a complementary FRISK® score solution that monitors aggregate financial risk pertaining to an industry, region or portfolio of companies. As an example, the FRISK® Stress Index for Hong Kong, where Noble is incorporated, reveals that 341 companies out of the 1,328 that have a FRISK® score fall into this worrisome red zone territory.

Noble Group's FRISK® score began to indicate serious underlying financial stress in the beginning of 2016, when its score dropped from a “5” to a “3.” This warning sign effectively alerted subscribers to follow the company more closely and implement procedures to reduce exposure, if required. Given Noble Group’s FRISK® score is now at the worst ranking of “1,” financial counterparties must be very careful with this company.

Based on the MD&A released in November 2017, Noble Group reported a double-digit decline in year-over-year tonnage volumes. One of the key factors driving this negative performance was constrained trade finance lines. In the sequential quarterly balance sheet presentation provided by CreditRiskMonitor’s service, subscribers can observe directional declines in vendor-supplied liquidity over the course of the last three years. One factor that drove this decline was the classification of the Global Oil Liquids and North American Gas & Power business segments as discontinued operations. However, if you look at accounts payable as a percentage of continuing net assets, the decline in vendor financing becomes clearer: this metric fell from 23.2% at 9/30/2015 to 18.4% at 9/30/2016 to 9.6% at 9/30/2017.

In light of massive net losses and shrinking vendor supplied financing, the company appears to be running out of options. Specifically, the company's short-term debt exceeded cash by a ratio of approximately 4.6 times as of 9/30/2017. That is one of the factors that led Fitch Ratings to downgrade all of the company's unsecured notes from "CCC" to "CC." In its recent credit evaluation, also available to CreditRiskMonitor subscribers, Fitch provided a dour outlook, stating that: "a default of some kind appears probable."

Most importantly, we think this is a textbook case where trade creditors should not rely on payment history as an indication of public company financial health. Based on empirical evidence, the capacity or timing of inventory payments by large publicly traded companies often does not reflect the health of the business.

Below is Noble’s DBT Index, a measure of the company's payment behavior, which reflects a strong payment history standing at a high range of “9” and “10”: 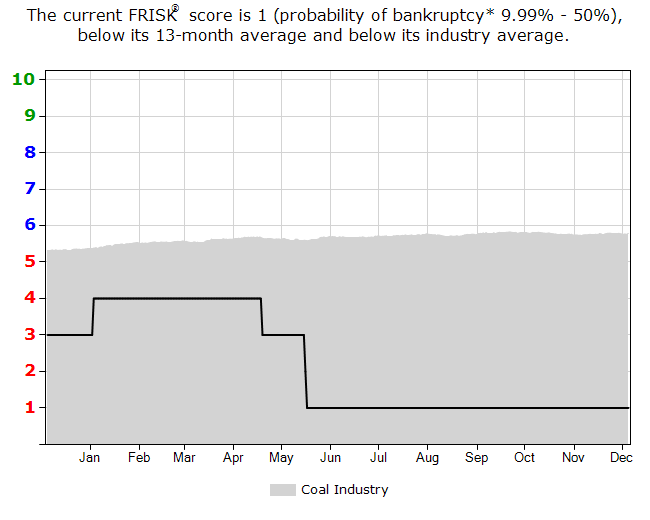 Yet this is in near-diametric opposition with Noble Group’s FRISK® score, as well as its weak credit ratings. Hypothetically speaking, the company may be paying all vendors on time right now but within a short-time span it may have difficulty coming up with the necessary cash to meet obligations. In this case, payment history trends actually provide a short-sighted viewpoint on the company’s poor financial condition.

The proprietary FRISK® score is painting a troubling picture for Noble Group. While the company is currently paying its vendors on time, a financial restructuring could bring the dollar flow of trade credit to a grinding halt. It appears that some suppliers have already taken action over the last two years to reduce exposure. During this time period, Noble’s debt as a percentage of total assets also increased substantially. This increase – and the company’s ability to meet its repayment commitments – is why Fitch downgraded the company’s credit rating. Simply put: proper risk mitigation strategies should be put in place if they haven’t been already.

It’s also important to remember that this is not an isolated case. Risk managers in both credit and procurement can identify high-risk businesses like Noble Group using the global coverage offered by the CreditRiskMonitor service.