Increasing Risk in the Australian Economy

For the past several years, Australia’s economy has enjoyed growth and stability. However, key economic markers such as a stagnating real estate industry and stalling retail markets indicate definitive signs of trouble “Down Under.”

According to a Grant’s Interest Rate Observer report published in November: “While Australia hasn’t seen a recession since 1991 (the longest such streak in recorded history), year-on-year GDP growth of 1.7% and 1.8% in the first and second quarter[s] marks the narrowest six-month pace of expansion in 20 years, apart from the 2000-01 and 2008-09 periods.”

Like several regions around the globe, Australia’s retail industry growth has appreciably slowed. Though it’s not seeing as much disruption as the United States experienced this year, Grant’s reports that the year-on-year retail sales gains in Oz were the lowest they’ve been since 2013. Likewise, the housing market has also lagged when compared to recent years, due in part to new regulations governing interest-only mortgages. The country’s reliance on its largest trading partner, China - whose economy is showing signs of decline after years of fast-paced growth - is yet another obstacle with which Australia is dealing. 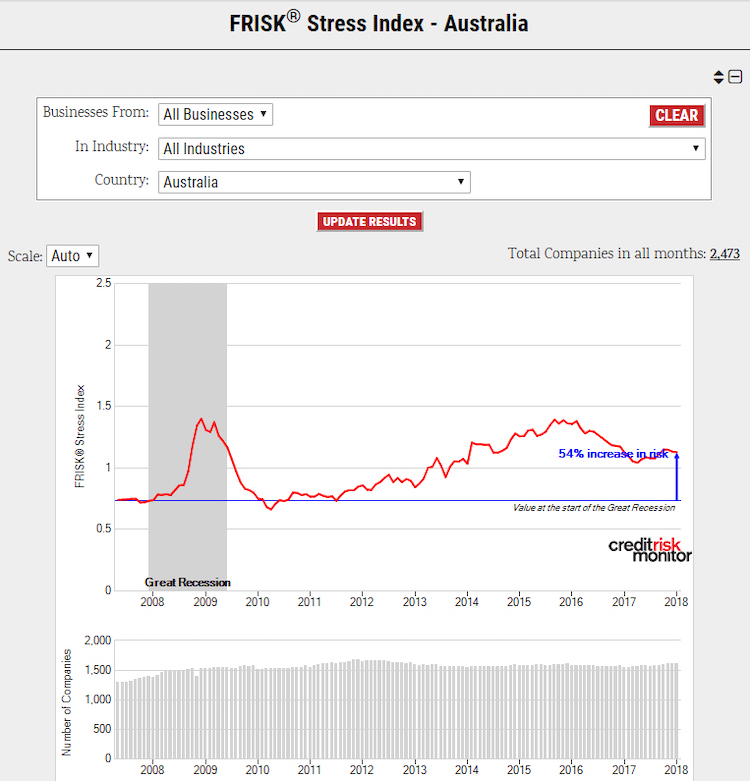 A Closer Look at the Retail Plummet

Australians are laden with debt, which consequently means less spending in the retail sector. In fact at the end of 2016, consumers’ debt-to-income ratio was 188%. Retailers exhibiting financial stress include popular surfwear company Billabong International Limited, with a FRISK® score of “1” and Specialty Fashion Group Ltd., which currently sits at a FRISK® score of “2.”

CreditRiskMonitor’s proprietary FRISK® score was developed to most accurately predict financial distress in public companies. It ranges from “10,” the best possible score, to “1,” the worst score. CreditRiskMonitor suggests that financial counterparties closely monitor companies once their FRISK® scores fall to “5” or below, which puts them in the high-risk "red zone." The strength of the score owes much to a crowdsourcing effect created by credit managers who use the CreditRiskMonitor service.

Obtaining financial insight, prior to actual disclosure, on a publicly-traded company has always been difficult given restrictions devised to prevent insider trading. Such financial inquiry restrictions, however, do not apply to credit managers, whose job is to assess a company’s financial health, whether or not the company is public or private. Simply put, credit managers may legally acquire this sensitive information and act in the best interest of their company. This is an extremely important way to understand how financially healthy a company is as a counterparty or investment.

Leveraging sentiments among credit managers to enable a powerful predictive element strengthens the FRISK® score, which is 96% accurate in predicting public company bankruptcy risk within a 12-month period.

Thus, if Billabong and Specialty Fashion Group are in your portfolio, poor FRISK® scores indicate that you ought to watch these Aussie companies closely.

The problems for Australian retail, however, are larger than just two companies. Marking the largest retrenchment since 2010, summer sales figures slumped by 0.6% in July/August 2017. This appears to confirm the Reserve Bank of Australia's fears that rising housing-related debt would prevent consumers from putting their money back into the economy in other areas. It would be a good idea to review all of the Australian retailers in your portfolio today.

Though Australia’s housing market hit bubble territory and enjoyed much price growth, economists have long been skeptical of its ability to maintain such a rapid ascent. To ward off a swift decline, the Reserve Bank of Australia has kept record-low interest rates of 1.5% in place since August of 2016.

This June, housing prices increased to an average of 669,700 Australian dollars - or approximately $532,000 USD - a year-over-year increase of 10%. The problem is that this increase is four-to-five times higher than wage increases, according to David Reid of CNBC, making it unsustainable for the country’s population in the long term.

Economists appear to have been proven right, as the current housing market has begun to slow. The housing market is expected to remain weak because of a combination of saturation and lack of affordability. This could lead to increasing strains for Australian residential builder Simonds Group Ltd. The company has seen its long-term debt load increase and has a negative tangible net worth. In 2017, Simonds' FRISK® score has shifted between a “4” and a “2,” anchoring itself firmly within the dangerous red zone.

Australia’s relationship with China is also a cause for concern, as some of its largest industries - notably mining - are heavily reliant upon Chinese customers. China’s economy continues to show strong signs of financial stress, and S&P has recently cut the country’s credit rating. Thus, there's a looming risk that conditions will only worsen for Australia’s economy as well, should the slowing trend in China continue. A significant number of Australian miners fall into the FRISK® red zone, including Pan Asia Corp Ltd., Crater Gold Mining Ltd. and Resource Base Limited, with all three companies at a FRISK® score of “1.”

With the Australian and Chinese populations currently saddled with growing debt, economic stagnation by way of a decline in retail and a sluggish housing market are all factors contributing to corporate financial strain for Australia. If credit and procurement professionals once thought Australia’s financial status wasn't something to worry about, their approach should change before losses become imminent.

CreditRiskMonitor's FRISK® Stress Index for Australia is sending a clear warning that now is the time to implement loss mitigation strategies. That includes diving deep into the Australian businesses that could be most at risk, indicated by low FRISK® scores names. CreditRiskMonitor currently monitors over 2,400 Australian companies across many industries -- 20% of which fall into the red zone.

CreditRiskMonitor is a financial news and analysis service designed to help professionals stay ahead of public company risk quickly, accurately and cost-effectively. More than 35% of the Fortune 1000, plus thousands more worldwide, rely on our commercial credit reporting and predictive risk analytics for assessing the financial stability of more than 56,000 global public companies.

At the core of CreditRiskMonitor’s service is its 96%-accurate FRISK® score, which is formulated to predict public company bankruptcy risk. One of four key components calculated in the FRISK® score is crowdsourced subscriber activity. This unique system tracks subscribers' patterns of research activity, capturing and aggregating the real-time concerns of what are essentially the key gatekeepers of corporate credit. Other features of CreditRiskMonitor’s service include timely news alerts, the Altman Z”-Score, agency ratings, financial ratios and trends. CreditRiskMonitor’s network of trade contributors provides more than $150 billion in trade data on their counterparties every month, giving them visibility into their biggest dollar risks.