Residential homebuilders are in the midst of a recovery. Housing starts in 2018 are clocking around 1.3 million annually, up significantly from six hundred thousand units following the subprime mortgage crisis. Nearly two decades of public company bankruptcy risk analysis tells us, however, that not every company within an industry should be painted with the same brush. Certain residential homebuilders are performing adequately, like PulteGroup, Inc., while others like Hovnanian Enterprises, Inc. remain severely exposed to credit risk.

CreditRiskMonitor is a leading web-based financial risk analysis and news service designed for credit, supply chain and financial professionals. Subscribers include thousands of risk professionals all over the globe, including employees from more than 35% of the Fortune 1000. A few of CreditRiskMonitor's most important features are:

With tight housing inventories and steady consumer demand, U.S. homebuilders have aggressively pursued unit growth and price increases. These builders heavily utilize their balance sheets to acquire land, develop it and build out their communities. This business model naturally involves, tying up a significant amount of capital. Upcycles are phenomenal for businesses, yet economic downturns can result in severe balance sheet risk.

With the U.S. economy performing well in 2018, the Federal Reserve has increased benchmark interest rates from virtually zero to 2.25% over the course of the last three years. Tightening credit has a ripple effect that spills directly into housing. As of October 2018, the 30-year fixed mortgage rate has pushed up to 5%, the highest level realized since early 2011. This rate will be impacting purchasing demand, especially if rates continue to rise. Simultaneously, short-term borrowing rates in the U.S. have become more expensive for homebuilders. Higher rates have a two-fold negative impact on earnings and cash flow for homebuilders.

From a competitive standpoint, prefabricated modular houses are on the rise once again. Businesses may find this avenue more attractive from a cost perspective, particularly by reducing labor. In September, Amazon announced capital funding for a homebuilder, Plant Prefab, which intends to design its homes for smart devices. Prefabrication operators could place pressure on traditional homebuilders over time.

The Good and the Bad

Pulte is one of the financially healthier homebuilders in the U.S. It currently maintains a FRISK® score of “7,” which stands above the current construction services industry average in 2018: 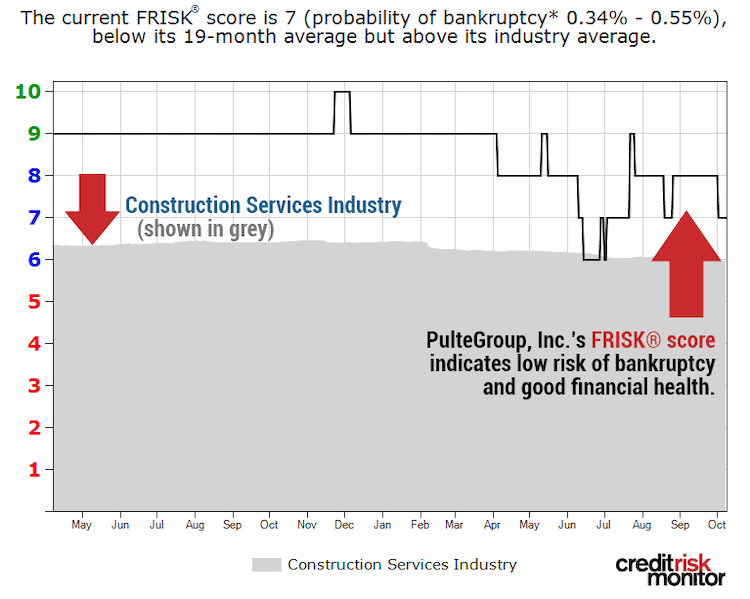 This measurement indicates a small probability of bankruptcy and limited financial risk. Pulte has vastly expanded inventories regarding both land and housing under construction. On a trailing 12-month basis, annualized net sales are up double digits and operating margins have returned to near-peak levels. Pulte has also realized an uptick in annualized cash flow from incrementally higher earnings and a relative increase in deferred income tax.

While ramping up to meet increasing demand, net leverage (comparing debt-to-annualized EBITDA) stands around two times on a trailing 12-month basis. This suggests that management has ample flexibility to handle softness in housing if it were to develop more broadly. As a general guideline, if a counterparty has a FRISK® score in the range of “6” to “10,” the company can often be assigned a pass in terms of financial risk. This quick look at some of Pulte's key financial metrics bears this out.

Conversely, Hovnanian has very limited flexibility. It currently maintains a FRISK® score of “1,” which is the worst risk category in terms of financial health and well below the industry average. A FRISK® score this low warrants close and immediate attention: 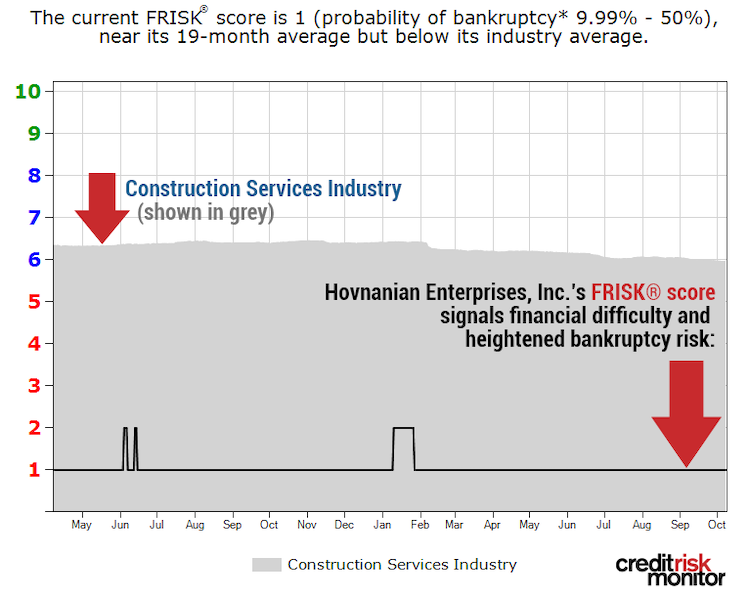 Hovnanian was involved in a voluntary default earlier this year, but appears to have reached a resolution with financial counterparties. This type of information is provided through CreditRiskMonitor’s timely news service that helps counterparties stay ahead of trouble.

Despite achieving the default resolution, however, the company’s creditworthiness still remains a risk. Due to underinvestment in its communities, net sales has fallen to its lowest level since fiscal 2014 on a trailing 12-month basis. According to disclosures, homebuilding revenue has declined significantly in every region except for the Midwest. The company has also stopped development on certain communities, recording impairment charges of $186.1 million in prior periods, with those communities now holding a net book value of just $24.5 million as of July 31, 2018. This is particularly worrisome, suggesting that poor investment decisions are starting to take a material toll on the business.

Regarding financial position, debt-to-EBITDA stands at approximately 13 times. That ranks in the bottom quartile of housing industry peers and highlights Hovnanian's highly levered balance sheet. Given its weak performance – and limited cash flow – the company will likely be required to refinance its debt maturities since it won't be able to repay them. As such, the homebuilder is materially exposed to interest rate risk. And it already has a weighted average cost of debt close to 9%. With persistent underperformance, its constraining debt load appears likely to become an even more significant issue for the company.

Risk professionals should monitor all of their financial counterparties, including publicly traded companies. Residential housing has been in the midst of a decent business recovery so far, but higher interest rates may impact mortgage loan origination and certainly increase cost of capital for homebuilders. Rising competition is another factor to consider as well.

Currently, some operators have limited credit risk while others are severely exposed – Pulte and Hovnanian being prime examples of the two extremes. The key takeaway, however, is that even in strong and recovering industries, you need to carefully evaluate your exposures, a process that CreditRiskMonitor's proprietary FRISK® score and global coverage of 58,000 public companies makes as easy as counting from "1" to "10."