A relatively newfound subscriber crowdsourcing enhancement to CreditRiskMonitor’s proprietary FRISK® score has delivered a significant improvement to bankruptcy prediction. When credit and supply chain risk evaluators using our service grow increasingly concerned about a company and review the reports in greater depth, we pick up that behavior in their anonymous click patterns. The concerns of company clients, well-educated in finance, markets, and debt, quite literally serve as the model’s input. This group predominantly includes risk professionals like credit managers, acting as the gatekeepers of vendor financing and, thereby, corporate working capital. We have discovered that as a company becomes riskier, the click patterns change. It makes sense that these risk evaluators would investigate risky companies differently by examining more and more detailed information from news to financial spreads.

CreditRiskMonitor’s clients include over 35% of the Fortune 1000 plus thousands of other large companies worldwide. With over 20 years of usage data on the research patterns of these sophisticated operators, CreditRiskMonitor has demonstrated that the aggregate sentiment signals displayed by this group are highly predictive of company bankruptcy.

Since the Global Financial Crisis of more than a decade ago, the importance of credit professionals globally has dramatically increased as companies have become increasingly reliant on trade credit financing. In turn, this means that credit professionals in 2022 have more influence over company financing than perhaps ever before. Trade creditors influence the financial wellbeing of companies as the extension of credit provides additional weeks or months of payables cash flow, but it also serves as a form of interest-free short-term debt. By contrast, bank loans and bonds imbed relatively more expensive interest payments, especially for highly distressed companies. Therefore, sentiment signals from this group are highly informative indicators of mounting financial pressure.

FRED Economic Research data for nonfinancial U.S. corporates shows that trade credit funding, as a percentage of the total debt mix, has increased more dramatically since 2009 relative to bank loans. In fact, trade payables financing has reached its highest level of 24.6% since 2007, directly before the Global Financial Crisis. Regarding short-term financing, bank loans have increased by $1.34 trillion to $3.99 trillion over the last decade, whereas trade payables grew by $1.92 trillion to $3.47 trillion, nearly matching bank loans. This 3.6% spread between trade payables and bank loans of the total funding mix is the tightest since 1963.

Nonfinancial corporate trade payables-to-U.S. GDP comes out to 15%, and if the same factor applies to worldwide GDP of $85 trillion, trade payables would be about $12.7 trillion.

However, using the underlying trade payment data for credit decisions has a major downside when dealing with public companies. CFOs know that slow-paying or delinquent payment sends negative signals to the market and therefore tap alternative sources of financing to pay their suppliers in a timely manner and create the guise of good financial standing. Additionally, payment experiences are reported to credit rating agencies like Dun & Bradstreet and CreditRiskMonitor, but they are at least 1-2 months old by the time they are available for decision-makers, assuming they are even truly reflective of risk as noted previously.

Instead, the vital information contained in trade credit moves can be tapped into through the FRISK® score with the aforementioned subscriber crowdsourcing, in real-time.

The AI-driven FRISK® score is based on the "1" (highest risk)-to-"10" (lowest risk) scale, where the “red zone” between “1” and “5” indicates moderate-to-severe bankruptcy risk over the course of the coming 12 months. Subscriber crowdsourcing provides several benefits to risk professionals, including: 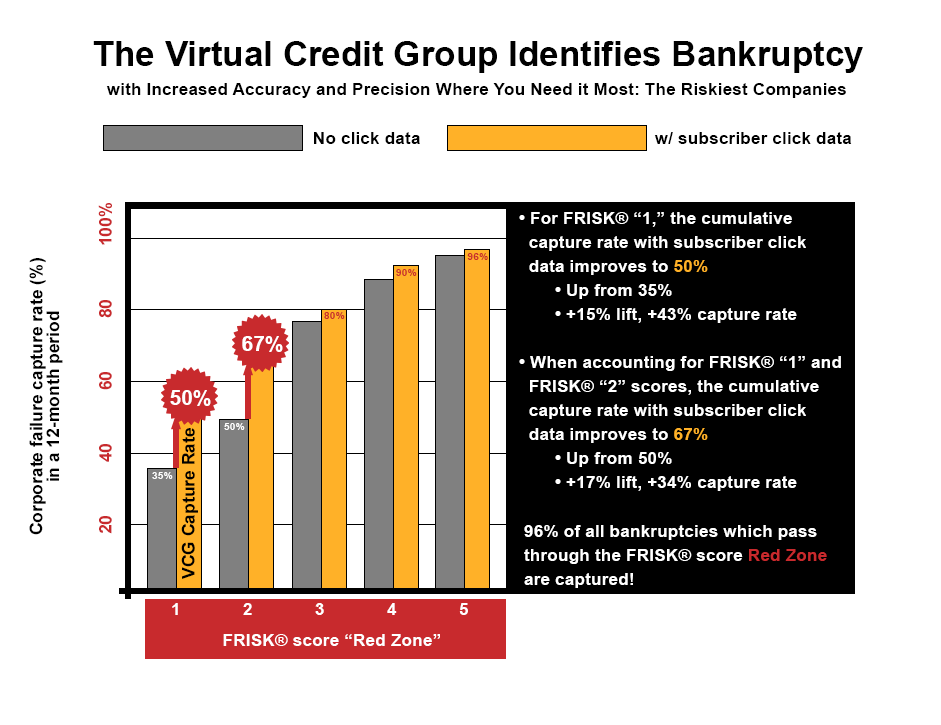 Here’s where it can go sour fast: many risk professionals continue to utilize and/or develop a variety of models that outright fail to provide a consistent and accurate result for identifying company bankruptcy risk. A common refrain heard from this lot is that public companies aren’t risky because new financials arrive and can be evaluated every fiscal quarter. This is a fallacy, for reasons explained below.

Here is a brief outline of other models that don't live up to the accuracy and timeliness of the FRISK® score:

Proprietary subscriber crowdsourcing is a one-of-a-kind solution that integrates credit professional research and behavior into a bankruptcy model. We've come to learn over the years that you, the subscriber, are a very powerful source of financial risk insight - in fact, we have back-tested and proven your insights to be predictive as a standalone risk score. Think about it: with no other data other than your usage patterns, you give us a credible predictive marker.

This information has delivered a significant enhancement to the FRISK® score by capturing the early concern among credit professionals and thereby identifying more bankruptcies. Unlike other risk models available in the market, the FRISK® score provides a consistent and accurate result so you can make better business decisions. Contact CreditRiskMonitor to learn more about subscriber crowdsourcing or get a personalized demonstration today.