Beware of impending airline bankruptcies. Airlines are one of the hardest-hit industries from the coronavirus pandemic with the collapse in passenger traffic. CreditRiskMonitor warned in March that aggregate financial risk in the airline industry ballooned with a growing list of operators being at risk of bankruptcy. Since then, the predicament for airlines has only worsened. According to the International Air Transportation Association, the industry’s economic crisis remains severe: “With passenger demand plummeting to unprecedented levels, revenues are falling beyond the ability of even the most extreme cost-cutting measures to mitigate. Airports and airlines continue to face a financial liquidity crisis.”

On Apr. 21, Virgin Australia Holdings Ltd., one of Oceania’s top airliners, was placed into voluntary administration after the government refused to provide bailout funds. The following day, Air Mauritius Limited, located off the coast of Madagascar, was also placed into administration. Then South African-based Comair Limited and Panama-based Avianca Holdings SA each filed for bankruptcy on May 5 and May 10, respectively. The commonality for all: each had a red zone FRISK® score signaling severe financial distress and high risk of bankruptcy for at least 12 months in advance of their respective filings.

Aircraft manufacturers, lessors, parts suppliers, and other third parties are closely observing bankruptcy trends developing across the air transportation industry. CreditRiskMonitor's 96% accurate FRISK® score, which predicts bankruptcy over a subsequent 12 month horizon and updates daily, should be utilized as such by financial evaluators monitoring the industry. The model integrates multiple disparate risk indicators including stock market performance, financial statement ratios, bond agency ratings, and subscriber crowdsourcing. The FRISK® score is based on a “1” (highest risk)-to-“10” (lowest risk) scale with anything in the “1”-to-“5” category falling into the high-risk “red zone.”

Due to the coronavirus impact, more than 40 airlines worldwide have migrated from the medium-risk “blue zone” into the high-risk red zone since late February, indicating significant bankruptcy risk: 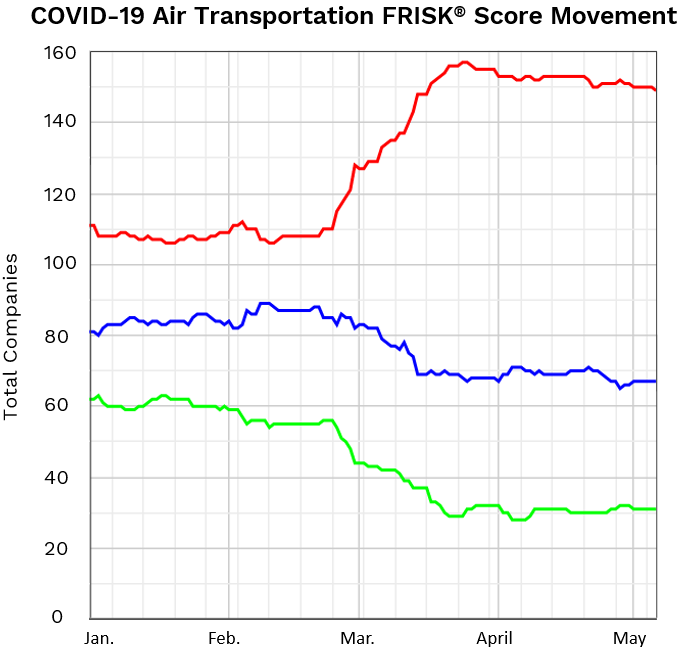 Within the high-risk group, a frightening number of renowned airliners have migrated into this population, as each trends well below the airline industry average FRISK® score of “4,” as shown below:

Within the U.S., the Transportation Security Administration (TSA) provides daily traffic updates, which are trending 90-95% below comparable months in 2019. Traffic weakness has caused extremely aggressive monthly cash burn rates for airlines. While governments have approved bailouts through the form of grants and loans to aid liquidity, these capital injections haven’t been enough to placate creditors.

American Airlines Group Inc. stands among the most distressed with a FRISK® score of “1,” which indicates 10-to-50x higher bankruptcy risk compared to the average public company. One of the prominent negative factors within the FRISK® score computation is subscriber crowdsourcing, which reflects research patterns by risk professionals from more than 35% of the Fortune 1000. Commencing in March, their aggregated views reflect pessimism about the financial viability of American Airlines: 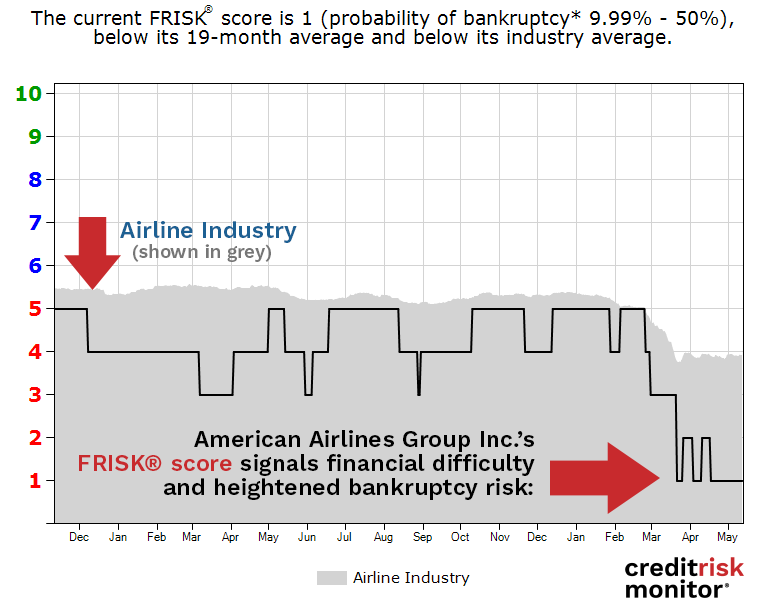 That unfavorable outlook, immediately reflected in the FRISK® score, shows the inherent value of crowdsourcing, as it predated American Airlines’ weak first quarter report relative to other industry majors:

All airliners have significant fixed and semi-fixed costs including maintenance and repair, insurance, leases, ticketing, station, and administrative expenses. Although American Airlines had similar revenue declines to other airliners, operating the largest aircraft fleet resulted in a steeper margin collapse. According to American Airlines’ first quarter filing, net operating costs actually increased year-over-year, primarily due to higher labor, severance, and regional expenses. The company reported a $2.2 billion net loss and shareholders’ equity declined to a fresh low of negative $2.6 billion. Worst of all, American Airlines carries the highest leverage in the group with a total debt-to-assets ratio of 43%.

The company reported a fleet impairment charge of $744 million after disposing of aircraft following the coronavirus-induced demand collapse, also higher than the other majors. Yet, management decided to maintain its new aircraft deliveries from Boeing and Airbus, according to Reuters, despite the fact that other operators have halted purchases as a means of preserving liquidity. The company’s regulatory filings show substantial purchase commitments of 121 aircraft by the end of 2022 against its current fleet of 850. That's only the next two and a half years, the longer-term outlook is even worse. Management discloses within the Management Discussion & Analysis (MD&A) that the company has yet to obtain adequate financing to achieve its current five-year strategic plan: “Significant capital resources will be required to execute this plan. We estimate that, based on our commitments as of March 31, 2020, our planned aggregate expenditures for aircraft purchase commitments and certain engines on a consolidated basis for calendar years 2020-2024 would be approximately $8.4 billion.”

American Airlines' cash burn only accelerates in the coming quarters due to lower load factors. The MD&A provides further detail on its liquidity profile stating “we expect to have approximately $11 billion of liquidity at the end of the second quarter.” The company anticipates securing an additional $4.75 billion in cash through senior debt, but by pledging the remaining $10 billion of its unencumbered assets with a loan-to-value of 40-50%. Consensus also suggests that air traffic for 2020 and 2021 will be meaningfully below pre-COVID-19 levels. With an anticipated slow recovery, according to the Wall Street Journal, airline executives are trying to figure out ways to make passengers feel safer. On the cost side, management reduced its workforce and deferred pension contributions until 2021. The pension plan remains woefully underfunded with plan obligations exceeding assets by $6+ billion.

Debt covenants could become an issue over the next 12 months too. Among the most prominent is the secured term loan and credit revolver unrestricted cash requirement of $2 billion. Derivative markets are signaling danger as credit default swap premiums have escalated. When the CARES Act was passed on Mar. 27, American Airlines' one-year CDS were only 1,700bps but have now reached 8,100bps in mid-May. The five-year CDS worsened at a similar pace, going from 1,200bps to 6,200bps, according to Factset data.

Corporate bankruptcies are piling up with the coronavirus, but airliners are feeling more pain than most with virtually nonexistent revenue and poor recovery prospects in the coming years. About 150 public company airliners remain financially strained based on the FRISK® score.

American Airlines, despite being the recipient of billions in U.S. government bailout funds, is still a high-risk situation. As a comparison, even after General Motors received U.S. Treasury TARP funds in 2008, it still proceeded to file bankruptcy. Call us at 845.230.3000 and we can walk you through CreditRiskMonitor's detailed credit report on American Airlines or the industry as a whole to show how troubled the space is today.