PHI, Inc. (“PHI”) filed for Chapter 11 bankruptcy protection after failing to refinance $500 million of senior notes due March 15, 2019. Industry competitor, Bristow Group Inc., has also become financially distressed. At this point, we’ve observed a number of bankruptcies in the helicopter space and unsecured creditors are bearing the brunt of financial losses. CreditRiskMonitor’s suite of services help professionals promptly identify financial risks like these so you can proficiently manage your exposure.

The helicopter industry is intensely competitive and conditions have been challenging in recent years. CHC Group Ltd., one of the larger operators in the space, filed for bankruptcy back in 2016. As a result, the company returned its helicopter fleet to lessors and this increased supply in an already oversupplied market. Later in 2018, the other side of the industry was impacted as helicopter lessor, Waypoint Leasing Holdings Ltd., filed for bankruptcy. In the months thereafter, its assets were sold at auction to Macquarie Rotorcraft Leasing.

Towards the end of the first quarter in 2019, PHI filed for bankruptcy as aforementioned. Fortunately, our subscribers were warned well in advance of this company’s bankruptcy risk. PHI’s FRISK® score was trending firmly into what we call the “red zone,” the lower half of the “1” (highest risk)-to-“10” (lowest risk) scale, for more than a year’s time. The bottom half of our scale warns if a business is showing acute signs of financial stress. PHI's FRISK® score trended deeper into the red zone in the fourth quarter of 2018, which indicated increasing risk of bankruptcy: 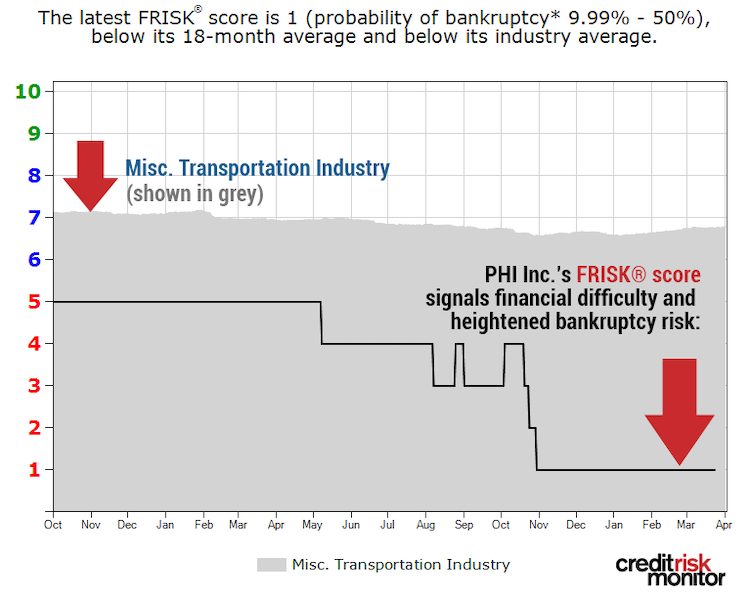 In the quarters leading up to its bankruptcy filing, PHI had more than $500 million in tangible net worth. As such, creditors would typically have some degree of protection. Yet management was unsuccessful in its attempts to refinance, in part due to its weak operating performance.

The business actually reported free cash flow losses in each of the last three fiscal years preceding its bankruptcy filing. This persistent hemorrhaging of cash primarily stemmed from its expanded oil & gas segment - the company acquired the offshore helicopter services business formerly conducted in New Zealand, Australia, the Philippines and Papua New Guinea by HNZ Group Inc. in December 2017. In fact, this division showed negative operating margins in the range of low-single-digits to high-single-digits over the period. Between fiscal year-end 2016 and 2018, that cash burn led PHI's total cash and short-term investments to shrink from $292 million to $65 million, a decline of 76%.

As stated in PHI’s recent Form 10-K filing, the company recorded impairment charges for goodwill, intangible assets and long-lived assets, of over $109 million for the year ended Dec.31, 2018. Accordingly, total shareholders’ equity was reduced by 18%. It appears now that the company's assets weren't worth as much as expected. Based on the Company’s Disclosure Statement of Reorganization under Chapter 11 of the Bankruptcy Code, only “other secured claims” and “intercompany interests” will be “unimpaired,” whereas all unsecured claims are “impaired.” Therefore, unsecured claims may take a haircut after all payments are made.

There’s another problem brewing in the industry, however, with Bristow Group Inc. This major helicopter services provider should be watched carefully since its FRISK® score has predominantly trended in the red zone over the past 18 months. At the end of 2018, Bristow Group’s FRISK® score experienced a sharp decline: its current score of “1” represents a bankruptcy probability as high as 50% in the coming year. 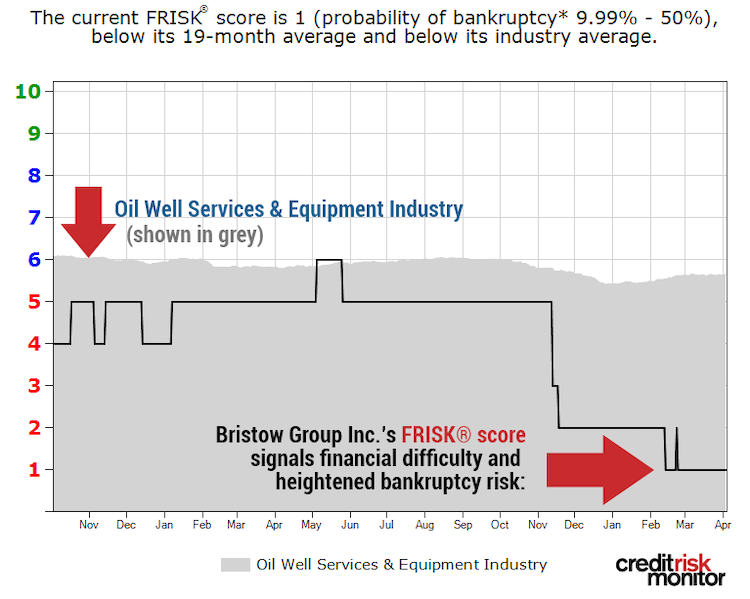 It is worth highlighting that CreditRiskMonitor’s subscriber crowdsourcing impacted the FRISK® score starting in November of 2018. Essentially, the aggregate research patterns of subscribers through the CreditRiskMonitor web service indicates concern about Bristow Group’s financial health. This proprietary information improves both the timing and accuracy of our bankruptcy predictions and it is still flashing a warning signal about the company today.

Going over recent developments may help explain why subscriber crowdsourcing is signaling risk. While Bristow Group’s tangible net worth has consistently held at approximately $1 billion, it may be of little help when considering the aforementioned events that transpired at PHI. Bristow Group has been mired with persistent operating losses and interest expenses have been cumbersome too. Looking back at the last five years, the business has consistently reported negative free cash flow.

Making matters worse, Bristow Group disclosed in a February 2019 press release that it had to terminate its proposed acquisition of Columbia Helicopters, Inc., without providing any specific reasons. It simultaneously disclosed that it was unable to file its 3rd quarter report with the SEC after identifying a material weakness in internal controls. Including the unaudited results reported in the press release, Bristow Group generated a cumulative net loss of $363 million in the trailing 12 month period, the worst in its reported history. The company also recently announced that it would delay an interest payment on its debt. If we compare the situation at Bristow Group to the eventual bankruptcy of PHI, unsecured creditors should definitely be on the lookout here too.

The helicopter industry has observed three multi-billion dollar bankruptcies in the last few years as CHC Group Ltd., Waypoint Leasing Holdings Ltd. and PHI, Inc. sought out court protections. Some may not have seen PHI’s bankruptcy as a probable outcome, but the FRISK® score warned that it was at a heightened level of financial distress approximately 12 months in advance of the filing. Bristow Group Inc. has also been caught in the industry headwinds and its FRISK® score has recently fallen to a “1.” Amid all this danger, it seems that unsecured creditors are the most vulnerable. If your company is a counterparty to any business in the helicopter industry, contact CreditRiskMonitor to see how we can help you proactively identify and manage financial risk.