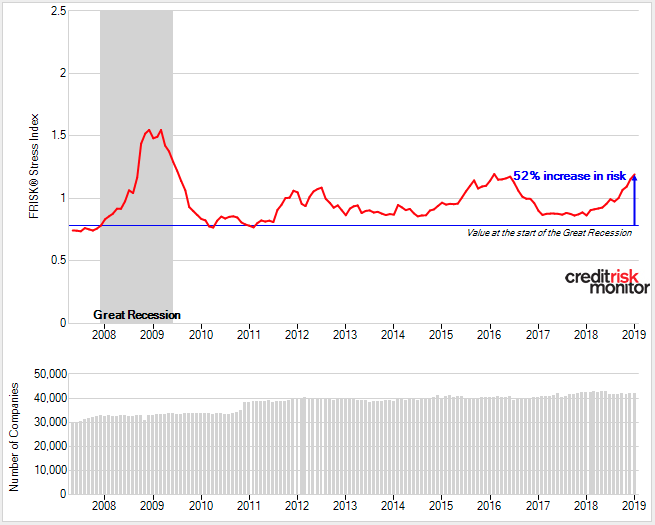 Based on this recent uptrend, we believe that professionals within credit, supply chain and finance should be vigilant about rising bankruptcy risk at public companies. Our breadth of coverage spans tens of thousands of corporations globally and approximately 35% fall into the FRISK® score “red zone” – a category that signals heightened financial distress and elevated risk of bankruptcy. In our view, cyclical and capital-intensive businesses will be the most vulnerable to failure.

In the Federal Reserve Board’s Financial Stability Report issued in November 2018, monetary policymakers provided a balanced view on the state of the U.S. economy. Most noteworthy, they disclosed that debt owed by businesses now stands at an unprecedented level. While the Fed’s statements only pertained to U.S. corporations, this excessive debt situation exists for corporations around the world.

Junk debt and leveraged loans at U.S. public companies now exceeds $2 trillion. Further, the Fed added color to the debt problem by explaining that underwriting standards for leverage loans have loosened significantly and are now worse than the behaviors exhibited in 2007. It appears that more public companies than ever before will be exposed to heightened credit risk during an economic downturn.

Another concerning subject matter the Fed noted in its report is that the size of the junk bond market could balloon considerably during a contraction. In fact, the Fed observed quality weakness in the investment-grade debt market by stating: "Around 35% of corporate bonds outstanding were at the lowest end of the investment-grade segment, amounting to about $2.25 trillion…in an economic downturn, [there could be] widespread downgrades of these bonds to speculative-grade ratings."

With net debt levels trending at record highs for the average corporation, even a modest hit to operating earnings and cash flow will spike leverage ratios. In those cases, credit downgrades would follow accordingly. If that happens to enough companies, the size of the high-yield debt market would meaningfully expand.

If such a shift unfolds, it will exert price and liquidity pressures into the credit market precisely when the economy is weakening. On a granular level, speculative-grade issuers could have difficulty maintaining access to borrowing or will have to borrow at significantly higher rates. With this backdrop, it appears that credit quality will diminish across the board and the frequency of corporate bankruptcy filings will increase – perhaps sharply.

This credit bubble exists throughout the entire world; using U.S. public companies as an example, it’s clear that professionals should be proactive with their risk evaluation and mitigation procedures. According to a scenario analysis created by CreditRiskMonitor, public company unsecured bondholders could face a catastrophic gross loss of $1.2 trillion during the next downturn.

CreditRiskMonitor has calculated this estimate based on the current non-financial corporate debt-to-GDP ratio of 46% against the average default rate of 12% during the last three recessions. This $1.2 trillion in losses, which does not account for recovery rates, will directly stem from high-risk public companies.

Any public company that files for bankruptcy will inevitably have a negative impact on its business partners and counterparties. Commercial suppliers – trade creditors – have substantial exposure given they stand below most lenders in the priority of payment and therefore will incur significant financial loss in the event of a bankruptcy. Alternatively, corporate supply chains would be disrupted by vendors trending toward bankruptcy, especially if the outcome is liquidation.

In 2019, CreditRiskMonitor’s FRISK® Stress Index on public companies shows that risk has materially increased since the beginning of the Great Recession. The Federal Reserve recently voiced concerns about excessive corporate financial leverage, which should also trigger risk management departments to implement high-quality processes today to diminish the problems set to transpire in years to come. Professionals employed at more than 35% of the Fortune 1000 as well as many large corporations internationally are already using the CreditRiskMonitor service to do just that.