One of the largest fuel servicers internationally, Greek-based Aegean Marine Petroleum Network Inc. (“Aegean”), filed for bankruptcy on November 6, 2018. CreditRiskMonitor’s FRISK® score identified elevated financial stress for more than a year prior to their eventual filing. Leading up to the distressing events, the Altman Z’’-Score (Z”-Score) actually signaled strong financial health for the business. The Z’’-Score's miss demonstrates why professionals looking to implement a best-in-class risk management system should use the FRISK® score.

In 2017, fuel servicer Aegean experienced some management turnover, but it appeared to be business as usual. For many consecutive quarters, the company reported stable net sales, a mixed margin profile and a reasonably healthy net working capital position. The Z’’-Score, which is a widely used measure of bankruptcy risk based on financial statement data, also indicated that the business had demonstrated persistently sound financial health:

Over the course of these sequential periods, not a single financial ratio used to create the Z’’-Score demonstrated any significant weakness. In fact, EBIT-to-total assets, total equity-to-total liabilities, working capital-to-total assets and retained earnings-to-total assets were positive in every quarter.

Conversely, by the middle of 2017, Aegean’s FRISK® score was trending in the high-risk “red zone” – a category that signals elevated financial stress. The proprietary FRISK® score is created with multiple inputs and is measured based on a “1” (worst) to “10” (best) scale. Any company with a FRISK® score of a “5” or lower is considered to be in a state of heightened financial risk. Aegean's financial stress and bankruptcy risk materially increased as the FRISK® score trended lower into the red zone, as shown below: 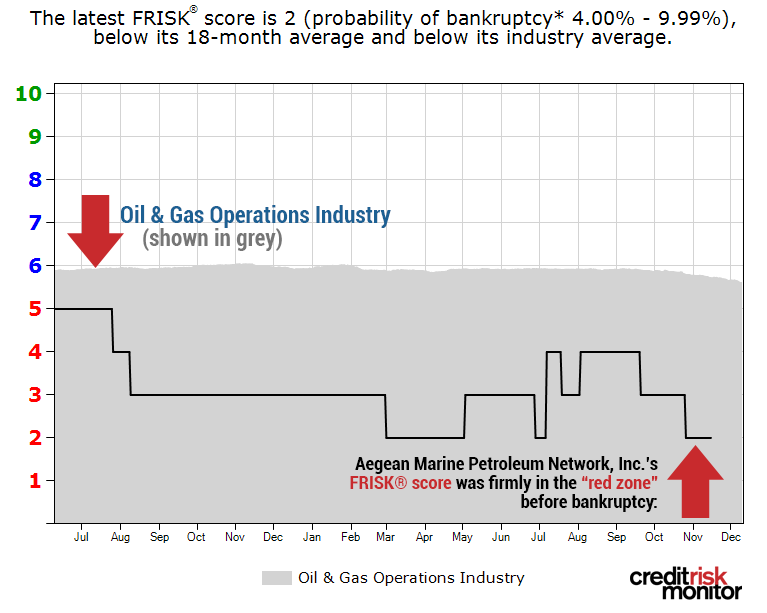 FRISK® scores spanning the range of “1” and “3” are the highest risk categories, highlighting companies that are in severe financial stress. The FRISK® score was within this range for the majority of 2018, which was when the company's underlying troubles started to become clearer.

Trouble on the Horizon

In February 2018, Aegean released preliminary financial results for its fourth quarter ended Dec. 31, 2017, revealing a steep net loss amounting to nearly $30 million USD. This loss came as a major surprise to equity markets and the CFO was replaced shortly thereafter. In May, the company announced that the audit committee of its Board of Directors (“Audit Committee”) was conducting an internal review of its financial reporting. The company subsequently announced that $200 million of accounts receivable at Dec. 31, 2017 would need to be written off, or about one-third of the previous unaudited balance. Some industry watchers suspected the massive write down would trigger financial covenants on the company's debt and ultimately require it to work towards a refinancing agreement.

However, by November of 2018, Aegean’s Audit Committee announced the findings of its investigation which included a variety of fraudulent activities. Some of the findings included misappropriation of cash, accounts receivables and other assets, among many fictitious accounting entries and documentation. It was also revealed that certain employees obstructed the transfer of important corporate documentation, among other subject matters.

Upon the conclusion of the investigation, the company defaulted on its unsecured debt and was forced to file for Chapter 11 bankruptcy. Certainly a disappointing outcome for all stakeholders. Aegean has so far received bankruptcy financing to support the restructuring process and maintain normal operations – notably paying employees and critical vendors. However, the key takeaway here is that a reliance on the Z’’-Score would have led financial counterparties to miss the building risks starting to show at Aegean as early as mid-2017.

The FRISK® score was able to identify Aegean’s bankruptcy risk 17 months in advance, despite deliberate intentions within the company to hide its financial stress. As soon as the company announced that it would be unable to collect a portion of its accounts receivable, the company’s financial condition became unstable and was eventually forced into bankruptcy.

Aegean was fortunate enough to receive special financing from a third party and at least critical suppliers will continue to receive payment throughout the restructuring process. It is unclear if other creditors will be so lucky. Pinpointing danger like this in advance is critical to mitigating risk exposure to financially distressed businesses: a group that the FRISK® score identifies with 96% accuracy. You can help to protect yourself in advance by adding this model to your analytical toolkit.