The Baltic Exchange Dry Index declined by 60% over the last quarter, a clear negative for all dry bulk shipping companies globally. This deterioration was driven by a variety of factors, but the slowdown in the Chinese economy is the most worrying. More specifically, China’s 2018 iron ore imports declined for the first time in a decade, a sign of weakening demand. Risk professionals in dry commodities and those with shipping exposure should actively be monitoring the financial viability of their counterparties – one such major player being Navios Maritime Holdings Inc. out of Monaco.

CreditRiskMonitor is a leading web-based financial risk analysis and news service designed for credit, supply chain and financial professionals. Subscribers include thousands of risk professionals all over the globe, including employees from more than 35% of the Fortune 1000. The service provides commercial credit report coverage spanning more than 58,000 global public companies and many private companies.

Navios Maritime is a large dry bulk shipping company that controls 70 vessels, half of which the company owns outright and half of which are leased. The business has reported nearly 100% asset utilization every year and claims to have industry-leading operating margins. CreditRiskMonitor global service subscribers get a look at our proprietary FRISK® score each and every day which shows high financial distress at this business: 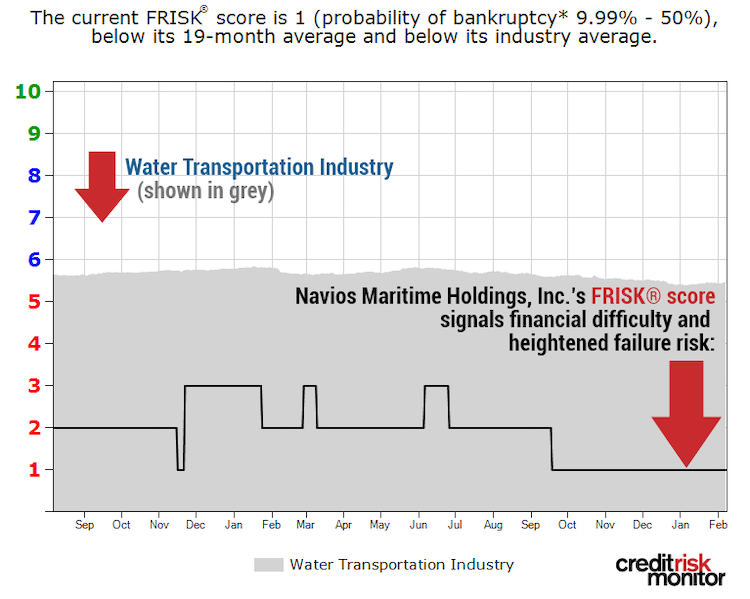 Water Transportation as an industry currently holds a median FRISK® score between “5” and “6.” Navios Maritime, meanwhile, holds the worst-possible FRISK® score of “1,” a category that signals a probability of failure between 10 and 50% over the coming 12 month period. The FRISK® score is based on a “1” (weakest) to “10” (strongest) scale, as shown below:

Regarding performance, Navios Maritime has incurred net losses for six consecutive years, as well as cumulatively negative free cash flow over that period. On a trailing 12-month basis, the business did finally achieve a meager positive free cash flow through higher operating margins; however, its free cash flow margin was still anemic at just 2%.

For a majority of its fleet, management holds charters that expire in less than a year, exposing the business to volatility in contract market rates. Given the recent and severe drop in the Baltic Dry Index – currently sitting near a decade low – the company may be required to renegotiate its contracts to lower levels. Collateral value of the company's ships would also fall with declining market rates.

Asset coverage, similarly, has weakened over time. Regarding tangible net worth specifically, the balance has steadily deteriorated from $827 million to $179 million over the course of the last four years, a decline of nearly 80%. 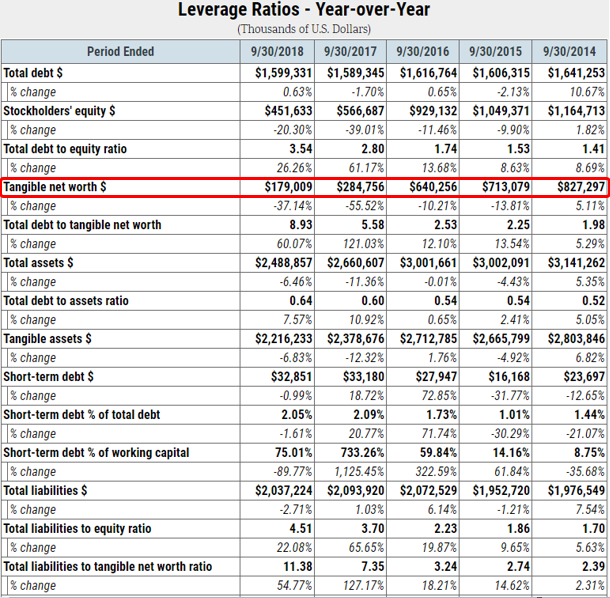 Looking at Q3 2018 period-end leverage ratios, debt-to-tangible net worth is at roughly a nine-to-one margin. Overall, it appears that the business may have trouble adequately deleveraging. Looked at another way: Navios holds bottom-quartile leverage ratios in five of seven categories versus more than 300 industry competitors (in most cases). 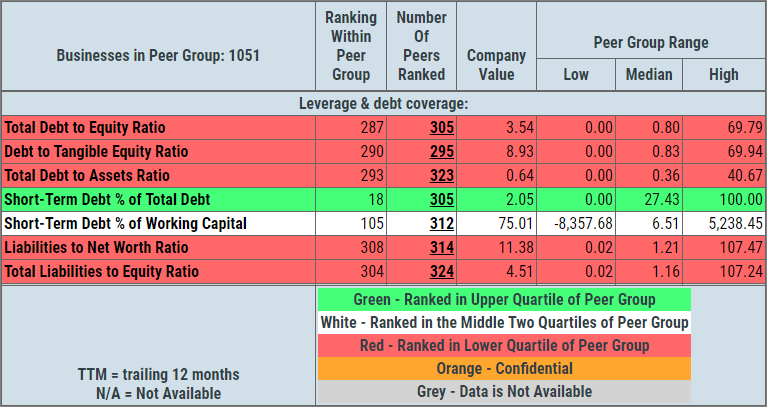 The company maintains equity interests in multiple publicly traded entities including Navios Maritime Acquisition Corporation, Navios Maritime Containers L.P. and Navios Maritime Partners L.P. – equity that could potentially be tapped to raise cash in the future. However, the respective market values of these holdings have eroded significantly complicating such an effort. For example, Navios Holdings owns a large stake in Navios Maritime Acquisition. Its financial position is similarly unsettling, given that it maintains a FRISK® score of “3.” Moody’s currently rates the entity as “B3,” with a negative outlook indicative of a highly speculative credit risk. The storm clouds are mounting for a business which is unprofitable, burning its liquidity and has large debt maturities looming.

Circling back to Navios Maritime Holdings, the last time it tapped the debt market in 2017 and the financing terms were not attractive. The company issued a senior secured bond at an 11.25% coupon rate, well above its average borrowing rate of about 8%. With deteriorating credit metrics, future financing will likely be an ongoing challenge. On a trailing 12-month basis, its interest coverage ratio remains poor around 1.5 times.

With concerns surrounding China’s economy and the sharp decline in the Baltic Dry Index, risk professionals should be vigilant in monitoring the changing conditions in the shipping industry. It’s important to maintain strong relationships with your counterparties, but certain shipping operators could eventually be subject to default or even corporate failure. Navios Maritime caught our attention based on its FRISK® score of “1.” Its deterioration in tangible net worth, limited cash flows and expensive borrowing rates are all concerning factors.