Telecommunications giant Frontier Communications revealed nearly $6 billion in non-cash charges due to unrelenting erosion in its customer base. Cord-cutting and changes in consumer preferences are driving weakness across the industry. CreditRiskMonitor’s proprietary FRISK® score on Frontier Communications sunk to a worst-possible “1” in the spring and has remained tacked there, indicating a substantial near-term probability of a bankruptcy: 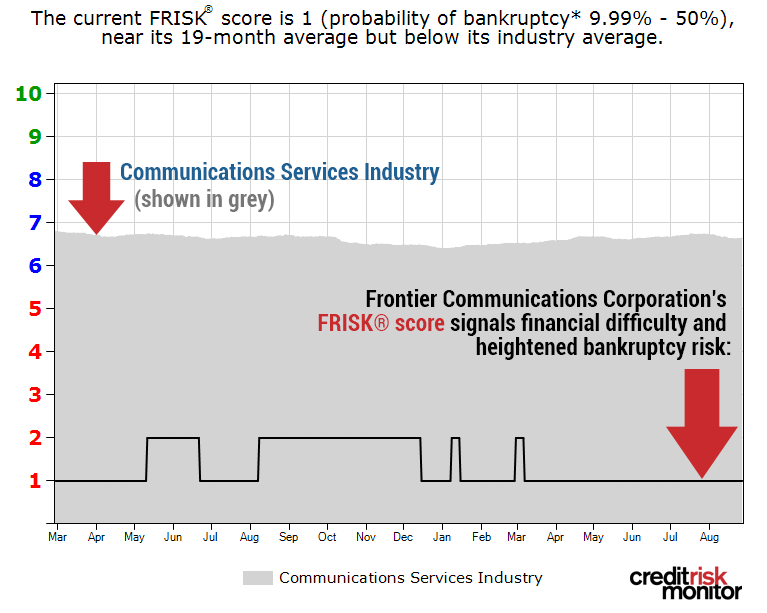 The magic is in the blend: these four inputs balance each other out brilliantly when placed within a formula together. Finding that recipe took a decade of research, as the structural statistical model used for the FRISK® score was developed and back-tested using company data and bankruptcies between 2003 and 2013 – a period of covering 9,600 unique businesses and 580 bankruptcies, with the Great Recession arriving in 2007. The score is also unique in the commercial credit space because it does not use payment data, which our research shows to be misleading for predicting bankruptcy for publicly traded companies like Frontier Communications.

Similar to the challenges Windstream Holdings, Inc. faced prior to its bankruptcy, Frontier Communications has been dealing with a loss of customers and an overleveraged balance sheet.

Subscriber crowdsourcing leverages the research patterns of risk professionals that use the CreditRiskMonitor service and it is inherently predictive of company bankruptcy. The research patterns specific to Frontier Communications in the last three quarters are characteristically worrying and demonstrate trends that correspond with a highly distressed entity. Counterparties doing business with Frontier Communications should warn key financial decision makers within their own companies about its financial sustainability and take action to mitigate risk exposure.

Frontier Communications’ consumer and commercial customer counts declined by 8% and 9%, respectively, year-over-year. Second quarter churn stayed consistent at 2.14%, further demonstrating a lack of stability in the company’s customer base. This trend broadly applies to all categories of cable, broadband and voice/phone landlines. The company recorded a $5.45 billion impairment charge as this erosion is expected to continue, reducing shareholder equity from $1.6 billion in the first quarter to negative $3.77 billion in the second quarter.

Total debt-to-adjusted EBITDA was 4.69x and leverage will continue to escalate going forward. Management indicated they are selling their NorthWest Operations at a significant loss of $384 million, which is partially due to lower industry valuations. Total anticipated cash proceeds from the divestiture will be approximately $1.35 billion, which provides some liquidity against its 2020 and 2021 debt maturities. All said, this transaction is still unlikely to stabilize its capital base.

Frontier Communications has shown an unusually high amount of bad debt expenses on its accounts receivables too; fiscal 2018 totaled $105 million and 2019 YTD already reached $83 million. This cash flow performance is unsettling, whereby fiscal 2018 free cash flow was $620 million and fiscal 2019 guidance calls for a lower range of $290 to $360 million. Unfortunately, these trends make Frontier’s debt structure untenable and sets the stage for a Chapter 11 bankruptcy filing.

Frontier Communications’ deteriorating business fundamentals have been ongoing for years now, and CreditRiskMonitor’s subscriber crowdsourcing has provided an important high-risk signal in the last few quarters. The research patterns that demonstrate this negative sentiment are used in the FRISK® score computation, which helps users identify financial distress and bankruptcy before it occurs. All counterparties should be prepared for a worst-case scenario with Frontier Communications and identify other distressed operators in the telecom industry, such as Cincinnati Bell Inc. with its FRISK® score of “1.”