Residential construction operators have performed well in the United States in the decade since the Great Recession. Tight inventories and persistently low mortgage rates have contributed to a steady increase in U.S. home prices. While the industry is facing some inflation cost pressures, that hasn't hindered residential construction company profitability much. Such is why Hovnanian Enterprises, Inc. (NYSE: HOV) caught our attention with a surprisingly poor FRISK® score of "2."

CreditRiskMonitor's proprietary FRISK® score tracks the financial health of businesses and identifies distress, up to and including bankruptcy risk, with 96% accuracy. A score of "10" suggests little financial risk while a "1" denotes a company facing severe financial difficulty. The CreditRiskMonitor subscriber base includes both credit and procurement professionals, both of whom rely upon daily updated FRISK® scores to identify and address high-risk public companies.

Hovnanian's low FRISK® score shows that large corporations can struggle even in industries going through prolonged expansion. In 2018, Hovnanian’s management team is attempting to fix its unwieldy capital structure. Unsecured creditors, however, could still be impacted at some point in the future.

Construction contractors have faced rising costs tied to labor, land and materials for many years. For example, in 2017, softwood lumber prices soared to record highs -- yet that hasn't stopped residential companies from performing well because steady demand allows for price increases. As a result, financial risk at construction companies has been broadly declining.

Supporting this notion, the FRISK® Stress Index indicates that financial risk for the U.S. residential construction group has continued to trend lower. Today, risk hovers lower within the industry than at any point in the previous decade. The FRISK® Stress Index displays the aggregate probability of failure across any group of companies, whether it is industry, geography or portfolio, looking out 12 months: 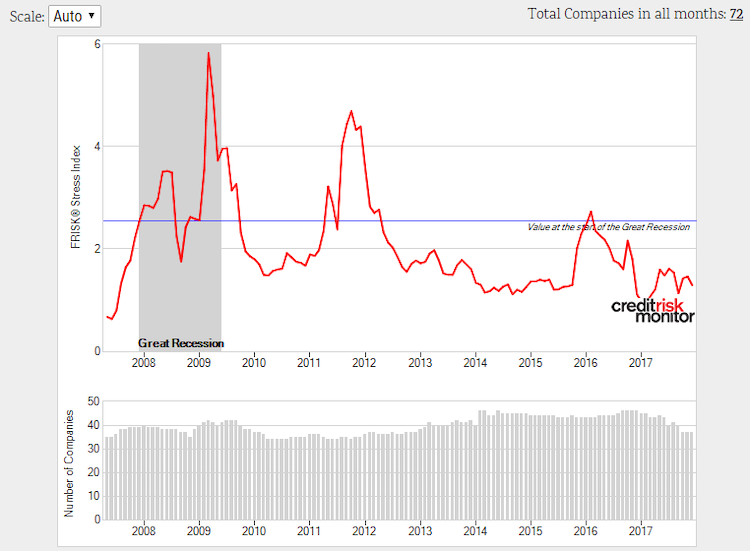 Among the public companies contained in the index, approximately two-thirds maintain a FRISK® score that is trending in either the blue (“6” or “7”) or green (“8,” “9” and “10”) zones. These companies are entities considered to be financially healthy and, on a statistical basis, have less than a 1% chance of filing for bankruptcy over the next year. On the opposite end of the spectrum is the "red zone", defined as a FRISK® score of "5" or less. As stated earlier, Hovnanian is the worst among the group with a FRISK® score of "2".

A quick look at the homebuilder's results helps explain the trouble. Hovnanian's net sales declined 11% year-over-year between fiscal year 2016 and 2017 due to lower contract sales. Worse yet, analysts expect the company will report lower net sales over the course of 2018 based upon reduced investment in its project pipeline. The company's backlog has declined for two consecutive years, which should contribute further erosion in earnings and cash flow on a go-forward basis.

Further complicating an already worrisome situation is the company's burdensome debt load. Based on the period ended Oct. 31, 2017, Hovnanian's trailing 12-month net debt-to-EBITDA exceeded 13 times. This level sinks the company into the bottom quartile of its industry peers. Trouble has also materialized regarding the operator's ability to service its debt. Specifically, reported annualized EBITDA substantially declined between the period ended Oct. 31, 2016 and Oct. 31, 2017, resulting in the company's interest coverage ratio falling below a factor of 1.

In the exhibit below, Hovnanian's FRISK® score of "2" demonstrates ongoing financial stress: 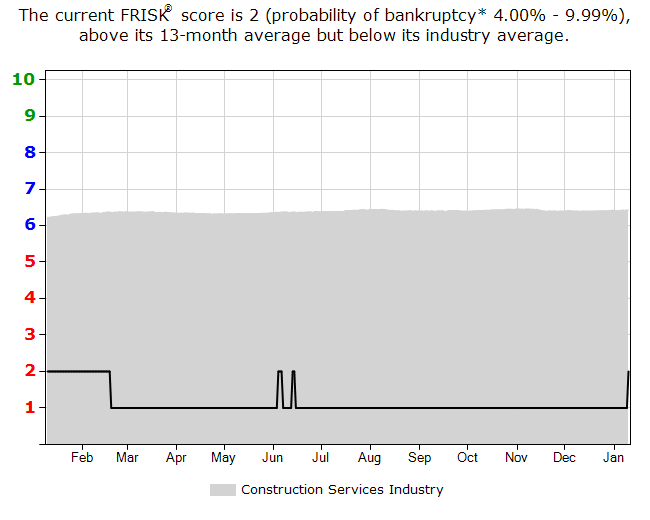 In early January, Fitch Ratings provided a helpful perspective following the release of Hovnanian's Form 10-K for the year ended Oct. 31, 2017. Generally, they view the company's recently proposed refinancing agreement as a distressed debt exchange and therefore downgraded its issuer default rating from "CCC" to "C." Credit agency ratings and evaluations are provided through the CreditRiskMonitor service.

Fitch's review also mentioned an important risk factor to Hovnanian's future operations: "...capital structure is untenable unless the improvement in housing extends for several more years and HOV meaningfully improves liquidity and favorably refinances, or extends, its debt maturities." While the distressed exchange may benefit the company's near-term financial flexibility, its overall financial condition is highly dependent upon the housing market continuing to perform well. Such a positive outcome is impossible to predict with any certainty.

Hovnanian Enterprises' bottom-rung FRISK® score displays the company's heightened financial risk in advance of its distressed debt exchange. Even that effort, however, doesn't materially alter the high-risk scenario unfolding here. Hovnanian exists as a prime example of why counterparties should always perform regular checks on their customers and suppliers, even if that business operates in a low-risk industry.