Steel prices have meaningfully improved over the last two years and this has positively impacted the entire industry. AK Steel, who has benefitted from this trend, recently reported better performance, particularly by showing healthier numbers in both earnings and cash flow. That said, there are other financial risks to consider with AK Steel that both customers and suppliers should be aware of going forward.

Starting with the FRISK® Score

We believe that CreditRiskMonitor’s proprietary FRISK® score should be the first line of defense for risk professionals when considering public companies. The scale, which ranges from a best score of "10" to a worst-possible "1," alerts credit and procurement professionals to those companies that could be a source of risk. If a company’s score falls into the “red zone,” which is the bottom half of the scale from “5” to “1,” buyers and suppliers should pause and further investigate the financial health of that company. Through the years, we’ve seen that 96% of all U.S. public company bankruptcies will enter the red zone within 12 months’ time before declaring bankruptcy. In 2016 and 2017, that accuracy rate rose to 97.9% when considering the 148 public companies which went bankrupt and had a FRISK® score.

A risk professional examining the steel industry would likely spend little time poring over Steel Dynamics' financials, as its FRISK® score is currently a “9,” indicating strong financial health. AK Steel, however, has a FRISK® score of “2,” placing it well into the red zone. 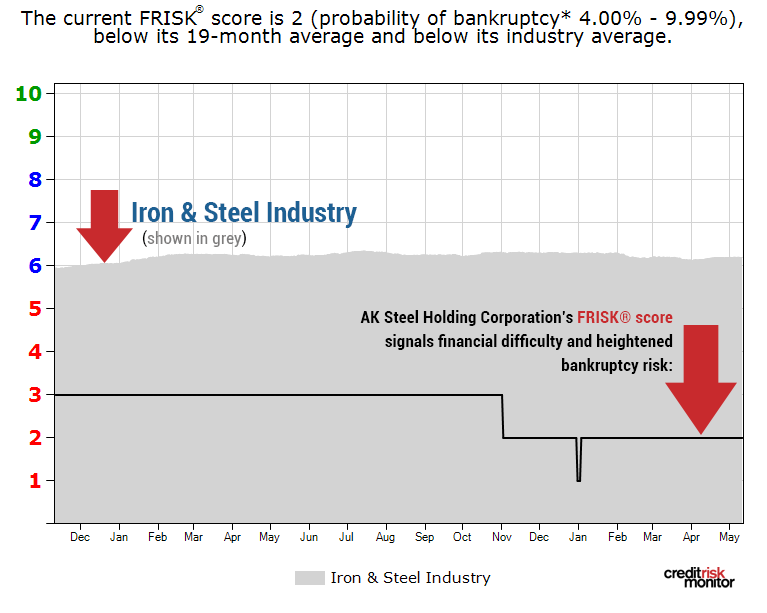 AK Steel Holding Corporation's FRISK® score has been in the risky "red zone" for more than a year. 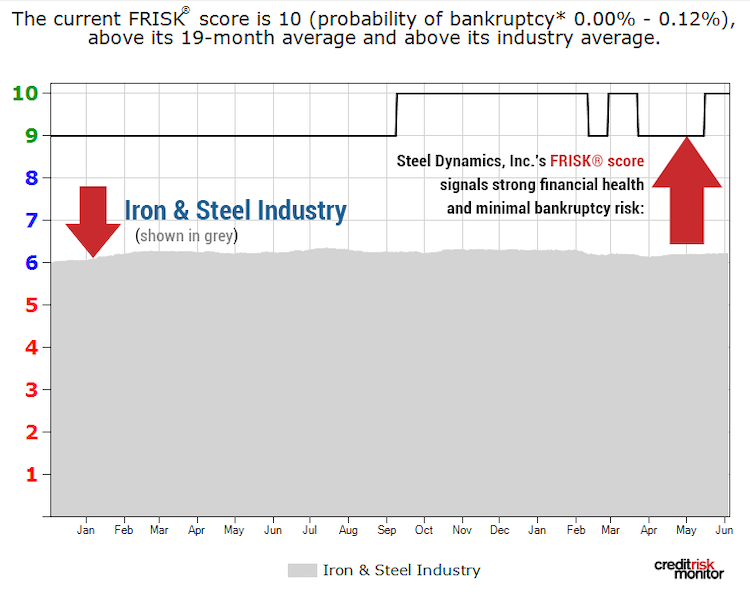 The difference in the FRISK® score is of particular note for suppliers, which may be looking at payment history to discern each company’s financial risk before making a decision on entering a business relationship. In fact, when it comes to making payments to suppliers, both AK Steel and Steel Dynamics have stellar records. The dangerous difference is uncovered with CreditRiskMonitor’s research, which shows that payment history is not a reliable determinant of risk for public companies which often remain current right up until they declare bankruptcy.

Below, we juxtapose and review the financial conditions of these two steel makers using fiscal 2017 data to show the very different financial risks posed by each company. This is information that will help to illustrate why their FRISK® scores are wildly disparate and, more importantly, why both suppliers and customers alike should be closely monitoring AK Steel.

When a company is highly leveraged, it lacks the resilience needed to navigate through economic tumult. AK Steel Corporation’s total debt-to-assets ratio at Dec. 31, 2017 came in at a troublesome 47%. Steel Dynamics, on the other hand, reports a total debt-to-assets ratio of 35% at the same date. Both companies had nearly the same amount of debt ($2.1 billion for AK Steel, $2.4 billion for Steel Dynamics), but Steel Dynamics’ assets, at $6.9 billion at the end of 2017, significantly outweigh that of AK Steel Corporation, which reported assets of $4.5 billion.

For Steel Dynamics, year-over-year cash figures have been steadily increasing. It now has more than $1 billion in cash on hand. AK Steel Corporation, on the other hand, saw its cash balance drop significantly in 2017. In 2018, AK Steel began with a comparatively meager $38 million in cash on its balance sheet. While it's true that AK Steel has access to credit facilities, its cash balance is still unusually low compared to its peers. Looking at this issue in a slightly different way, AK Steel's quick ratio was 0.56 at the end of 2017, while Steel Dynamics' quick ratio was far stronger at 2.19.

Shareholders’ equity provides an additional point of differentiation. Material write-offs during the steel industry downturn that started after the Great Recession have left AK Steel's shareholders’ equity in negative territory. Although the figure improved from negative $978 million at the end of 2015 to around negative $45 million at the end of 2017, as the broader steel industry performance has been improving, the company is still working out of a deep hole. Steel Dynamics, meanwhile, has seen its shareholder equity rise in the last two fiscal years, with it now sitting at roughly $3.4 billion.

While AK Steel’s shareholders’ equity is negative, reported tangible net worth is even worse, declining from FYE16 to FYE17. With no tangible net worth, AK Steel could find lenders less willing to extend a reasonable loan if a steep downturn were to transpire. By comparison, Steel Dynamics' tangible net worth has increased in each of the last five calendar years and now sits at $2.7 billion.

Steel Dynamics is in a stronger financial position than AK Steel. The many differences between these two steel industry participants highlight a key takeaway: When a company's FRISK® score enters the red zone, it is an important warning sign for risk professionals. In fact, a falling FRISK® score is often the first indication that you need to dig deeper to see where a company's weaknesses are. If you are working with AK Steel, risk professionals need to be aware that it is one of the riskier entities in the steel industry. Professionals need to consider risk mitigation strategies today, especially if the steel industry or broader economy were to significantly weaken.