Crude oil prices remain volatile and upstream operators have highlighted prudent spending plans in advance of 2019. Accordingly, demand for equipment servicing has been mixed and some service providers have shown signs of financial stress. Weatherford International plc, one of the largest players in the space, appears increasingly exposed to financial risk based on its excessive leverage and weak cash flow performance.

When the oil and gas exploration & production industry performs poorly, equipment service providers will often end up with less lucrative contracts. Since one provides services to the other this is logical, yet it is an important relationship to keep in mind. Based on CreditRiskMonitor’s FRISK® Stress Index, the drilling oil and gas wells industry has shown a material increase in strain over the course of the last 12 months: 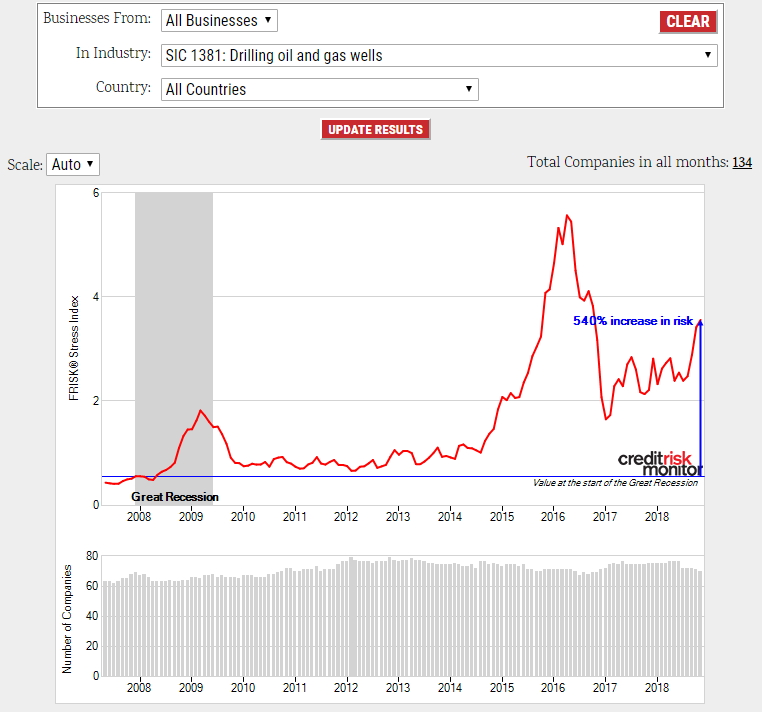 Financial stress for drillers has increased by more than 500% since the beginning of the Great Recession in 2007. This situation is nearly as bad as the calamity experienced during 2016, the year in which oil prices were cut in half. The current level indicates that the average probability of bankruptcy for these companies is about 3.5 times greater than the typical industry covered within CreditRiskMonitor’s master database of international public companies.

Returning to the service providers, some are better off than others – and the FRISK® score will help differentiate the weak players from the strong. The FRISK® score provides CreditRiskMonitor subscribers with a highly accurate, timely assessment of a company’s financial risk using a simple “1” (worst) to “10” (best) scale, as shown below.

Switzerland-based Weatherford International plc is the riskiest company of those highlighted, with a FRISK® score of “1.” This score indicates extreme stress and a 10-to-50% probability of bankruptcy within the next 12 months. Corresponding with the downturn in the oil industry, over roughly the last five years Weatherford has reduced:

While these actions were necessary to cut expenses and preserve liquidity, they have had a negative impact on operations and future prospects of the company. On a sequential quarterly basis, net sales have been flat since the quarter ended Sept. 30, 2017. Moving down the P&L statement, CreditRiskMonitor's industry-level metrics show that Weatherford ranks in the bottom quartile with respect to both operating and EBITDA margins.

On their third quarter conference call, Weatherford CEO Mark McCollum stated that the business must generate approximately $1 billion USD in EBITDA to cover fixed expenses. Management promised to deliver on this target in time, but it could prove difficult. Third quarter trailing 12-month EBITDA reaches approximately $613 million when excluding non-cash charges. Alternatively, if we run-rate the third quarter EBITDA, there is some improvement to $852 million but it is still below the desired threshold. Against $6 billion in net sales, the company would require an EBITDA margin of nearly 17% to hit the $1 billion target, a margin last achieved prior to the oil downturn in 2015. Put simply, the company will effectively continue to bleed cash until it reaches this level.

A weak balance sheet compounds the problem. The company has looked to sell assets to reduce its high financial leverage, but management decided to suspend its outlook on transaction timing. Broadly reflecting the stock price declines year-to-date for equipment service providers, valuation compression may have transpired in the asset market as well. Why does this matter? According to third quarter financials, Weatherford reported its worst ever tangible net worth balance of negative $4.4 billion and a debt-to-assets ratio of 91%. Both are highly concerning figures that speak volumes about the condition of its balance sheet.

Weatherford must materially reduce financial leverage, either by shoring up annual EBITDA or executing reasonably priced asset sales, or a credit default may transpire.

CreditRiskMonitor’s FRISK® Stress Index is once again highlighting elevated financial risk for oil and gas drilling operators. Based on the evidence stated, we believe this is an industry risk to which professionals should definitely pay attention, but it also has a tap-on effect with energy service providers. Specifically, there are offshore equipment service providers that are displaying elevated financial strain, like Weatherford International plc. Based on its FRISK® score of “1,” the business is exposed to increased risk of default and bankruptcy. Unfortunately, the chances of a turnaround appear increasingly remote.