China's National Energy Administration announced in May 2018 that it will cut a substantial portion of its solar photovoltaics subsidies. The consensus view is that solar panel demand in China will fall by approximately one-third in 2018. Since China is the world’s largest solar energy market, this policy change by the National Energy Administration has been weighing on global average selling prices for solar panels. This change will directly weaken the profitability of manufacturers.

Yingli Green Energy Holding Company Limited (NYSE: YGE), currently the tenth-largest operator by shipment volume, has been battling financial distress more than three years. However, it appears that Yingli's risk of corporate failure has substantially increased in the last few quarters. Additionally, our proprietary FRISK® score has highlighted Yingli as one of the most troubled names in the solar industry. This situation shows that even large publicly traded corporations can fall into distress and ultimately expose their customers and suppliers to material financial risk.

CreditRiskMonitor helps risk professionals stay ahead of such hazards, as we offer credit reports with deep analysis that are updated on a daily basis. Our commercial credit report coverage exceeds 58,000 public companies worldwide. With our services, risk management professionals proactively identify healthy and distressed companies across many different industries and geographies. In China specifically, the FRISK® score covers more than 4,000 companies. Our subscriber base includes risk management professionals from more than 35% of the Fortune 1000 as well as many other large corporations around the world.

Tier-1 panel manufacturers, such as First Solar Inc., SunPower Corporation, Jinko Solar Holding Co Ltd. and Shunfeng International Clean Energy, have been reporting mixed annual results on solar project sales. But overall, these U.S. and Chinese-based operators have been averaging healthy double-digit gross margins over the last five years. During this time, the broader industry has massively improved efficiency and reduced the costs of panel products – yet this trend has been a problem for marginal operators. As an example, Germany-based Solarworld AG could not handle persistently low panel prices and ended up filing for insolvency last year. With the latest Chinese subsidy cuts, panel oversupply appears to be an issue once again.

The FRISK® score can help credit and procurement professionals quickly distinguish between solar operators that are distressed and those that are not. Counterparties of all kinds, including utilities, solar installers, polysilicon suppliers, and even competitors can monitor manufacturers that are susceptible to distress and failure. The riskiest operators are those with weak competitive positioning and poor balance sheets – and Yingli falls right into this category.

After reporting full-year fiscal 2017 results, Yingli’s auditors raised substantial doubt about the company’s ability to continue as a going concern. Yingli has been trending in the FRISK® "red zone" for a prolonged period, and as of July 2018, it held the worst possible FRISK® score of "1," as shown below. On the "10" (lowest risk) to "1" (highest risk) scale, this bottom-rung score indicates a 10-to-50% probability of corporate failure within the next 12 months. 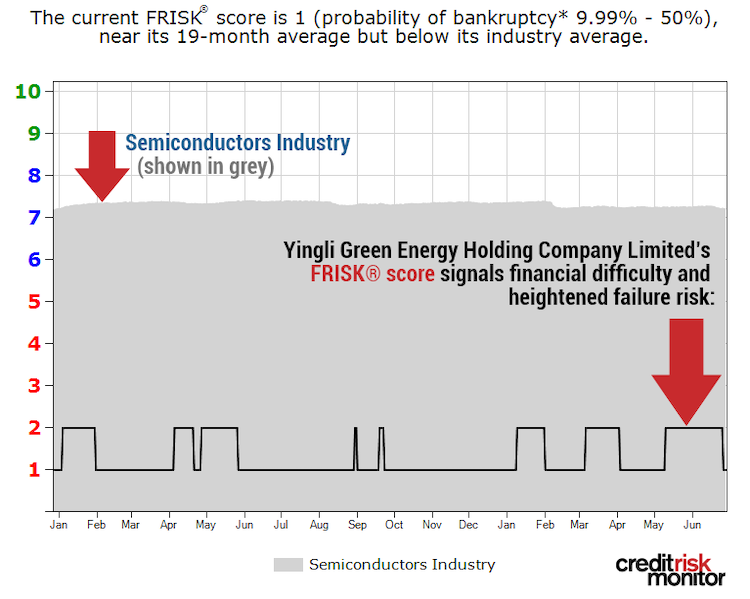 The Chinese government has financially supported Yingli in the past, and may do so again for the purpose of saving jobs. However, without such assistance, Yingli could very well fall into corporate failure. From a financial perspective, the company has been severely constrained by its heavy debt load. Over the last five years, the company’s annual spend on capital expenditures was only an average of 46% relative to total depreciation. This low figure indicates severe underinvestment, and likely reflects deficient spend on research and development as well as maintenance of property, plant and equipment, among other items. Conversely, First Solar’s cumulative capital expenditures have exceeded depreciation by approximately 37% over the last five years, indicating sufficient investment spend.

In the fourth quarter of 2017, Yingli actually reported a negative gross margin after including all related costs of revenue. Based on its 20-F, Yingli has lost most of its market share in Japan over the last three years, but offset most of the lost revenue with a sales increase in its home country. More specifically, sales in China increased from 41% of the company’s total revenue to 77%. Combined with China’s subsidy cuts, Yingli's lack of sales diversification should prove to be problematic and likely result in lower sales and/or weaker gross margins. Therefore, the company looks set to continue reporting steep losses on both an EBITDA and free cash flow basis. In 2017, its free cash flow margin was negative 11.7%, after backing out changes in working capital.

Shifting to the balance sheet, its fourth quarter working capital deficit widened substantially from negative 7.5 billion renminbi to negative 9.7 billion renminbi on a year-over-year basis. This deterioration primarily resulted from its debts being accelerated to current obligations. In fact, its short-term debt alone exceeds cash and receivables by 2.5 times. Pertaining to leverage, fourth quarter debt-to-assets increased from 88% to 113% on a year-over-year basis. Furthermore, all loanable collateral has been exhausted given its negative balances in equity and tangible net worth.

Creditors should be worried. In the last few months, Yingli’s lenders and suppliers have been pressing hard to obtain payment. In April, a supplier filed a request for arbitration, demanding that a deal be made for payment of its raw materials of polysilicon; their case is still ongoing. In addition, a different lender never received payment on medium-term notes that matured. In May, however, the Chinese courts ruled that the lender would be given cash for the notes that matured in October 2015 and May 2016. Effectively, it took two or three years for this one lender to finally get paid. This litigation and settlement only represented around 4% of those medium-term notes outstanding. Unfortunately, creditors have their work cut out for them.

It will be very difficult for Yingli to stage a turnaround, and China’s subsidy cuts will likely only accelerate its distressed situation. Right now creditors are doing everything they can to get paid for their wares, but only so much progress is being made. The company’s steep financial leverage, persistent underinvestment and poor operating performance, in addition to its weak liquidity mean that corporate failure could be right around the corner.

Suppliers and customers should always try to mitigate these high-risk circumstances, as it often leads to lost time and money. Thousands of risk management professionals avoid these problems well in advance by using the resources provided in the CreditRiskMonitor service.