CreditRiskMonitor recently published a High Risk Report on troubled Cooper-Standard Holdings Inc. This detailed report will provide five quick and important facts that you need to know about this OEM auto industry supplier.

1. Heading For a Breakdown

Cooper-Standard Holdings' FRISK® score is "2," which indicates bankruptcy risk is up to 10x greater than that of the average public company over the coming 12 months. The score is among the weakest on the "1" (highest risk)-to-"10" (lowest risk) bankruptcy scale. A mark of "5" or lower falls into the FRISK® score "red zone," indicating that financial counterparties should be paying close attention. The company's score has been stuck in this dangerous territory for over a year and has fallen steadily from a “5” in September 2021 to a “2” in February 2022, where it stands now. A prolonged stay in the “red zone” coupled with a steady decline in FRISK® score representing an approximately 6x increase in predicted bankruptcy probability is a strong signal to apply extra scrutiny when dealing with Cooper-Standard Holdings. 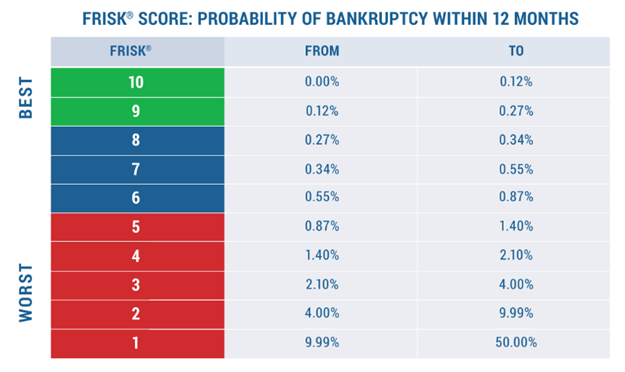 The FRISK® score, which incorporates financial statement ratios, stock market performance, bond agency ratings from Moody’s, Fitch, and DBRS Morningstar, and the crowdsourced research behavior of CreditRiskMonitor subscribers, and captures 96% of all publicly traded companies that eventually file bankruptcy. By combining these four factors, the FRISK® score provides the most accurate bankruptcy risk evaluation in the marketplace, one that is consistently superior to any model basing its predictions on any singular data category, such as financial statements or trade payments.

2. Failing in the FRISK® Realm 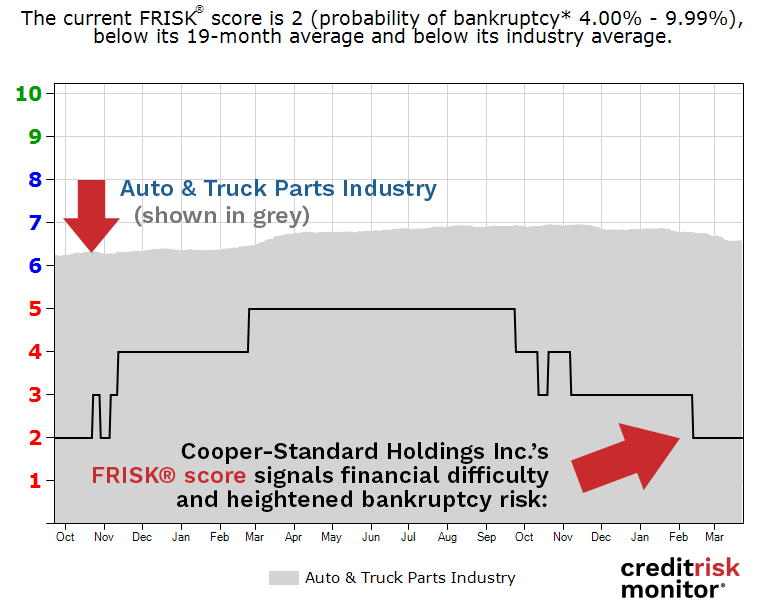 Adding to the issues here is the FRISK® Stress Index, which shows the collective probability of failure in a group of companies (such as an industry, country or portfolio) over the next 12 months. Currently, the FRISK® Stress Index for the Motor Vehicle Parts and Accessories industry is strong historically, sitting at about the level it did prior to the deep 2007 to 2009 recession. That makes Cooper-Standard Holdings' low FRISK® score a standout with customers and suppliers being forced to ask themselves what will happen if the cyclical auto industry hits a rough patch. Relatively poor positioning compared to peers is a warning sign that shouldn't be overlooked.

3. The Zombies Among Us

One of the most troubling factors from Cooper-Standard Holdings’ financials is its interest coverage ratio, or lack thereof. The auto parts supplier ended 2020 just barely covering the interest costs on its debt, which, unfortunately, turns out to be the high-water mark here. It ended 2021 with interest coverage in negative territory. Companies that can't cover their interest costs are often referred to as "zombies" because they are only still operating thanks to the willingness of lenders to overlook deep financial strains.

While historically-low interest rates and a massive appetite for yield have helped many troubled companies muddle along despite obvious problems in recent years, base rates are starting to rise. That means that maturing debt will become an even greater burden for troubled companies like Cooper-Standard Holdings as maturing debts get refinanced. That, of course, assumes they can be refinanced. Notably, the company has roughly $322 million of debt maturing in 2023, another $253 million in 2024, and $402 million in 2026. Collectively that represents roughly 93% of Cooper-Standard Holdings' long-term debt and finance lease obligations.

Adding to the concerns on the debt side of the equation is the fact that Cooper-Standard Holdings has been bleeding red ink for more than a year. That's impacted its ability to cover interest costs, but it has also eaten away at the company's shareholder equity. Ultimately, that's led to a higher total debt-to-tangible net worth ratio. That change has been material, with the figure at 2.5x at the end of 2020 but 8.1x a year later at the end of 2021. The total debt-to-EBITDA ratio was trending in troubling double-digit territory but more recently EBITDA turned negative in the last three quarters of 2021. And the company continues to use more cash than it generates, with negative free cash flow in each of the past five quarters.

In late 2021, the company witnessed two executive departures in China, including a managing director and a president. Although such departures happen at every company, when they occur during times of severe financial headwinds such exits take on increased importance. Financial counterparties seeing such news updates, which CreditRiskMonitor emails to subscribers in real-time, must question whether employees are looking to escape a sinking ship. On the other side of the equation, it's also possible that a company is trying to bring in a better team to clean up the mistakes of prior management. When combined with the financial strains here, senior-level departures should raise concerns about the risk profile of Cooper-Standard Holdings.

Cooper-Standard Holdings operates in an industry that is doing reasonably well from a financial perspective. However, Cooper-Standard Holdings is still one of many high-risk peers. That risk is underscored by its FRISK® score, comparisons relative to peers, the company's inability to cover its interest expenses, its increasing financial leverage, and lack of free cash flow. Adding to the list of worries is the departure of high-level employees, which is an anecdotal symptom of financial stress but one that nonetheless should be considered.

If you work with Cooper-Standard Holdings, you need to pay attention to financial risk now. Contact CreditRiskMonitor today and we'll provide you with a free demonstration of the service and how our bankruptcy models and other tools can help you monitor and manage portfolio risks like the one posed by this auto parts supplier.