Last month, CreditRiskMonitor released a High Risk Report on China Evergrande Group, explaining the increasing bankruptcy risk for the internationally heralded property developer. In this post, we provide five “Fast Facts” about China Evergrande Group’s current fight for survival; not just the financial stressors impacting the company, but also headwinds blowing in the face of APAC-based industry peers as 2022 approaches.

1. Bottom of the Barrel FRISK® Score

Publicly traded China Evergrande Group's FRISK® score sunk from "4" in April to a worst-possible "1" in July. Such a nosedive was noted by our clientele who had China Evergrande Group in their portfolios and almost certainly initiated risk mitigation actions such as discussions about adjusting credit terms, pulling back new credit entirely, and/or an outright pivot to another developer.

For background, a mark of "5" or lower is a telltale sign of financial stress; companies with those scores are classified as being in the high-risk FRISK® score "red zone." 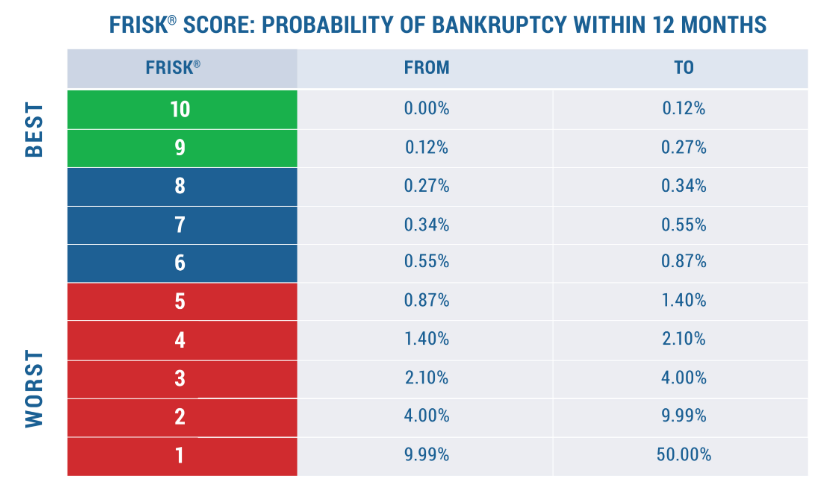 The FRISK® score is a multi-dimensional model that takes into account a company's financial statement ratios, stock market performance, and bond agency ratings from the likes of Moody’s, Fitch, and DBRS Morningstar. We also factor in the research click pattern behavior of our subscriber base, representing key credit decision-makers at more than 35% of current Fortune 1000 companies plus thousands of other large companies worldwide.

By combining these four factors, the FRISK® score provides a more accurate picture of the risk counterparties face than any individual metric can alone.

2. The Z"-Score Missed the Risk

Notably, China Evergrande Group's Altman Z"-Score, which is based on its financial statement data, is not indicating material risk – this can largely be attributed to the lag factor (between three and five months) associated with a financials-only score.

With China Evergrande Group having missed multiple debt payment deadlines, clearly the Z’’-Score has missed the mark. Financial ratios are a crucial piece of the FRISK® score because audited financials can be some of the most reliable data options available, of course depending on the issuer. Yet financial ratios alone do not provide the complete picture that the FRISK® score does by including other important variables, like stock market performance. This is partly because financial statements are inherently backward-looking and investors are always peering into the future, which is reflected in price action. This feature allows the FRISK® score to incorporate the "wisdom of the markets" to help inform subscribers of the risks they face.

Similarly, including click data from the crowdsourced research patterns of CreditRiskMonitor subscribers within our service allows the FRISK® score to incorporate the wisdom of the movers and shakers in the financial world. Essentially, as a logged-in subscriber, you’re part of an all-powerful “virtual credit group,” anonymously pitching in as you evaluate risk.

China Evergrande Group is among the most heavily indebted nonfinancial companies in the world. Astonishingly, H1 2021 total liabilities comes in at $315 billion, which is comparable to a company the size of AT&T in the United States. However, China Evergrande Group’s financials reflect high distress in contrast to AT&T: its debt-to-equity and liabilities-to-equity ratios are well above the operative builders industry averages. Notably, short-term debt makes up more than 40% of the construction company's total debt. This structure increases refinancing risk, as a material portion of the company's debt will need to be replaced over the next year or so. Given the increasingly apparent financial risk here, that could lead to higher interest costs and even less room for the company to maneuver in 2022.

Adding to the risk profile is that China's legal and regulatory environment is relatively opaque compared to those in more-developed Western nations. For example, there have been suggestions that the Chinese government could step in to save China Evergrande Group and equally believable commentary in the media suggests that such a bailout is unlikely. At this point, Chinese authorities have told the company's founder Hui Ka Yan to use his personal wealth to bail the company out. While it is far from clear if he has the means to do this, this suggestion hints that the government may not be so willing to step in. Meanwhile, Bloomberg reported that local governments are monitoring the company's financial accounts to ensure that cash is used to complete construction projects and not diverted to pay creditors.

5. The Canary in the Coal Mine

The last major takeaway from China Evergrande Group's troubles is that it is only one of many large, heavily leveraged construction companies in China. Following the construction company's default, smaller peer Fantasia Holdings Group Co., Limited (FRISK® score "1") defaulted on its debts. And, according to The Wall Street Journal, at least four more developers have either defaulted or requested additional time to make debt payments. Yango Group Co Limited (FRISK® "2") just proposed a debt swap with its creditors in an effort to avoid a default. According to CreditRiskMonitor’s FRISK® Stress Index, which shows the collective probability of failure in a group of companies (such as an industry, country, or portfolio) over the next 12 months, the risk for operative builders in China has reached the previous peak of the Great Recession.

In other words, many other developers are cascading into distress, potential default, and bankruptcy.

If you count China Evergrande Group as a financial counterparty you should be following the company and its financial situation very closely. Many of CreditRiskMonitor's subscribers have been doing so for more than a year by receiving FRISK® score updates, financials, and key news stories every day. Contact us today so we can help you obtain a clear picture of the public company risk coming from China Evergrande Group, its industry peers, and the thousands of other Chinese companies covered.