Earlier this year, we released a High Risk Report on Ferrellgas Partners, L.P., which holds the worst-possible FRISK® score of "1." The financials on this propane distribution limited partnership are weak and financial counterparties should remain alert. Here are the details that you need to know as you perform your due diligence on this high-risk partnership.

CreditRiskMonitor is a leading web-based financial risk analysis and news service designed for credit, supply chain and financial professionals. Subscribers include thousands of risk professionals all over the globe, including those employed by more than 35% of the Fortune 1000. A few of CreditRiskMonitor's most important features are:

Ferrellgas' FRISK® score fell to a "1" in November of 2018, the worst-possible score on the "1" (highest risk) to "10" (lowest risk) scale. It's been stuck there ever since, far below the average of its oil and gas operations industry peer group, which sits between a “5” and a “6.” Both the absolute level of Ferrellgas' FRISK® score and its relative level to its peers speaks to the financial risk here. They highlight the importance of keeping a close eye on the propane distributor today. 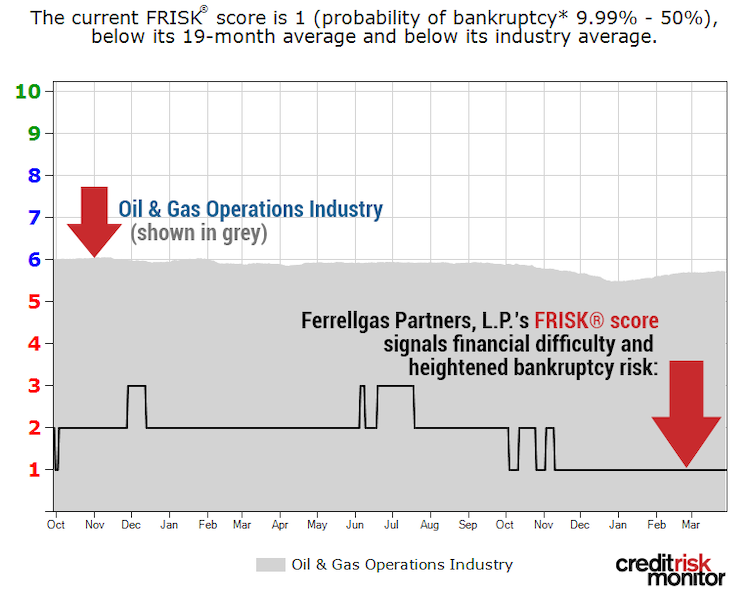 Looking at some specifics, Ferrellgas' free cash flow fell into negative territory in the fiscal year ended July 2018. The trend hasn't improved, with cash flow in the red in the first two quarters of fiscal 2019 and in four of the last five quarters. This is compounded by an extremely weak balance sheet, with a total debt-to-assets ratio of 160%. To say that recovering from a combination of weak cash flow generation and a heavy debt load is difficult would be an understatement.

This troubling state may surprise counterparties that have relied on payment history to track risk. Ferrellgas has remained timely with its payments even while the underlying health of its business has continued to deteriorate, which is known as the “cloaking effect.” Dun & Bradstreet came up with that term following the Great Recession when it determined that payment data is not “...singularly or collectively sufficient to perform the credit analysis needed.” Models that use payment information would include D&B’s PAYDEX® score and our own DBT Index. Our FRISK® score overcomes this blind spot.

The problems Ferrellgas is facing today stem back to 2014, when previous leadership decided to diversify the partnership's business away from propane delivery. Propane delivery is a steady business, but it’s marked by a trend of slow customer attrition as utilities providing natural gas and electric heating options lure customers away. Ferrellgas and its largest peers are essentially serial acquirers in the highly fragmented industry because of their constant need to add new customers to offset the ongoing attrition.

To diversify, Ferrellgas started adding assets in the midstream energy space, buying Sable Environmental in mid-2014 for approximately $125 million. It followed that up with a series of acquisitions, mostly funded with debt. At the same time, it continued to acquire propane distributors to bolster its core operations. The impact on the balance sheet from all these acquisitions was enormous, with total debt rising from roughly $1.6 billion at the end of fiscal 2015 to more than $2.2 billion at the end of the most recent quarter. 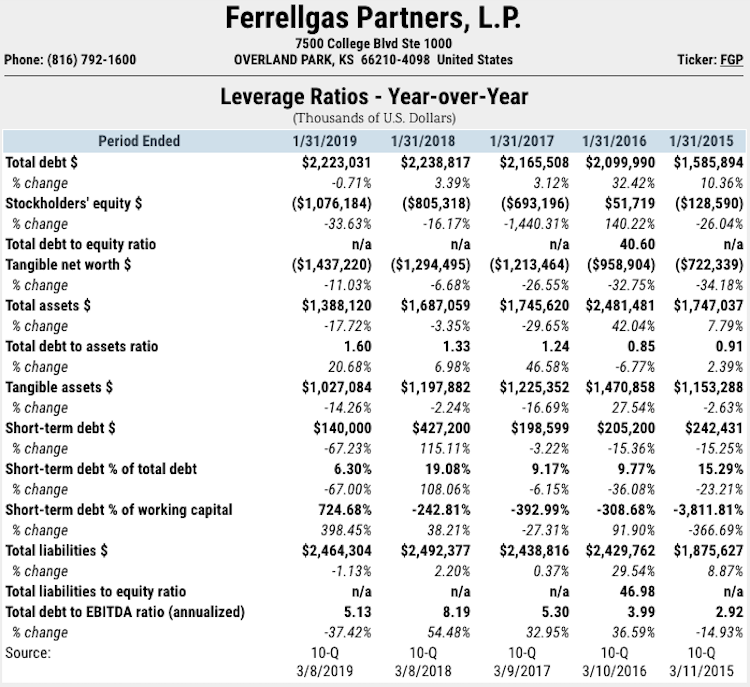 The partnership has little-to-nothing to show for all of that extra debt since it started to dismantle the diversification effort in late 2016 amid weak financial results of the newly acquired midstream assets. Ferrellgas ultimately brought back its founder, James Ferrell, as the CEO, writing down the value of its midstream investments as it sought to sell off the division it had so recently created. As of the second fiscal quarter of 2019, it no longer reports any revenue from the midstream division -- even though much of the associated debt is still sitting on the balance sheet.

In 2019, Ferrellgas has been forced to suspend its distribution so it doesn't breach its debt covenants. Since limited partnerships are specifically designed to pass income on to unitholders, this suspension is a red flag. The ongoing problem here is twofold: first, the propane business requires a continual stream of small acquisitions. Second, with so much debt, Ferrellgas' financial flexibility is limited. And the poor cash flow performance makes it that much more difficult to reduce the debt that's hanging over the partnership's future.

Ferrellgas’ FRISK® score remains at a “1,” which continues to signal high financial risk and an elevated probability of bankruptcy within the coming 12 months. This isn't to suggest that Ferrellgas can't turn things around – its propane business is solid and creditors have been willing to work with the partnership so far. However, it has yet to meaningfully reduce its debt levels and its weak cash flow generation is a troubling sign. This is a counterparty risk professionals need to be closely monitoring today.

CreditRiskMonitor is a financial news and analysis service designed to help professionals stay ahead of public company risk quickly, accurately and cost-effectively. More than 35% of the Fortune 1000, plus thousands more worldwide, rely on our commercial credit reporting and predictive risk analytics for assessing the financial stability of more than 56,000 global public companies.

At the core of CreditRiskMonitor’s service is its 96%-accurate FRISK® score, which is formulated to predict public company bankruptcy risk. One of four key components calculated in the FRISK® score is crowdsourced subscriber activity. This unique system tracks subscribers' patterns of research activity, capturing and aggregating the real-time concerns of what are essentially the key gatekeepers of corporate credit. Other features of CreditRiskMonitor’s service include timely news alerts, the Altman Z”-Score, agency ratings, financial ratios and trends. CreditRiskMonitor’s network of trade contributors provides more than $150 billion in trade data on their counterparties every month, giving them visibility into their biggest dollar risks.