Nation’s Restaurant News reported in September that U.S. chains have shown persistent declines in foot traffic, and this past July and August demonstrated the worst YTD performance of negative 4% year-over-year. If traffic declines persist, then highly indebted restaurant chains could be at risk of bankruptcy.

CreditRiskMonitor’s FRISK® Stress Index on U.S. restaurants (SIC 58) has demonstrated an acceleration over the last three quarters. In October, aggregate financial stress across restaurants reached 1.8x, indicating nearly twice as much risk versus the typical industry. During 2016, a handful of restaurant chains filed for bankruptcy and we’ve reached similar risk levels once again: 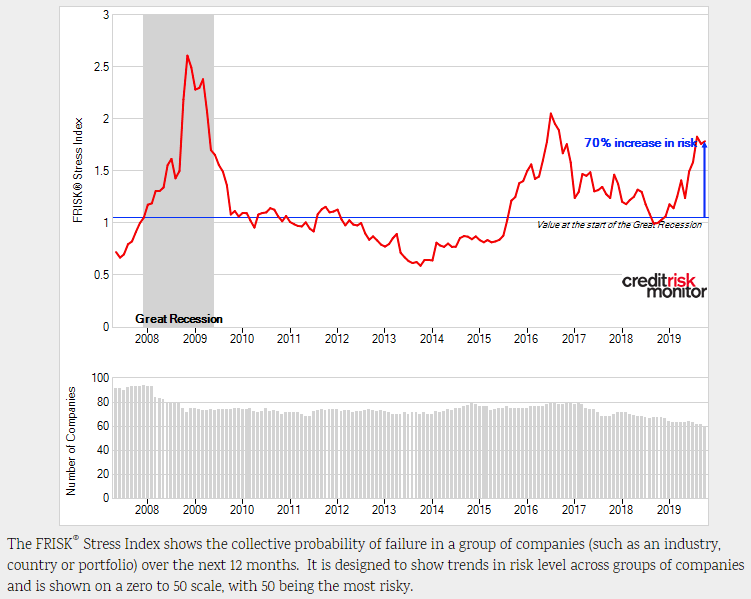 Looking at the FRISK® Stress Index as a barometer, CreditRiskMonitor identifies more than 30 restaurant chains that are financially distressed, some of which have elevated risk of bankruptcy over the next 12 months. If your company is doing business with a restaurant, review your company’s exposure and analyze the counterparty’s financial condition.

Creditors should be mindful of broader economic risk. Restaurants margins have been under pressure and those that have a fragile capital structure will have a red zone FRISK® score and ultimately could trend into bankruptcy. The 96% accurate FRISK® score identifies bankruptcy by using a “1” (most risky)-to-“10” (least risky) scale. Four companies with their FRISK® scores as of Oct. 14, 2019, are shown below, which demonstrates the risk of bankruptcy versus the average 12-month industry bankruptcy risk of 1%:

In an economic downturn, creditors (including landlords and vendors) may face an increasing number of restaurant defaults and bankruptcies. Use the FRISK® score so your company isn’t blindsided.

Dining-out traffic trends are showing persistent weakness and economic recession risk continues to accelerate. If you are working with a restaurant chain that has a weak capital structure, you should implement strategies to reduce risk or otherwise face the possibility of serious financial loss. The four aforementioned operators represent only a fraction of all distressed restaurants in the industry. To stay ahead of public company financial risk in this industry, contact us today at 845.230.3000 or click here.