In early 2020, China-based property developers Macrolink Culturaltainment Development and Yida China Holdings defaulted on their debt as property sales collapsed following the coronavirus outbreak. By July, one of the larger operative builders, Tahoe Group Company Limited, also failed to make scheduled debt payments. There's more pain to come in the Chinese construction market, with several companies that may contend with corporate failure and others that remain financially stressed.

CreditRiskMonitor is a leading web-based financial risk analysis and news service designed for credit, supply chain, and other risk professionals. The core of the service is the 96% accurate FRISK® score, which predicts public company bankruptcy over a subsequent 12-month period. With coverage of more than 57,000 public companies globally, including more than 5,000 between China and Hong Kong, CreditRiskMonitor also provides:

China’s real estate prices have been in an unwavering uptrend over the last decade, in part fueled by government mandates and steady sourcing of Chinese bank debt financing. The coronavirus pandemic, however, is causing a downturn for property developers as volumes seemingly collapsed overnight. In instances where distressed operators have to raise cash quickly, either by accelerating sales or divesting properties to other developers, pricing can approach fire-sale levels.

Macrolink was one of the first to falter. In the year leading up to its default, its FRISK® score was trending in the high-risk “red zone,” the “1”-to-“5” category of the 10-point scale. By March, Macrolink defaulted as it carried an “extremely tight” liquidity condition, according to Reuters. Macrolink Culturaltainment Development is also one of the few property developers that report quarterly, which allows the company to act as the proverbial canary in the coal mine for the industry. Based on the fiscal period ending Mar. 31, 2020 results, total contracted sales declined by 61.1% against last year’s comparable period and by 94.5% on a sequential quarterly basis. Meanwhile, total inventory, defined as property units finished and under construction, remained relatively flat. With nearly all sales halting overnight, Macrolink reported a gross margin loss, incurred significant associates and joint venture losses, and ended with a net loss of $330 million – the most challenging quarter reported in the company’s history.

Since the coronavirus pandemic started, operative builders (SIC 1531) in China and Hong Kong have shown a steep aggregated increase in financial risk. According to the FRISK® Stress Index, total risk today has more than doubled relative to 2007 levels, as shown in the chart below: 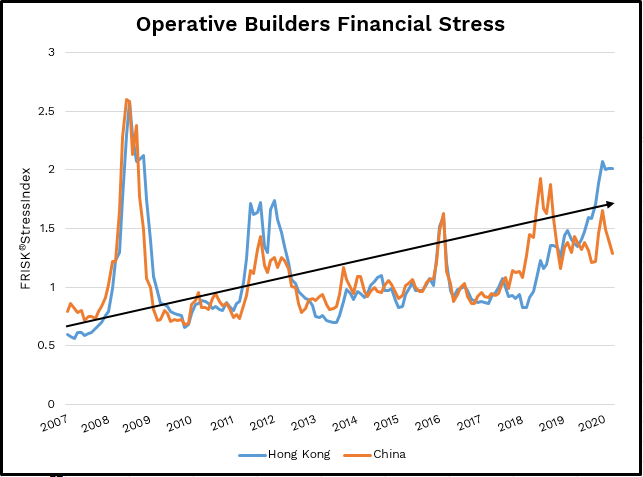 Within the FRISK® Stress Index, approximately 138 companies are currently trending in the red zone, that's 56% of the 245 Chinese construction companies that currently have FRISK® scores tied to their name. Due to the adverse business environment, profit margins have come under pressure. Throughout 2019, Chinese operative builders reported a median pre-tax profit margin of 8.2% which fell to only 3.2% in the first quarter of 2020. Under such circumstances, creditors should be scrutinizing distressed operators more than ever before.

CreditRiskMonitor recommends carefully evaluating companies trending in the FRISK® score “1”-to-“5” categories. All six operative builders displayed below fall into the red zone and beneath the construction industry’s average FRISK® score of “6.” Each company is financially stressed and carries an elevated probability of corporate failure over the next year:

The interest coverage ratio shows whether a company can service payments on its debt obligations. Calculation methodologies vary but the interest coverage ratio in the chart below is more lenient by comparing trailing 12-month EBITDA-to-net interest expenses. Over the last few years, these six operators have largely reported falling interest coverage ratios, with the average decreasing from approximately 8x to only 3x in the second half of 2019. Leading into the first half of 2020, Macrolink dropped to 2x and Tahoe Group to -1x, which are bottom-of-the-barrel coverage levels. 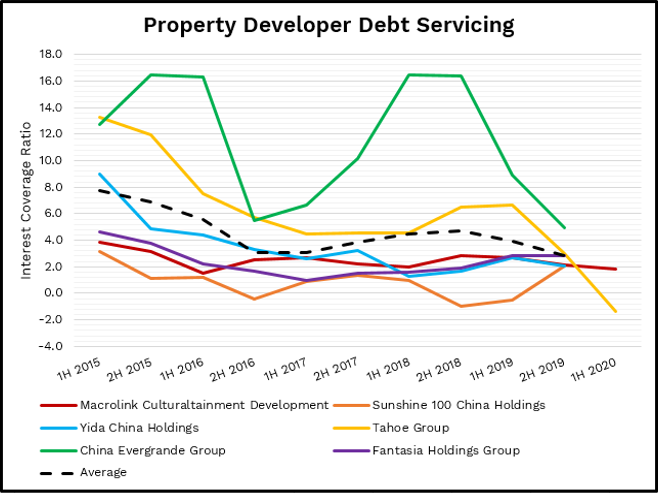 Since many property developers rely upon bank financing more so than bond markets, it is not uncommon to see capital structures frontloaded with term loans. Such arrangements benefited from the PBOC’s decision in the second quarter of 2020 to reduce the loan prime rate from 4.3% to 3.85%. Even still, some companies are too far gone. When comparing short-term debt-to-quick assets (cash, cash equivalents, and accounts receivable), the three aforementioned defaulters all trended well above 100%. This metric explains why Macrolink, Yida, and Tahoe have already defaulted. 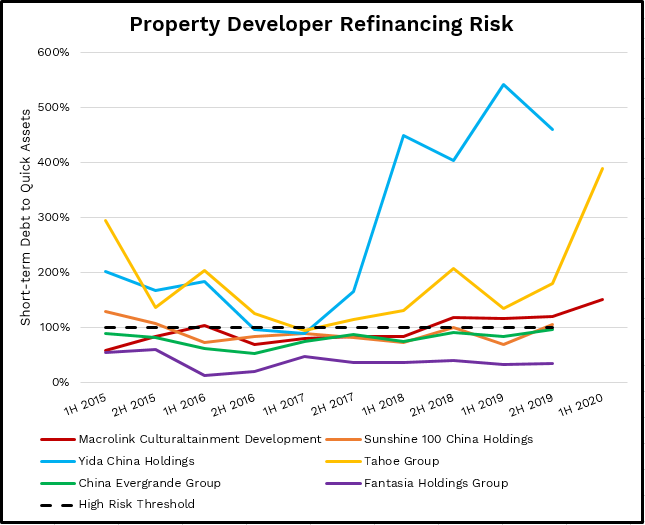 Sunshine 100 also pushed above that high-risk threshold in the second half of 2019, indicating significant refinancing risk. The company’s short-term debt relative to total debt also increased to 42.3%, a high watermark that exposes the tightness of its maturity schedule. Another ¥10.7 billion is set to become current by December 2020, representing ~74% of its remaining long-term debt. With interest coverage below distressed peers, a multi-year low cash balance, and a steep deterioration in receivable turnover, Sunshine 100 is poorly positioned to refinance its USD denominated notes and could also face default.

Among the better positioned, albeit still financially stressed, are China Evergrande Group and Fantasia Holdings Group. Moody’s Investors Service recently carried China Evergrande’s corporate family rating at B1 and switched their outlook to negative. Their rating rationale indicated concern over high financial leverage and poor liquidity: “its current cash holdings, together with its cash flow from operations, will not be sufficient to cover its debt maturities and other obligations through the next 12-18 months, meaning the company will need to raise new debt to manage its refinancing needs.” Yet such concerns are mostly offset by: “Evergrande's track record of accessing diversified funding channels, including the bank and capital markets for debt refinancing.” These solid financing relationships are supported by the company’s large scale, as it contracted approximately ¥478 billion in property sales in fiscal 2019, making it one of the largest construction operators in all of China.

Fantasia Holdings operates with a solid EBITDA margin of 30%, which has remained fairly stable over the last five years, given its heavy exposure to key metropolitan areas. According to Fantasia’s 2019 annual report, it has been most active in property development of Tier 1 and Tier 2 cities, which often afford builders top pricing power. The company also carries a healthy liquidity profile by proactively refinancing its debt. However, it still operates with a high debt burden and limited interest coverage. In the last two years, all of Fantasia’s offshore bond issuances have required elevated coupon rates, ranging between 9.3% and 15%, in line with those offered with highly speculative credit quality. If broader industry conditions remain weak, Fantasia’s credit profile may become a point of concern during its next peak maturity cycle between the end of 2021 and 2022.

China and Hong Kong’s property development expansion cycles have been upended by the coronavirus pandemic in terms of contracted unit volumes. Multiple real estate operators reporting first-quarter results showed significant declines in net sales and profitability. In such a challenging environment, financially distressed operators are defaulting and less capable of refinancing relative to the pre-COVID environment. If relatively smaller distressed builders cannot cure their payments or stretch maturities, creditors may force these particular companies into legal proceedings commensurate with corporate failure. For a free risk assessment on all public construction and real estate companies in the Asia-Pacific region, contact us today to see what more than 35% of the Fortune 1000 use in their daily risk management process.