Unsecured trade creditors will collect less than three cents for each dollar in the Sears Holdings Corporation bankruptcy, according to the Wall Street Journal. Given total merchandise payables outstanding was nearly half a billion dollars prior to filing, losses will be enormous. This disaster shows why credit professionals must continuously and carefully evaluate their exposure to financially distressed public companies.

J. C. Penney Company, Inc. is working hard to avoid bankruptcy too, yet CreditRiskMonitor subscribers are skeptical about whether the business will turn around. In late 2018, CreditRiskMonitor’s proprietary subscriber crowdsourcing revealed high-risk sentiment that has continued into June 2019. Today, the company maintains a FRISK® score of “1,” indicating a bankruptcy risk potential of up to 50% over the course of the next 12 months. 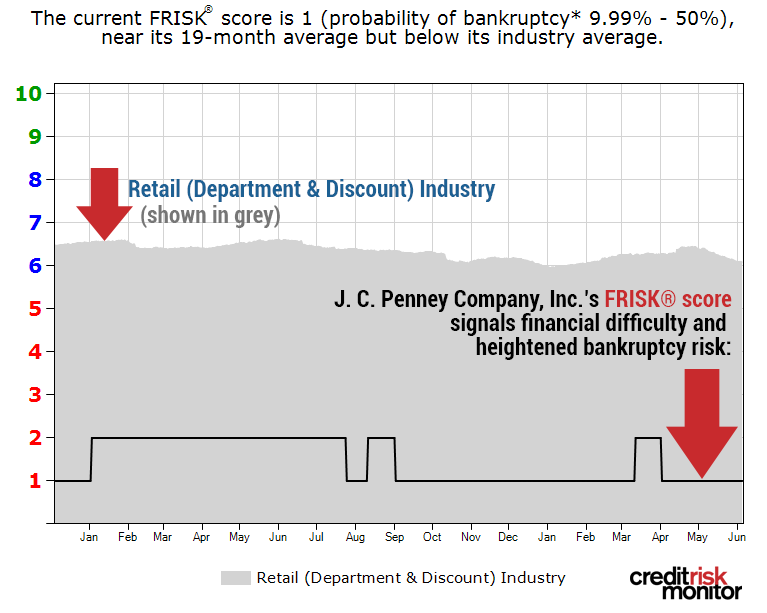 J. C. Penney’s FRISK® score indicates a 10-to-50% probability of bankruptcy during the coming 12 months. Counterparties to J. C. Penney must review the company's financial condition, particularly given that many suppliers have expressed concern since last fall.

While the company has some cash and an untapped credit revolver, a loss in supplier confidence would collapse its cash flexibility. Before Sears’ bankruptcy, CreditRiskMonitor identified a working capital squeeze that lasted for more than two years. Sears’ management was forced to rapidly sell brand assets and properties. Yet none of the actions taken were enough to stave off bankruptcy. J. C. Penney’s inventory financed by vendors has held steady at 34% but that could soon change.

J. C. Penney reported same-store sales of negative 5.5% in the first quarter of 2019, indicating a further loss of market share. Industry consensus shows that online retail will represent all incremental sales growth starting in 2020, yet J. C. Penney does not report online sales as a percentage of the total mix.

The company recently invested in data technology to optimize inventory management and improve sales traffic. Results have been anemic so far and 2019 guidance is calling for a year-over-year 20% reduction in capital expenditures. Less investment will weaken its competitive positioning versus other department stores, off-price retailers and specialty apparel retailers.

While positive cash flow is projected for fiscal 2019, operating margins have been deteriorating. Accordingly, total debt-to-trailing 12 month EBITDA increased from 7.4 times in the Q4 2018 to 8.2 times in Q1 2019. J. C. Penney’s debt-to-tangible net worth of seven times also ranks in the bottom decile against its retail industry peers.

Management implemented a full sweep inventory liquidation over the last year, which generated $470 million in cash flow. Despite this boost, total cash has actually declined to a new low of $171 million. If suppliers tighten their credit policies by shortening payment terms or increasing late fees, it will have a devastating outcome on overall liquidity.

Sears’ suppliers will receive almost nothing in return for their goods and services according to the courts. That's a huge warning to all vendors working with any troubled retailer, particularly J. C. Penney. Although J. C. Penney’s liquidity is adequate today, crowdsourcing is signaling elevated concern in 2019. All counterparties should prepare for a worst case scenario, especially with J. C. Penney's increasing bankruptcy risk.