The coronavirus pandemic has triggered the mammoth Global Debt Crisis for public companies. Production facility shutdowns and labor shortages have sparked supply chain disruptions worldwide. U.S. corporate revenue and cash flow declines are expected to be sharp in the first half of 2020, which have blown out corporate credit spreads and magnified bankruptcy risk concerns. The Wall Street Journal, the New York Times, and Investor’s Business Daily are criticizing the corporate debt binge and balance sheet fragility that will exacerbate the pending economic downturn.

“Corporate debt, the most worrisome type at the moment, stands at about $10 trillion and has made a steady climb to 47% of gross domestic product, a record level, from around 40% a decade ago. Borrowing has been so cheap that chief financial officers have loaded up on debt they didn’t really need.”

CreditRiskMonitor forecasts U.S. nonfinancial corporate debt will produce financial losses surpassing $1.2 trillion for bondholders by 2021. Equity markets have lost trillions in market capitalization, evaporating the last line of defense for unsecured creditors. Under bankruptcy restructuring laws, trade creditors stand at the bottom of the payment priority waterfall and will incur billions in write-offs if action is not immediately taken to reduce risk exposure.

Leveraged companies issuing new debt or refinancing large debt balances will be challenged going forward. The High Yield U.S. corporate credit spread, representing a $1.2 trillion in the junk debt market, increased by 2.5x in only four weeks to 9% and was the sharpest increase in more than 10 years. The BBB U.S. corporate credit spread, representing a debt market of more than $3 trillion, has increased to its highest level since the Great Recession, or 3.7%, according to Fred data. Corporate issuers that lose their investment-grade status will have interest expenses increase as their debt matures, deeply cutting into net profitability and free cash flow: 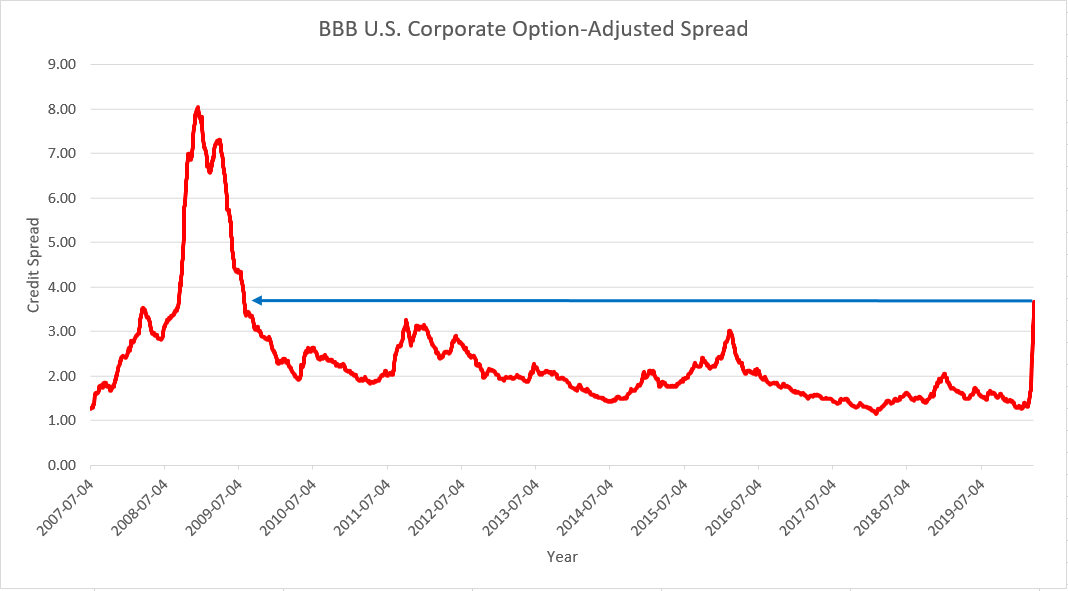 "But an economy can’t turn on and off like a light switch. Shut-down businesses must still pay debts, rents, payrolls and taxes. Our economy runs on a river of debt, and the debt clock keeps ticking when the economy shuts down."

Companies will experience cash flow declines but debt interest expenses will continue accumulating, if not rise. Industries worst affected by the coronavirus outbreak include airliners, cruise lines, casinos, restaurants, retailers, shipping, trucking, manufacturers, oil & gas, coal, metal mining, chemicals, and others. The FRISK® Stress Index shows the collective probability of failure in a group of companies over the next 12 months, and has reached 2008 Great Recession levels. 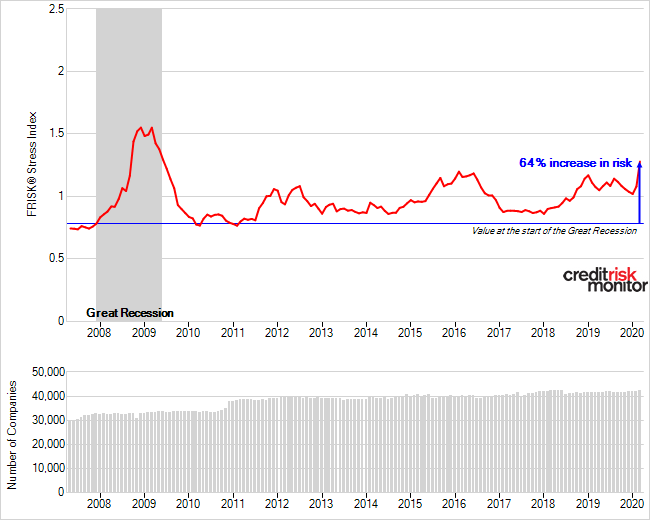 “Ten of the 11 S&P 500 sectors have lower growth rates for the quarter than they did in December. What's more, 72 S&P 500 companies have already warned for the first quarter. Weaker earnings will make debt all the harder to pay.”

Earnings declines are being priced in by equity and credit markets, and bankruptcy risk is escalating for companies with high leverage and weak liquidity buffers. Following the coronavirus shockwave, nearly 5,000 public companies out of more than 40,000 have received FRISK® score downgrades. The 96% accurate FRISK® score predicts bankruptcy over a 12-month horizon, using a scale ranging from “1” (worst)-to-“10” (best) with anything equal to “5” or less deemed high risk.

In response to this widespread credit turmoil central banks worldwide, including the Federal Reserve, European Central Bank, Bank of Japan, and Bank of England, are providing monetary stimulus by cutting interest rates back to the 0% lower bound. Additionally, central banks have restarted quantitative easing programs, where for example the Fed stated it would commit to $700 billion in asset purchases for treasuries and mortgage-backed securities.

The Bank of Japan and Bank of Australia have already implemented a policy known as “yield curve control” to tame sovereign yields, and the Federal Reserve is considering this policy, particularly as long-dated treasuries have sold off immensely in March 2020. Most of all, the U.S. government is also introducing a $1.2 trillion stimulus package to support businesses (including $58 billion in loans to airlines) and households as jobless claims are expected to top 1.5 million next week. While these initiatives will help to cushion an economic downturn, governments and banks cannot afford to bailout every distressed creditor.

CreditRiskMonitor anticipates tighter access to credit in the years ahead and an escalation in bankruptcy filings – if we’re not heading for a recession, it may be a depression. Now is the time to onboard with CreditRiskMonitor to receive a comprehensive risk assessment to monitor which of your counterparties are at increased risk of bankruptcy.