Prices have increased in some U.S. coal producing regions during 2018, but the industry continues to rapidly consolidate. In late 2018, CreditRiskMonitor detailed the downfall of Westmoreland Coal Company and its Chapter 11 filing through a Bankruptcy Case Study. Two other operators, Contura Energy and Alpha Natural Resources, recently completed their merger and combined to be a massive producer by tonnage volume. Further still, another has come under pressure in recent weeks: Cloud Peak Energy Inc. 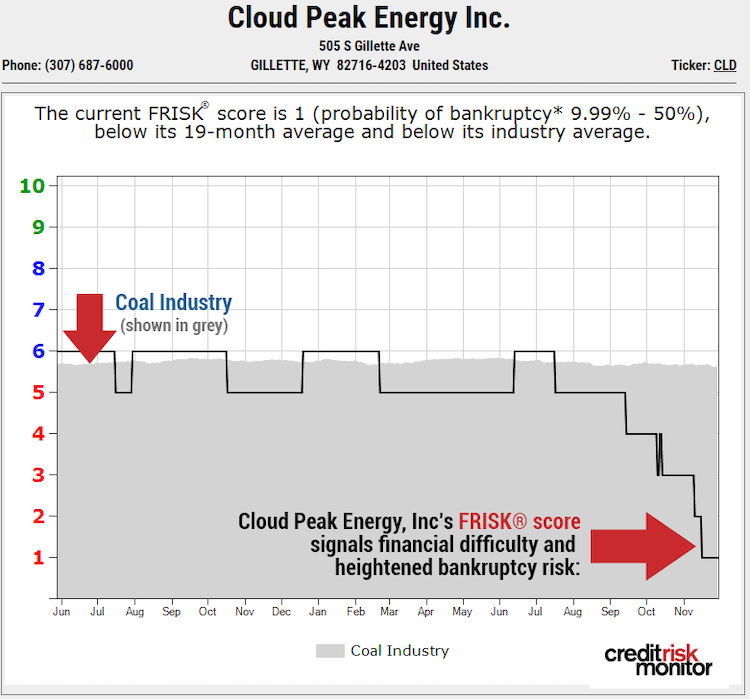 It’s important to note that the warning signal provided by the FRISK® score is significantly more accurate and timely than the Altman Z’’-Score (which is very similar to traditional financial models, which are updated on an interim basis, used to assess credit risk). Why does the FRISK® score outperform the Z’’-Score? The FRISK® score uses a variety of data components (including market data, financial statement ratios, proprietary subscriber crowdsourcing, and credit agency ratings when available) and is dynamically weighted to use each ratio appropriately. These sophisticated model attributes ultimately provide risk professionals with an edge. 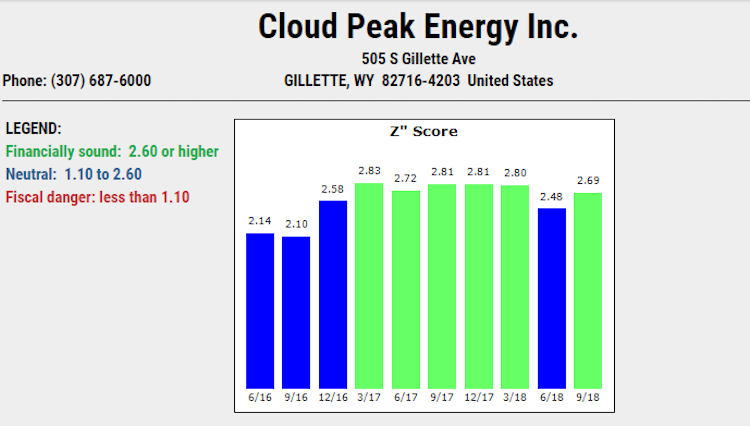 Unfortunately, the Z’’-Score in this particular case is providing users with a misleading signal. In the last year, Cloud Peak Energy has become financially stressed based on eroding margins, shrinking liquidity and increased leverage. The FRISK® score has picked up on all of these issues with Cloud Peak Energy's score declining to a worst-possible mark of "1" – providing subscribers an important and early warning of financial stress.

Cloud Peak Energy sells thermal coal from the Powder River Basin which spans parts of Montana and Wyoming, which has the lowest coal price contracts across any index in the U.S. The company’s management explained an undercutting strategy: that pricing will often come below this index in order to win bids because of intense competition.

According to guidance, management has reduced its projected EBITDA range to $60-70 million, well below the previous estimate, partially due to issues at the company's Antelope mine (one of Cloud Peak Energy's three primary producing assets). This estimated range, however, happens to include a one-time postretirement benefit gain of $20 million from the third quarter, artificially boosting the amount forecasted. In other words, annual EBITDA is closer to $45 million at the midpoint.

This deterioration in operating performance is troubling. Most pressing to us is that Cloud Peak Energy reports bottom quartile gross margins compared to coal industry peers. The trailing 12-month gross margin of 10% is due to low contract pricing, but it narrows further to 2% when depreciation and depletion costs are included in the calculation.

Forecasted maintenance capital expenditures are approximately $14 million for the year and trailing interest payments are approximately $36 million. Excluding changes in working capital, free cash flow generation becomes limited. Comparing this poor cash flow to Cloud Peak Energy's total debt balance of $404 million makes its debt-servicing ability much weaker. Management has contracted to sell approximately 35 million and 30 million tons of coal in 2019 and 2020, respectively. Pricing is unlikely to rise on a multi-year basis and tonnage volumes appear to be falling based on what Cloud Peak Energy has contracted so far, which would be roughly in-line with broader industry trends.

In mid-November, the company announced the termination of its credit agreement, effectively eliminating $400 million of available liquidity. Instead, management decided to pursue strategic alternatives, and Cloud Peak Energy appears likely to try to either sell itself or merge with another company. With the help of its strategic advisors, the company could very well find a potential suitor. However, this option does come with some risk of failure. If strategic alternatives fall through and performance deteriorates further, the company could be subject to refinancing risk. As of Nov. 13, the company has not defaulted on any of its debt. That said, Cloud Peak Energy currently trades at a significant discount to book value and its total liability-to-market capitalization stands at 11 times – both concerning factors.

The coal industry is rapidly consolidating through both bankruptcy filings and M&A activity. Some operators have been more fortunate than others, particularly when comparing the Contura Energy merger and the recent bankruptcy filing of Westmoreland. Based on Cloud Peak Energy’s weakening financials over the past couple of quarters, it’s important to highlight that the Z’’-Score failed to provide a signal of increasing financial risk, whereas the FRISK® score clearly highlighted it. As a general rule of thumb, the FRISK® score will be significantly more helpful with the risk mitigation process over a traditional financial scoring method because of its dynamic, ensemble approach.

*As backtested on U.S. public companies; results may vary by country.