China’s property developers have been under intense pressure in 2021, which originated from a new Beijing government policy and offshore financing drying up. China Evergrande Group – a company we have tracked extensively in recent months – saw its FRISK® score downgraded in the late spring before reaching the highest bankruptcy risk of “1” by early July 2021. Evergrande defaulted on a bond after receiving a 30-day grace period on Dec. 7 and again on Dec. 30, and could be on the verge of bankruptcy.

The FRISK® Stress Index on the building construction-general contractors and operative builders industry (SIC 15), i.e. property developers, has reached a new record of 2.9 over the 2.6 recorded in October of 2008. This model shows the collective probability of failure over the next 12 months, which spans through December of 2022: 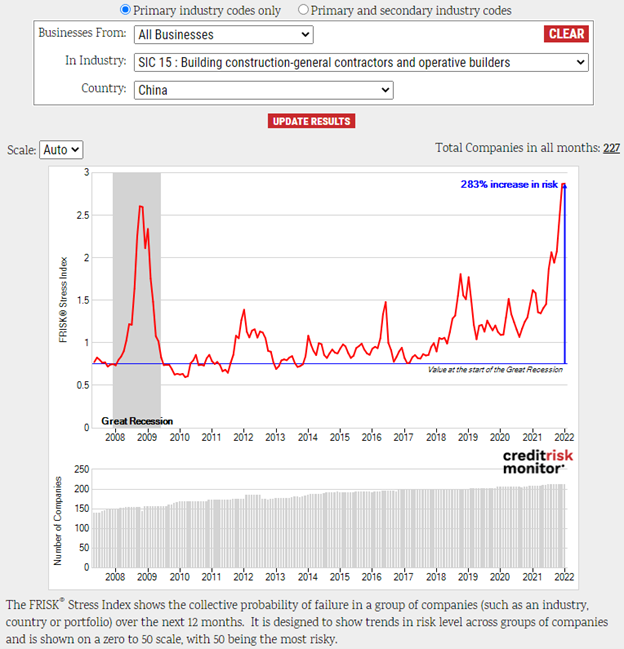 Property sales by floor area are projected to fall by 16% in H1 2022, according to Reuters. With bloated inventories and record debt balances, property developers now must work through a painful deleveraging process. Total liabilities for China’s property sector public companies amount to more than $4.4 trillion USD. Moody’s Investor Service acknowledged in a November research note for the government of China that localized pressures could be significant where prolonged property sector volatility could have a range of impacts to regional and local governments as well as small regional banks and trust companies.

The Federal Reserve’s November 2021 Financial Stability Report stated that China’s property sector distress could even reverberate on a global scale:

““…the ongoing regulatory focus on leveraged institutions has the potential to stress some highly indebted corporations, especially in the real estate sector, as exemplified by the recent concerns around China Evergrande Group. Stresses could, in turn, propagate to the Chinese financial system through spillovers to financial firms, a sudden correction of real estate prices, or a reduction in investor risk appetite. Given the size of China’s economy and financial system as well as its extensive trade linkages with the rest of the world, financial stresses in China could strain global financial markets through a deterioration of risk sentiment, pose risks to global economic growth, and affect the United States.”

China’s central bank (PBOC) is seeking to keep real estate stable and orderly, but the FRISK® Stress Index suggests that this will not be an easy task, noting again that the broader industry bankruptcy risk has reached an all-time high and surpassed levels observed during the 2007-2009 Great Recession, which itself included a housing crisis.

More than 100 public China-based property developers have collapsed into the FRISK® score “red zone”, which includes any score equal to or less than a “5”, indicating above-average risk of bankruptcy over the coming 12-month period. This trail of dominos could start to fall as China Evergrande Group teeters. Total liabilities among this high-risk group totals about $2.3 trillion USD. When carving out property developers most likely to file bankruptcy, i.e. FRISK® scores of “1” and “2,” total liabilities comprises about $1 trillion USD for the 28 entities listed below:

Chinese property developers’ financial leverage towers over the broader industry worldwide, with a median total debt-to-tangible equity ratio about 56% higher and roughly double total liabilities-to-net worth. On Jan. 1, 2021, Chinese authorities instituted a policy known as “three red lines” to curb this borrowing spree, where if a property developer seeks to issue construction loans or corporate bonds, it must meet the following criteria:

None of the 28 property developers above currently satisfy all three requirements. Only Golden Wheel Tiandi Holdings Company Limited marginally met the net debt-to-equity and adjusted liabilities-to-assets ratios yet it still fell below the cash to short-term borrowing requirement. Less than half of the developers were able to meet the cash to short-term borrowing ratio. Separately, the median cash ratio, i.e. cash and short-term marketable securities compared to total current liabilities, among the 28 aforementioned property developers stands at 0.10, which is one-third of the level reported by the global operative builder industry.

Since the start of the COVID-19 pandemic, at least 12 property developers have defaulted on their debt obligations. Accordingly, the option adjusted spread for the ICE BofA Asian Dollar High Yield Corporate China Issuers Index has surged from a modest 6.5% pre-pandemic to 22.7% in December 2021.  We’ve annotated the chart with context for various peaks and troughs. 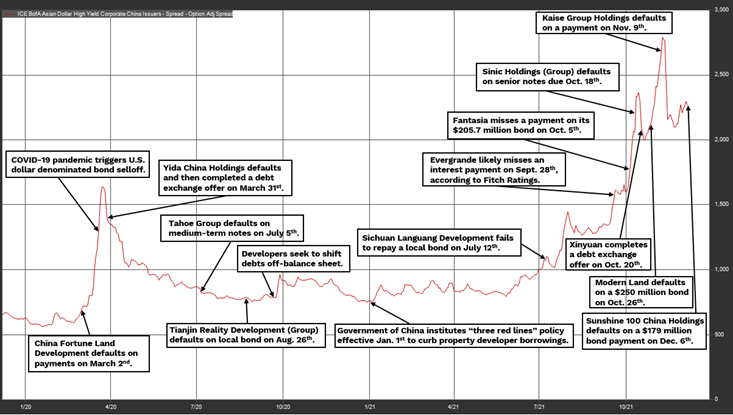 With poor liquidity and limited access to financing due to China’s restrictive policies, property developers are undergoing severe financial distress and reporting widespread defaults, which could end in a cascade of bankruptcy filings. China Evergrande disclosed in a Dec. 6 filing that funds might not be adequate for its financial obligations, plans to engage with offshore creditors to develop a restructuring plan, and recently had its stock trading suspended. For a more in-depth review on Evergrande’s financial challenges, read our High Risk Report.

Evergrande reported H1 2021 total assets of $373 billion. The next three largest property developers with FRISK® scores of “1” are no less risky, including Yango Group Co., Limited ($59 billion), Kaisa Group Holdings Limited ($50 billion), and China Aoyuan Group Limited ($50 billion). As of Dec. 7, China Evergrande Group’s secured bonds sold between 15 and 19 cents on the dollar. Onshore debt, deemed to receive better favor relative to offshore debt in China’s insolvency regimes, is trading at around 38 cents on the dollar. In the event China Evergrande Group files for bankruptcy, several other property developers could fall in a figurative domino effect with poor recovery prospects for both secured and unsecured creditors.

Property development represents about 30% of China’s GDP, and China Evergrande Group is only the tip of the iceberg. Ongoing defaults could eventually convert into bankruptcy filings that would shake up the industry. Although the risk is confined to China for now, these issues could spread into other high yield markets, such as the $3 trillion U.S. leveraged finance market. Contact CreditRiskMonitor today to see how we can help you stay ahead of this evolving crisis before it affects your portfolio.