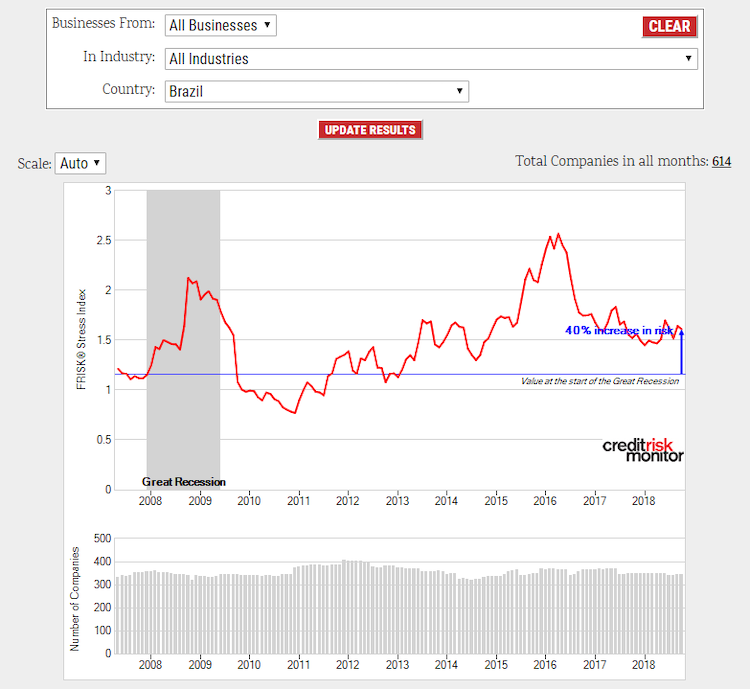 Financial risk has improved in the last few years but it remains elevated at 1.6. This level is still broadly equivalent to the trouble experienced during the 2008 Global Financial Crisis as shown above. Nearly 40% of Brazil’s public companies are in the FRISK® score “red zone,” falling into the bottom half of the FRISK® score scale. The FRISK® score measures company financial risk based on a “1” (highest risk) to “10” (lowest risk) scale. The red zone indicates that a company is financially stressed and has an elevated probability of failure, as shown in the chart below:

One noteworthy example is Liq Participacoes SA. This large operator offers customer relationship management and marketing. Some of Liq’s customers are located in Brazil and throughout Latin America. Its sales have declined by double digits for several years, where a portion of lost revenue was due to Oi SA, one of the major telecom providers. Oi SA filed for Judicial Reorganization in mid-2016 and had to make significant cuts to its operating structure. Other customers also cut spending, which has negatively impacted Liq.

Liq’s FRISK® score has fallen from a “3” to a “1” within the last 18 months, highlighting extreme financial stress. A score of “1” indicates a 10-to-50% probability of corporate failure in the coming year. 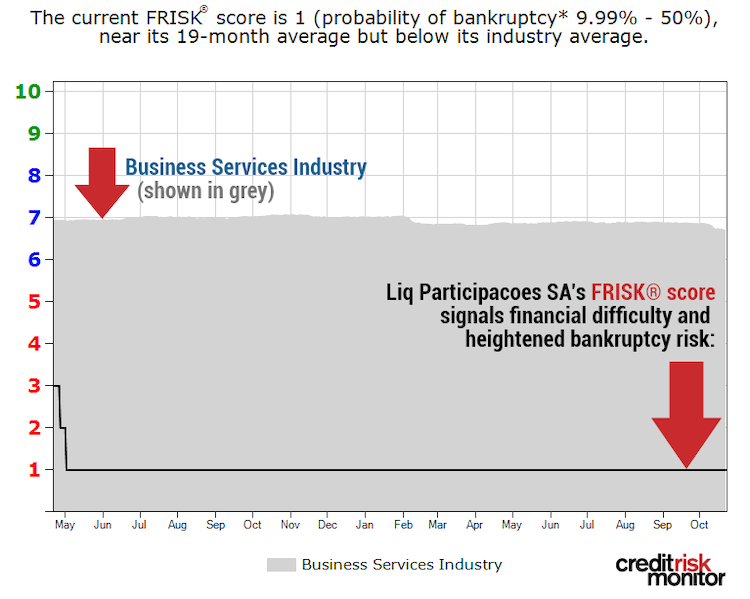 Liq completed a distressed debt exchange during 2018, paring down its outstanding debt. However, the company’s total liabilities relative to total assets still measures an extremely high leverage ratio of 95%. Tangible net worth has also been persistently negative.

Regarding performance, annualized net sales are 1.5 billion Real (or $400 million), but its gross margin has fallen to negative 2% on a trailing 12-month basis. This trend reflects aggressive competition and the lack of pricing power afforded by its business model. Simply layering in selling, general and administrative expenses, as well as interest costs leave the company generating massive net losses. With negative free cash flow on the horizon, liquidity will be significantly pressured in the coming 12 months. Those who do business with Liq need to monitor the company’s dwindling cash position, which could lead to corporate failure if performance doesn’t improve.

Brazil maintains a junk sovereign credit rating, whereby borrowing rates are expensive and business conditions broadly remain weak. If the Brazilian economy were to make a turn for the worse – which could stem from either internal or external factors – red zone corporations would be severely exposed. Liq Participacoes SA is just one example that has deeply suffered from long-lasting weakness in Brazil’s economy. Unfortunately there are many more troubled names to watch in the country, with about 40% of Brazilian public companies in the high-risk FRISK® score red zone. If you do business with any international company, the CreditRiskMonitor service can help protect your business.