This past July, just before Amazon.com, Inc. (Nasdaq: AMZN) acquired grocery chain Whole Foods, a rumor began to circulate that the trendy online retailer might try to start up a fresh food delivery service. Much to Blue Apron Holdings, Inc.’s (Nasdaq: ARPN) dismay, the rumors were confirmed in November when Amazon announced a partnership with Allrecipes.com. Through this partnership, Amazon and Allrecipes present “AmazonFresh,” a delivery service nearly identical to Blue Apron’s prepared meal kit model.

This news, in conjunction with Blue Apron’s weak financials, puts more pressure on a company that's already struggling. CreditRiskMonitor’s proprietary FRISK® score indicates a company's level of financial stress based on the probability of bankruptcy over a 12-month period, with a 96% accuracy rate. The FRISK® score is calculated on a scale of “10” (the least amount of risk) to “1” (highest risk).

The FRISK® “red zone,” which spotlights companies with a score of “5” or lower, indicates the most dangerous bankruptcy risk tier. Blue Apron’s FRISK® score in the five months since its summer IPO has fluctuated between a “2” and a “4.” Thus, the company should be watched closely.

Blue Apron's July IPO provided it with a much needed cash infusion and quite literally afforded management the opportunity to buy more time to right the ship. Despite being heralded as an innovator in a chic mail order industry – and being the first U.S. prepared meal kit company to go public – a deep dive into its numbers tells a troubling story.

For example, Blue Apron’s sales have fallen for three consecutive quarters, from a pre-IPO $244.8 million in March of 2017 to $210.6 million in September of 2017. This worrying trend is plain to see when subscribers examine CreditRiskMonitor's financial statistics for Blue Apron: 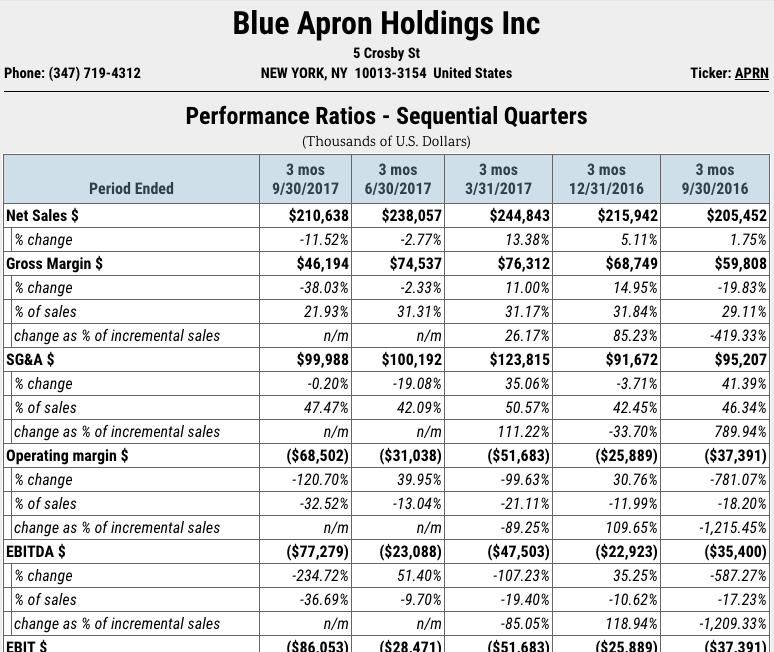 Volatility in the Chain of Command

To complicate things further, Blue Apron CEO Matt Salzburg stepped down recently and transferred his responsibilities to the company’s CFO, Brad Dickerson. Bloomberg reports the executive shift points to the potentially unfixable issues associated with a weak business model. Investor faith is steadily declining, which is reflected in the stock price: Blue Apron shares have fallen more than 60% since their IPO. This makes its stock one of the worst performing IPOs this year, according to Bloomberg.

With around $270 million in cash and a quarterly cash burn rate of $75 million, Blue Apron’s incoming CEO will inherit a time-sensitive challenge to push continued innovation and deliver the company from onerous debt.

Blue Apron's red zone FRISK® score of “4” is providing an early warning to financial counterparties. If you conduct business with this company or are considering doing business with it, we strongly suggest that you allocate the time and resources necessary for regular in-depth reviews of its performance. Additional competition and volatility within the company’s corporate leadership, means a worst case scenario looks increasingly possible.