The Biggest 2021 Bankruptcies and Looking Ahead for 2022

Although bankruptcy trends in 2021 calmed down from the worst of the pandemic during 2020, large public company bankruptcy filings continued to have a substantial impact. Among the largest bankruptcies, the 96%-accurate FRISK® score reliably forewarned CreditRiskMonitor subscribers of the financial risk they faced with ample notice. In this group of the largest bankruptcies from 2021, total liabilities approached $77 billion, which delivered material losses to creditors and disruptions to global supply chains.

In 2021, the highest-profile bankruptcy filings came from industries such as retail, airlines, construction, and, most frequently, the oil & gas operations and oil well services & equipment. The weakness in the broader economy negatively affected these cyclicals. Enter the FRISK® score, which accurately identified all major public company failures in 2021. With 100% reliability, the FRISK® score allowed our clientele to proactively manage their biggest dollar risk exposures early and effectively. As a baseline, we have correctly identified 96% of public company bankruptcies at least 3 months beforehand.

This final factor, representing the hivemind sentiment of key credit decision-makers at more than 35% of the Fortune 1000 plus thousands of other large companies worldwide, is a key leading signal that updates daily and significantly enhances the risk categorization of financially distressed companies. A FRISK® score of "5" or less on the "1" (highest risk)-to-"10" (lowest risk) scale indicates material bankruptcy risk that needs to be monitored closely.

For the companies listed below, rocky fiscal performance and swelling debt ultimately necessitated bankruptcy. If any of the 19 companies below are directly in business with you or have dealings with a key counterparty of yours, here were their FRISK® scores directly before filing:

Total liabilities are sourced from the last fiscal period prior to the bankruptcy filing and calculated in USD ($) currency.

The 2022 outlook as it relates to bankruptcy is, in a word, bleak. Nonfinancial corporate debt stands at all-time highs. Central banks continue to signal monetary tightness, and with interest rates almost assuredly going up before EOY, borrowing costs are also expected to rise. Companies that are dependent on variable-rate bank loans, carrying near-term maturity walls, and/or are dealing with underlying financial stress will face a much bigger challenge in avoiding bankruptcy than in 2021. Moreover, the FRISK® score’s cumulative list of high-risk public companies has grown by 30% and 10% for the U.S. and worldwide, respectively, since November of 2021. 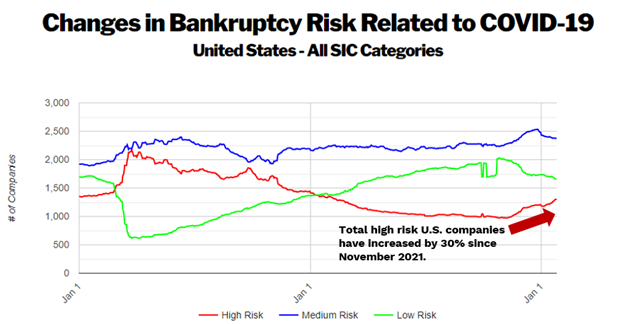 If one chooses a worldwide view, more than 1,000 company FRISK® scores fell into the red zone in the last three months. Altman Z’’-scores, by contrast, remain unchanged during that same stretch. This points out a keen advantage enjoyed by FRISK® score disciples: divergence comes from unique data components of stock market performance and subscriber crowdsourcing, which update the FRISK® score daily instead of quarterly. CreditRiskMonitor subscribers have found that they can take advantage of this asymmetric information to make more informed business decisions to deliver better outcomes, i.e. moving more quickly to adjust credit terms or sourcing products/services from alternative suppliers.

The list below shows a handful of the most distressed companies:

Although 2021 bankruptcies were relatively placid compared to the damage incurred during the peak of the 2020 pandemic, cumulative liabilities still amounted to $77 billion among the largest public companies. With the macroeconomic picture rolling over in the early part of 2022, risk professionals must promptly review their portfolios for building bankruptcy risk. More and more leveraged companies worldwide are becoming risky.

The lists above are but a sampling of real-life examples where bankruptcy could be the ultimate outcome, one of which is already ending with winding up proceedings. Not sure where to start? Contact CreditRiskMonitor to see how we can help you stay ahead of the 2022 bankruptcy spike.