The retail industry is ever-changing and signs of contraction are rampant, especially amongst the large box store sellers. Change in consumer behavior coupled with highly leveraged companies and a turn toward supporting niche, rather than national, brands has been troublesome for the retail market. CreditRiskMonitor offers subscribers, including risk professionals from more than 35% of the Fortune 1000, powerful tools such as the FRISK®️ score – a solution proven 96% accurate in identifying public company bankruptcy risk over the coming 12-month period – to help protect against such risks.

Household names like J.Crew Group, Inc. and Revlon, Inc. have been labeled as high risk for bankruptcy in our findings since last fall. What’s more, giants such as Toys “R” Us, Inc. and Bon-Ton Stores, Inc. showed signs of financial distress for 12 months or longer and ultimately did end up filing for bankruptcy in that same timeframe. Contraction – the conservation of resources in an economic downturn – would pose an even greater threat to the big fish already troubled within retail industry, which we shall cover below. 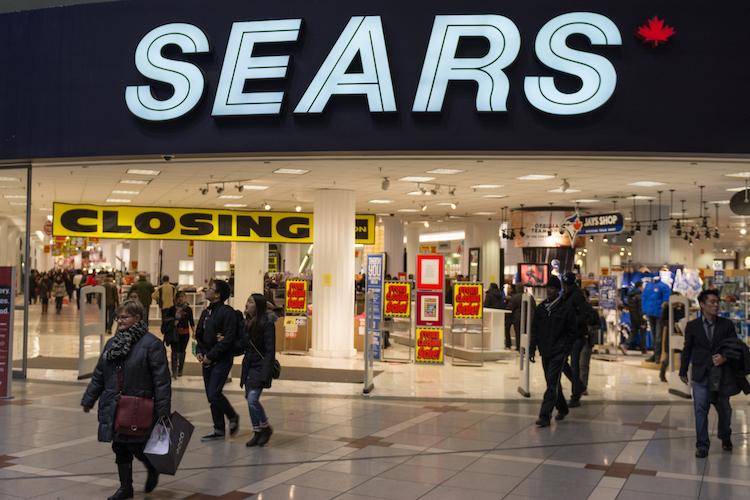 Once popular in malls across the country, Sears Holdings Corporation has been struggling for several years. The corporation has closed hundreds of Sears and Kmart stores as it struggles to turn its business around. The company’s FRISK®️ score has been at a worst-possible score of “1” for not only the past 12 months, but for more than 24 consecutive months dating back to 2016. Sears’ troublesome financial outlook has been oft-reported in the news and remains on the minds of CreditRiskMonitor subscribers. Contributing to the company’s risk are a high debt-to-assets ratio, negative stockholder equity and negative tangible net worth.

When it comes to a healthy debt-to-assets ratio, companies are in a best case-scenario when this ratio is about 30% or lower, as this gives the company a better chance of properly servicing their debt load in a contraction situation. Sears’ debt-to-assets ratio as of May 5, 2018, is 71%: a spike from 47% in April of 2017, nearly one year prior. To make matters worse, Sears currently has negative tangible net worth of $5.5 billion, driven largely by negative shareholder equity of $4.1 billion.

These current figures, though staggering, are nothing new for Sears. The company’s tangible net worth has been in the negative in each of the last five years, with stockholder equity falling into negative territory in 2015. Sears’ debt-to-assets ratio, meanwhile, was at a healthy 23% in 2014, but had made a more gradual descent into an unhealthy realm before the recent plunge to its current, worrisome percentage.

Traditionally a seller of high-end and luxury brands, Neiman Marcus has had to shift gears in an effort to stay competitive with retail competitors such as Macy’s. Neiman Marcus has introduced new brands and continues to stay committed to customer service, which has garnered the faith of its suppliers, which appear to be providing supportive trade terms. The company’s FRISK®️ score, meanwhile, has been at a bottom-rung “1” for more than a year. Contributing to the company’s low score are negative tangible net worth and high leverage.

Though Neiman Marcus is showing signs of improvement, the company’s tangible net worth is still deeply negative and has been for the last five years. As of the most recent reporting on Apr. 28, 2018, the retailer’s tangible net worth was negative $3.8 billion. The company’s debt-to-assets ratio, which currently comes in at 60%, is a figure double that of the aforementioned line of demarcation from healthy companies, 30%. This suggests Neiman Marcus could have trouble servicing its debt loan, especially if an economic contraction takes a bite out of sales or suppliers become more demanding.

In November 2017, on the eve of the annual best revenue time of the year for retailers leading into the Christmas holiday, we released our High Risk Report on J. C. Penney. The company’s FRISK®️ score had sunk to a lowest-possible “1” as the once-popular department store couldn’t seem to pull itself out of the financial stress it had been experiencing for over 12 months, irrespective of seasonality.

Its FRISK®️ score hasn't improved much as the company progresses through 2018. Contributing factors to J. C. Penney’s financial woes include recurring net losses, troublesome cash ratios, and, like the other two names here, high leverage.

The most recent quarter witnessed a loss of $101 million, more than double the quarterly loss from the same quarter a year ago. Debt is a big problem, with total debt exceeding the company’s net worth by three-and-a-Half times and a debt-to-assets ratio of 52%. Although J.C. Penney's FRISK®️ score has bounced back up to a "2", it is still a financial counterparty that deserves immediate and close attention. In the event of a contraction, its strained financial situation could quickly get worse.

The retail industry is undergoing drastic change and famous brick-and-mortar anchors are finding it difficult to stay competitive. Compounding the issue in some cases are burdensome debt loads.

At this point though, and with an economic downturn looming, it might be too late for struggling retailers with leveraged balance sheets. Using the FRISK®️ score as a first line of defense, risk professionals have the ability to mitigate such risk before it becomes a problem. Being proactive in addressing such risks will be key to maintaining a healthy portfolio in a contraction economy.