The healthcare sector and many of its subsectors in 2018 are performing quite well. A look at financials of huge players in healthcare will show you that this trend should continue in the near future, too, because of a consistent, non-elastic demand and the research-driven nature of healthcare.

Yet not all public companies within healthcare are healthy. In fact, nearly 100 healthcare companies rated by CreditRiskMonitor’s FRISK®️ Stress Index – including recently bankrupt Hooper Holmes, Inc. – have a FRISK®️ score of “5” or lower, a 96% accurate barometer indicating heightened risk for bankruptcy within the coming 12 months.

Contraction in credit, as discussed at the start of this series, is precisely as it sounds: Lenders deal with an economic slowdown by limiting new lending, slashing existing credit lines and are generally trying to conserve resources. Companies, meanwhile, are forced to pull back on buying and spending in response. Highly leveraged companies may lack the cash needed to offset such a slowdown in lending and spending. This can set them on a course toward financial downfall. Even in thriving industries like healthcare, a company with a worrisome debt load would be tremendously handicapped when – not if – the economy falls into a contraction phase.

Making matters worse, corporate debt levels today are higher than they were at the start of the Great Recession. Here are three healthcare names we are watching today.

Based in Franklin, Tenn., and considered the largest hospital and acute care provider in the United States, Community Health Systems has held a lowest-possible FRISK®️ score of “1” dating back to Q4 2017. This suggests that the company has a 10-to-50% probability of bankruptcy in the upcoming 12-month period. High-risk factors contributing to Community Health Systems’ financial distress include negative tangible net worth and a troublesome debt-to-assets ratio.

Community Health Systems has reported negative tangible net worth for five consecutive fiscal quarters. In the most recent quarter ending June 30, 2018, the company’s reported figure was negative $5.60 billion, a 15% year-over-year increase. Further investigation shows that negative tangible net worth has been a problem for much longer than this 15-month stretch, with the company reporting negative figures for the last five calendar years. 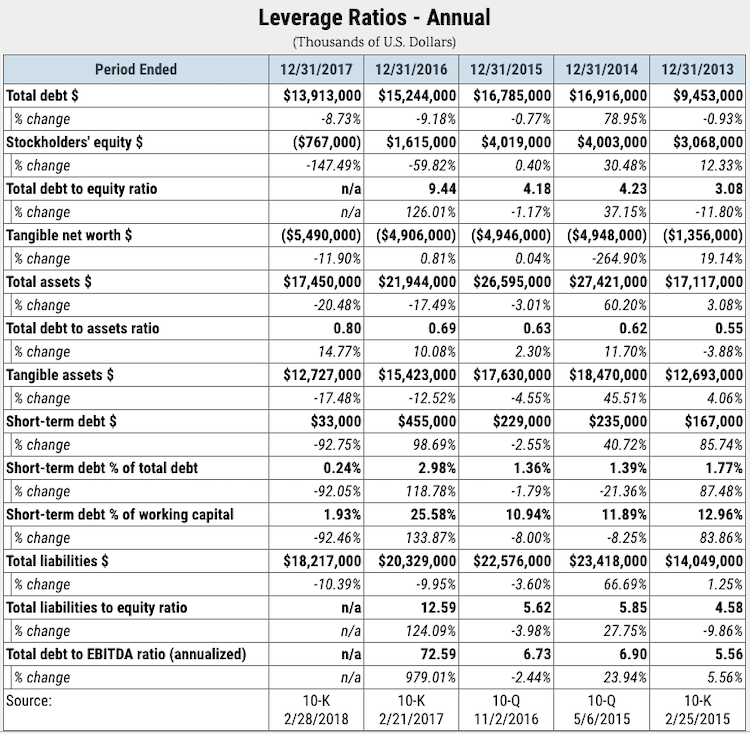 Based out of Vista, Calif., DJO Finance is a maker and distributor of medical devices such as knee braces, compression products and reconstructive joints. These devices are designed to improve mobility and vascular health and aid in pain management. Though the company provides a broad array of popular and needed devices, its financial situation is concerning. For the past 12 months, DJO Finance has not been able to move up from the lowest possible FRISK®️ score of “1,” suggesting heightened bankruptcy risk in the next 12 months. As with the companies noted above, DJO's negative tangible net worth and weak debt-to-assets ratio have both been an ongoing source of concern.

DJO Finance has reported negative tangible net worth for the past five sequential quarters, and the problem has been plaguing the company since 2013. Of the three companies here, DJO Finance's debt-to-assets ratio is most dire at 121%. This ratio has grown steadily worse over the past five years. With debt outweighing net worth, DJO Finance would likely find it very difficult to turn a profit in an economic contraction. Note that it hasn't reported positive net income in any of the last five years -- a period of expansion for the economy as a whole.

Headquartered in Kennett Square, Penn., with post-acute facilities all over the country, Genesis Healthcare, Inc. first caught our attention near the end of 2017. Currently, Genesis’ FRISK®️ score is “3.” The company has been struggling with high leverage and negative stockholder equity for the past five sequential quarters, all of which contributes to that bottom-dwelling FRISK®️ score ranking.

Genesis Healthcare’s tangible net worth has been sinking for the past five sequential quarters. Like Community Health Systems, the company has been struggling with this issue for many years, going back to 2014 in this case. Negative shareholder equity, meanwhile, suggests that there would be nothing left for shareholders in a liquidation scenario. And taken together, these metrics suggest Genesis has limited access to additional capital via the equity or debt markets should it need cash.

Meanwhile, even though the company's total debt-to-assets ratio isn’t as high as Community Health Systems', it is still elevated at 48%. With weak occupancy trends in the skilled nursing industry and a shift from large, national companies to regional and local builds, it will be very hard for Genesis Healthcare to recover from its already cumbersome debt load and regain stockholder trust. And things will only look that much worse when the economy starts to contract.

Contraction will inevitably happen – perhaps sooner than many think – and there will be giant healthcare companies which will receive a terminal prognosis because of this. With nearly two thirds of public companies holding non-investment grade credit ratings, it's more than likely that a highly leveraged company touches every counterparty and could produce a calamitous chain reaction. Though interest rates are still low, an economic contraction could lead to financial loss if risk professionals do not take measures to protect themselves now.

The FRISK®️ score is a first line of defense and risk professionals will find it a valuable tool that alerts our subscribers to companies of concern, like those noted above. Equally important here is that these financially weak healthcare companies operate in what would otherwise be considered a financially robust sector, seemingly thriving despite a hefty debt load. Now is not the time for complacency, it is the time for a thorough review of your risks so you can prepare for the next economic downturn before it happens.