There has been a rising tumult in the water transportation industry since the Great Recession a decade ago. According to the FRISK® Stress Index, in 2018, the probability of failure for the industry compared to all others examined daily by CreditRiskMonitor remains 41% higher than all other industries.

New Jersey-based Rand Logistics, Inc., has been heavily scrutinized by our subscribers for several years now. Our proprietary FRISK® score, which is 96% accurate in predicting U.S. public company bankruptcy risk within a 12-month window, showed that Rand plummeted to a "1" in July of 2017 and never rose back above a "2" in the months leading up to their bankruptcy. Note that even in a struggling industry such as shipping, the FRISK® score median hovers above the "red zone," or any score at "5" or below which would indicate a heightened probability of bankruptcy: 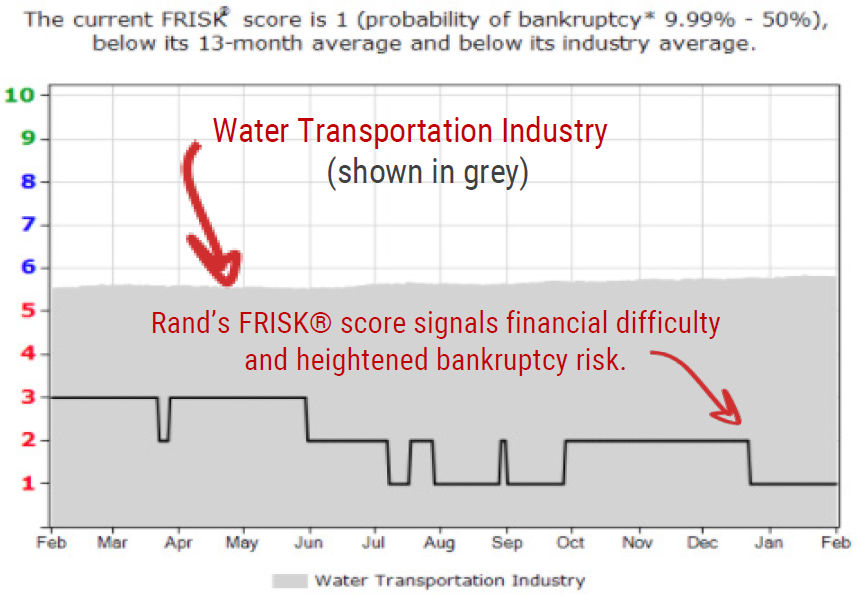 This Bankruptcy Case Study showcases the pain points Rand Logistics, Inc. stakeholders felt as they either abandoned or continued to work with the company. For instance, a subscriber with Rand Logistics in their portfolio would have found that the company's total debt in relation to equity increased significantly from 2016 to 2017, ballooning three times in size in 12 months' time. Still following the journey from 2016 to 2017, the company reported net losses in three of the last five fiscal quarters in what amounted to a 40% decline in year-over-year net income. As 2018 began, the company was delisted from NASDAQ and a few weeks later, Rand Logistics, Inc., and six affiliated debtors filed for Chapter 11 protection on Jan. 30.